He makes dragons fly for a living.

Samir Hoon grew up fascinated by cinema, but after watching James Cameron's 1989 underwater masterpiece, The Abyss, he knew he had to get into visual effects. Cut to the present day, when Samir's working at George Lucas-founded premiere VFX studio, Industrial Light & Magic.

After cutting his digital teeth on movies like Twister, Terminator 3 and Star Wars Episode III: Revenge Of The Sith, Hoon turned Visual Effects Supervisor with The Adventures Of Sharkboy and Lavagirl in 3-D. His second film, however, is the biggie.

Eragon is based on the bestselling Christopher Paolini novel, and like JK Rowling fans have demonstrated, readers can be manic about detail. "It's essentially a good versus evil story, and while we were still working on Eragon, the second book came out, and everything changed," grins Samir. "The book went straight to number one, and actually dislodged the last Harry Potter novel. So suddenly we realised that hey, we're on to a big trilogy, and everything became huge."

By huge he means both budgets and expectations. Readers are fanatic about loyalty to the source work, and Samir's big task was in bringing Saphira to life. "Saphira is the main character in the movie. It's important to realise she's a character, not a creature. She communicates with the boy, which in itself is a challenge, because at the end of the day, she is a giant lizard. No matter how you look at it, dragons don't exist and there are major limitations in terms of crafting her expressions. You can't make it so anthropomorphic that it looks human because she needs to be animalistic. You have to make sure you don't cross that line. So we need human-looking eyes and some expressions, and the rest was animalistic."

So then it came down to research, as the team studied animals, everything from textures and movements of wildebeests, lions and even puppies -- for baby Saphira, naturally. 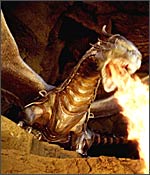 "Another challenge was that she's a blue dragon, and you never see such large blue creatures in real life. And we had to keep her blue. Her name is derived from 'sapphire,' and she's described as a blue dragon. We were shooting over a five-month period, and when some kids visited the sets, the producer sent them to me, saying 'Hey, you gotta go talk to Samir; he's the guy making the dragon.' So the kids came up to me and they're like, 'Is Saphira blue?' And I asked why, what if she wasn't. 'No, she is blue!' All right, she's blue, don't' panic."

Another trouble is with flight. Does a dragon fly like a bat? "It's an extremely important question. We wanted the movement to be very different from any other dragon movie done so far. We started out with batwings, but then it developed. So we developed scales. And all this happened when we were making the character, so while this can be problematic when we're doing it, that's the fun part. She was really a creature of discovery."

"People think VFX is a black box," Samir says. "And it's true. Even now, people don't understand the process. And it's tough on the director and the actor, because I'm telling Jeremy Irons that there's no dragon there and asking him to pretend there is, 'there's a ball on a stick and that's your eyeline, follow it' and 'oh, and you can't walk here, you'd step on it.' And telling the director of photography that this is where the camera should come in. So no one really gets the picture until they come in to see the film. Because the team that shoots the film goes away, while the effects people stay till the very end, because their work ends with post-production."

Then films like Sky Captain or Sin City go completely CG (computer generated), working exclusively with actors and blue-screens. Does this mean CG is now a cost-effective

tool? "I certainly think so. It allows you to do things that you can't possibly do, and in places without actually going there. If done well, the audience will never know that you never went there, that you shot it on a blue-screen stage."

"Independent filmmakers could set up some computers, create their own sets, composite the shots," suggests Samir. "CG gives you an option."

The groundbreaking VFX film of the 90s was Steven Spielberg's Jurassic Park, creating photorealistic dinosaurs and making our jaws drop. What's the next step for this generation of cinema? "I think now we're increasingly seeing CG characters play significant parts in the movie. As a character, as an actor in the movie and realistically carry it off. And that is not an easy goal. And I think of late you've seen 3-4 movies that have hit that mark," says Samir, alluding to films like King Kong and Pirates Of The Caribbean: Dead Man's Chest, whose Davy Jones he remains completely smitten by."

"There is a lot of emphasis now on creating realistic human beings, and you could go either way on that. I don't want to see digital doubles, I want to see actors," he declared. "But then there are really difficult action sequences, too difficult for stuntmen. So that's there digital doubles come in."

And how real are these computer clones? "If you look at a digital double walking from the back, it looks great, you can't tell the difference. If you see the face up close, and compare it with a still of the real actor, you can tell. The complexity of how muscles move and how skin reacts, that's where we're all heading now. So expect to see more realistic digital characters in the future."

Indian cinema is more VFX driven than it used to be. Has he checked out the work Bollywood is doing? "I've seen footage from Krrish, and I'm meeting some of the companies and seeing their work in Mumbai, Hyderabad and Chennai. I'm taking a look at the kind of work that's done here and the artists," Samir details. "I'm very encouraged by what I've seen, there's a lot of rawish talent. I think it's an exciting time to be in this field, and companies have to start paying attention to their artists."

He seems to be rather clear on the facts when it comes to taking care of artists. "This is not a piece of code, there is an artist behind it. It's a creative process. Currently, it seems like the attrition level is very high, people keep jumping from companies to companies. You look after your artists, give them good working environments, and show them a path. Indian producers seem limited in their knowledge of the medium, and they need to be told what can be done."

"It's all about learning, and that never stops. I'll always have someone to turn to if I need help, and the luxury of being at ILM," Samir grins, "is that I can turn to someone like Dennis Muren [the VFX legend behind films like Jurassic Park, Star Wars and War Of The Worlds] who's won eight Academy Awards, and he's going to help me out."

So he thinks India is getting itself some real estate on the VFX playing fields? "I think so. I think it's started to happen. I still think it's a long way off. It's not going to be there next year, or in two years time. But I'd be very surprised if in five years, work being done here isn't of a very high caliber. Maybe it won't be the same as the work being done by the ILMs and the Sonys of the world do," he trails off for a second before concluding with a smile.