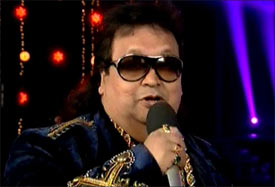 Music composer-singer Bappi Lahiri offers a sneak peek into what to expect in his US concerts this month.

With 465 films in four decades, and his recent chart-busting duet Ooh La La with Shreya Ghosal in The Dirty Picture becoming one of the most popular songs in the last decade, singer and composer Bappi Lahiri won't find it easy to chose the two dozen songs he will sing during his concerts in New York and New Jersey this weekend.

But no one will go home disappointed, assures the portly entertainer.

"It is going to be a high energy show which will have a variety of songs," he says. "There are songs that have become classics in such films as Chalte Chalte, Sharabi, Namak Halal, and Disco Dancer and there will be some numbers that are very close to my heart like the bhajans in the Jai Ganesh album."

Lahiri will be joined by younger singers. "The shows will show the full range of my music," says the composer who readily admits that many of his compositions have been 'inspired' by the work of composers across the world.

"Everyone, from SD Burman to Shankar-Jaikishen, has been inspired now and then. But today, almost every song seems inspired," he says.

While the song Jimmy Jimmy became a huge sensation in India and the Soviet Union, he says a very different kind of song in the same film Disco Dancer was also "phenomenally popular."

"The song is used in a very moving situation in the film and it takes the story forward," he said. "It is one of the most successful songs Rajesh Khanna has sung on the screen, and it will be a tribute to him at my show." (Rajesh Khanna, considered to be Hindi film's first superstar, died last month)

Some of the best songs he has composed for Kishore Kumar, including Pyar Manga in the film College Girl, will also be featured in the show.

"It is for a good reason that Bappida has been around for four decades in the film industry," says Arun Vadhan who is organising the New York concert. "This concert is being held in a lovely auditorium and he deserves the best venue and the best audience."

"I was about 17 when I began my career," says the composer who was born in 1952. "I was about 19 when I began working for Hindi films. I got a lot of encouragement from Kishore Kumar, who is my maternal uncle, and from Lataji (Lata Mangeshkar). Later, I worked with a number of very talented singers including Yesudas, Suresh Wadkar and Chitra, and my shows will try to capture some of the magic that came from these associations."

His album World Peace, Love & Harmony is among his top selling non-movie album.

The album also has a song by his daughter Reema.

"I cannot be confined to just one or two kinds of music," he said. "I love composing disco music and I have enjoyed Jai Ganesh which has been nominated for a Grammy in the world music section. Albums like this are a tribute to my parents who got me into music at a very young age, teaching me to play tabla when I was just three."

When his film assignments began to dry up at the end of the 1990s, Lahiri continued working on his albums and in 2004, he brought out Bappi Magic - The Asli Baap Mix, featuring popular numbers such as Gori Hai Kalaiyan and Jimmy Jimmy.

Many of his admirers are not aware that he composed the score for Jahnu Barua's film, Maine Gandhi Ko Nahin Maara in 2005, reaffirming his versatility.

The next year, he lent his voice to another composer for the first time with the song Boombai Nagariya. The composing duo Vishal-Shekhar used the popular song in the film Taxi Number 9211 and last year, they produced the bigger hit, Ooh La La with him for the hit film Dirty Picture. In between, he sang an important situational song for Mani Ratnam's Guru which was composed by A R Rahman.

"Bappida is amazing," Rahman said. "He flew from Kolkata one morning. We recorded the song in just about two or three hours, and he took the evening flight back home."

Lahiri is upbeat about many things but not about the music being produced today. "Where is the kind of music that R D Burman created for the movies Aandhi and Amar Prem?" he asks.

Much of the fault lies in the bad lyrics, he says. When it's pointed out that many of his films had inane lyrics too, Lahiri replies, "We were at least aware of the need for good lyrics and often we succeeded."

The rings and malas he wears in abundance are signs of his devotion, he says. "Without God, I would not have been here," he muses, quickly adding that his parents also played a very big role in shaping him.

"All these years, I have never forgotten what my parents have given me, and that is why I take special pride in composing music based on ragas and used folk music in films like Apne Paraye," he says.

Even his fans are surprised to discover that a beautiful piece of classical music or a soothing folk-based melody was devised by him.

He is happy with the moniker Disco King and his own website proclaims him to be one, but he also prides himself on his versatility. The songs in Namak Halal and Sharabi in particular have shown that he can compose soothing and soul stirring melodies.

Some of his most successful music was for films that featured Jeetendra, one of the biggest stars of the 1980s. Together they gave a dozen hits, including Himmatwala.

This music was very different from the melodies he composed for films such as Sharabi. "I had to provide music that a situation in a film required," he says. "With Amitabh Bachchan in the lead, the music of Namak Halal and Sharabi had to be very different from many other films and I enjoyed that challenge, too."

Son of Aparesh Lahiri, a Bengali singer famous for his folk songs, and Bansari Lahiri, a musician and singer well-versed in classical music and Shyama Sangeet, Bappi Lahiri says his parents trained him in every aspect of music.

He, in turn, has taught his son Bappa to be versatile, he says, "and my daughter Reema who has sung quite a few good numbers is also very knowledgeable about different kinds of music."

His son has composed songs for nearly a dozen films. "I did not have to tell him anything, to do this or that," says the proud father. "He has been with me since a very young age, just the way I started learning music from my parents when I was about three."

His son has also worked on remix versions of some of Lahiri's famous songs. "He wants to write his own kind of music and has the courage to reject the suggestions of some producers that he should use an Indonesian or Iranian song. He knows in the long run his independent attitude will win. Personally, I think it will take him just about two or three years to make a very big impact."

Bappa Lahiri is aware that he is not just Bappi Lahiri's son. "He is also the grandson of Aparesh Lahiri and Bansari Lahiri," his father says. "He is aware of the legacy." 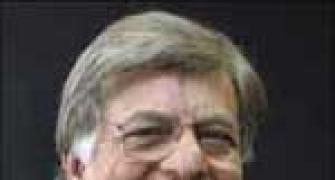 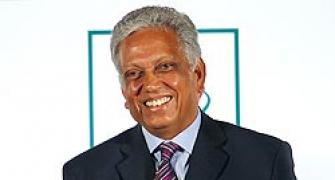 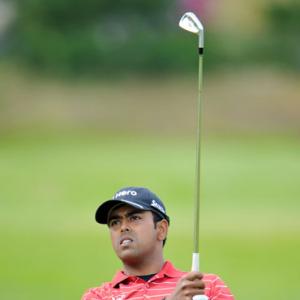 British Open: Hole-in-one icing on the cake for Lahiri

Anirban Lahiri sinks hole in one in third round