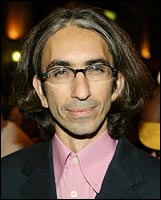 But the London-raised director has suddenly become hot.

For, after making two modestly budgeted films (Shopgirl reportedly cost about $35 million), Tucker is getting ready to direct The Golden Compass from the widely popular His Dark Materials trilogy by Philip Pullman. In England, the book is known as Northern Lights.

The film, based on London-based Pullman's worldwide bestselling series, is being produced by New Line, the Hollywood company that also produced the popular and respected The Lord Of The Rings films, which won many Oscars.

His Dark Materials follows 11-year-old Lyra Belacqua as she journeys with a demon to the frozen wastelands of the north as they try to save children from evil Gobblers. She is also trying to rescue her father from being held captive by talking polar bears.

'I met Anand recently, having admired his film Hilary And Jackie [Tucker's 1998 film of sibling conflicts], and we had a long and encouraging conversation,' said writer Pullman in a statement. 'I was very impressed by his knowledge of the story and his passion for it. He has plenty of very good ideas, and he isn't daunted by the technical challenges.'

Tucker, whose father changed his last name from Thakkar, is a two-time BAFTA (British equivalent of the Oscars) nominee and the winner of the British Independent Film Award for Best Director for Hilary And Jackie. The film brought Oscar nominations to Emily Watson and Rachel Griffith and became a modest art-house hit.

It was inspired by the true story of two sisters, one of who is the world-famous cellist Jacqueline Du Pre, who lost her ability to play music because of multiple sclerosis that eventually took her life in the mid-1980s. The other sister is more of a wallflower but her hidden emotions are slowly brought out in the film.

Shopgirl tells the stories of three people, an elderly businessman with roguish charm (Martin), an emotionally drifting young woman (Danes) and a clumsy, struggling young man (Schwartzman) who is also part of the triangle.

Tucker's Shopgirl had its world premiere at the recent Toronto International Film Festival where it was one of the better-reviewed films. The director spoke to Arthur J Pais. Excerpts:

You are making a big jump from a comparatively small film like Shopgirl to the Golden Compass in the Pullman series. Are you worried about the change of pace?

Not at all. And I also know that the new film is basically a story about a little girl who's looking for her family. I see the Golden Compass as yet another film that is full of emotions and life's trials. And in that sense, it is not unlike the two movies I have directed.

Budget-wise, this is going to be a big film, isn't it?

It could cost about $100 million, more than two times the budget of my previous two films. But then again what interests me about it is that it is still a story filled with emotions.

How did you get the project, given there was intense competition?

Persistence. I had a detailed treatment, with even sketches, and I approached New Line [the producers] with it. I have been lobbying and pitching this film even as I have been working on Shopgirl and other projects that did not come through.

How long have you been trying to get this film project?

Ever since the book came out, about 10 years ago. From the day I read the book, I have been passionate about it and now it feels like forever. I knew exactly how I was going to adapt the story, with its magic, witches and adventures, for the big screen.

What attracted you most to the books?

I have said this is a dream come true. There is magic in [the series] that touches the young and old. And, like the best of literature, the story has universal appeal. I love the theme. For, it is about a reluctant hero whose destiny is to save mankind. I was reminded of those first magical experiences of my childhood when I began reading books.

What kind of films appeal to you?

I am a sucker for stories with strong emotions. I can watch for hours the classic melodramas Hollywood made in the 1950s and 1960s.

Some critics run down melodrama, don't they?

I have never been concerned with that. I believe melodramatic films can be intelligently made.

What makes you feel so strongly about it?

The many great melodramas I have seen. And my own films. When I made Hillary And Jackie, some critics wrote that it was a melodrama. That was perfectly fine with me. I have never ceased to admire melodrama.

I believe melodramas -- books and films -- are about trying to reach a bigger truth about emotions. And something that touches people and makes them think cannot be anything but admirable.

Why is that it took you over six years to make a film since Hillary and Jackie opened?

[Sighs] That is how this business works at times. There were a couple of movie projects I worked on. Something happened at the last minute, and there was no budget. Even with Shopgirl it looked like the project was going to collapse. I was also a co-producer on the film Girl With A Pearl Earring that also opened at the Toronto International Film Festival. It was quite a success in many countries.

How was Shopgirl revived?

Ashok Amritraj, who made the hit film Bringing Down The House with Steve Martin, came forward to make Shopgirl. And Disney stepped in because of Amritraj's co-production deal with it.

Were you overwhelmed with directing the project?

Frankly, I was a bit worried at the start. Steve not only originated the role (of an older man manipulating a much younger woman), he was going to play it too. And he had written the script. Besides, he was also one of the producers.

How did you overcome the worry?

As we had had quite a few chats, we knew we had a similar vision for the film. Steve has been around for a long time in the movies, and he knows what it is to work with a team.

I also knew that I was the director. And that I had to take ownership of the film. But all this came through nicely, without friction or prolonged worries.

Did Martin drop by when he wasn't shooting his part?

A few times, more to encourage the actors and I guess, boost everyone's morale.

What are you thoughts on the essentials for a good film?

A script that makes allowances for intriguing developments is very important. Then, of course, the actors.

Casting is always very important to you, isn't it?

To any one. I think that if you cast a film right, if the actors are natural, and then there is a truth in there, and if you trust that and go with it, a good film will happen. I have also said several times that the job of the technical team is then to make the camera dance with that.

How did you get into films?

I knew from my childhood that I wanted to be in the films. Nothing fascinated me more than the movies. I studied at the Harrow Film School and then joined several television and film companies including the BBC. I started as a BBC production trainee in 1989 and became a director on The Late Show, a BBC arts program, in 1990. It took me over five years to make a film that people really noticed.

What are your earlier films?

I made several documentaries that brought me quite a bit of notice. These included The Vampire's Life, on novelist Anne Rice, which was awarded the 1996 BAFTA Huw Wheldon Award for Best Arts Program.

And that led to the drama debut?

It came with Saint-Ex, based on the life of the Little Prince by author and pioneering aviator Antoine de St Exupery. The film starred Bruno Ganz and Miranda Richardson. It was in that film that I came to admire the magic that wonderful actors bring to a screenplay  and that realisation remains with me forever. 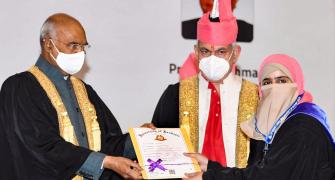