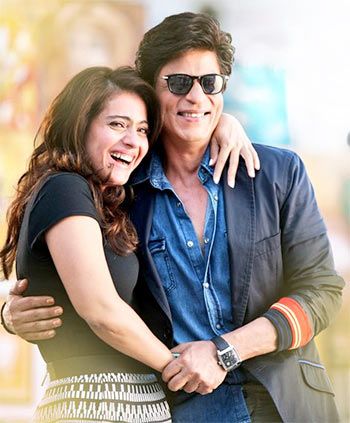 'The media and the electronic stuff has changed love. So, don't ever, ever, ever break up with your boyfriend or girlfriend on the telephone or with a message. Do it personally, please.'

'And don't ever profess love just on the telephone. Do it personally, please.'

Bollywood's Dilwale in fine form, as his co-stars listen in.

Shah Rukh Khan, Kajol, Varun Dhawan, Kriti Sanon and director Rohit Shetty have been aggressively promoting their big release Dilwale, and made sure to meet the international media as well.

For Rohit Shetty, Dilwale is his work mixed with the sentimental romance that Khan and Kajol made their own brand 20 years ago. Their jodi is back again and, if their tale seems a trifle dated, there's insurance in the second, younger couple, played by Varun and Kriti.

The group answered a variety of questions, with SRK waxing rhapsodic about the moonscapes of Iceland ("It's a place out of the world!"), the location where the romantic track Gerua was shot.

Rohit: I don't know. Are they fighting some election?

See, the best part of Ajay Devgn (alluding to Kajol) is in the film with him (Shah Rukh Khan).

Alphabetically, it's Ajay for Rohit because when Rohit began his career, Ajay was with him.

Kajol and I have joined them later. So we're junior artistes compared to Ajay and Rohit.

So the biggest name will always be Ajay and Rohit together. We've climbed based on their success. They've done 11 films together; we've done just one. There's nine to go. But don't worry, we'll catch up.

Do you think Dilwale will be as iconic as Dilwale Dulhaniya Le Jayenge was in its time?

Kajol: I think DDLJ is a phenomenon. It would be very, very difficult to repeat that phenomenon, but I really hope that, with Dilwale, we will come somewhere close to it and we will create another phenomenon -- of another kind. 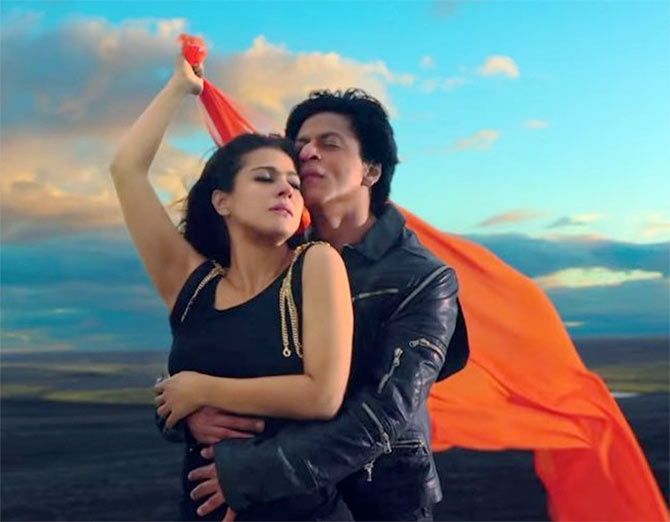 SRK: Iceland is a beautiful place.

Kajol is my friend and I don't need to praise her like this, but it takes guts to go there and shoot what she shot in that cold place. We've shot in a lot of cold places, Kajol and I. We're champions of the cold. But the cold there was too much.

You can see the locations there -- whether it's in Game of Thrones or in a Justin Bieber video, or in Interstellar... it's outstanding!

InshaAllah, Kajol and I have been presented there by Rohit Shetty in the same league -- and better -- than we have ever done in a love song. That was the whole idea. Varun and Kriti, both of you have entered the industry with a bang. Now, you're working with two of the biggest actors from Bollywood. Was there ever a moment you thought you'd get overshadowed by their chemistry?

Kriti: No. We never thought of comparing our chemistry with theirs because you really can't... Their chemistry is something we can't achieve. They are magical.

Rohit kept the film like that -- that there are two love stories going on, and they are very different. When the whole unit was shooting the film, they saw shooting of two films together.

Varun: And she's really tired, so forgive her. But it was a lot of fun romancing her and whatever chemistry you see in the film is pretty much because we do get along quite well.

Varun, in the trailer, you are seen doing the Shah Rukh Khan pose. Did you practice?

Varun: Actually, a lot of work went into that pose because we checked a lot of videos. Kriti checked and even Rohit sir checked. He (Shah Rukh Khan) has a lot of fans and you don't want to get it wrong because they may come and beat me up at home.

So we really practiced it. I still haven't perfected it obviously. But now I've got it, and I'm going to perfect the pose -- hopefully.

SRK: I have not perfected it yet. I'm also trying. Shah Rukh, because of you, Raj Malhotra is an impossible character to replicate. It's actually difficult for us to propose to a girl because of your characters. Do you think love from 20 years ago is different from what we see now?

SRK: First thing, I'm sorry you're not getting through to people because of my Raj. But don't worry, you'll get there.

I don't think love can ever be different. I think love is an expression, it's a thought, it's a belief. It just comes from inside. Whatever the language, whatever the way you do it... of course, in cinema we do exaggerate it beyond reality.

But because we have been participating in that for the last 20 years, we have created some romantic things and romantic couples.

I also realise that you don't need to do anything larger than life -- just be yourself. That's how love is.

Of course, the media and the electronic stuff has changed love -- SMSes and how you do it -- so my only thing is, don't ever, ever, ever break up with your boyfriend or girlfriend on the telephone or with a message. Do it personally, please.

And don't ever profess love just on the telephone. Do it personally, please.

That's the only thing that has changed.

Bollywood has become so popular over the world. Have you had to change anything? Do you think Bollywood's secret ingredient is emotion that gets people involved?

SRK: The emotions, the storytelling and the culture of India -- that is the USP. We should retain it. Of course, we need to dress it up like western cinema if you want to become international.

Having said that, I want to thank so many of you -- in New York, Canada, London, and everywhere -- for making sure that Bollywood is being spread all over the world.

If it wasn't for people like you, who are talking about it, holding onto it -- good, bad, in a criticizing way or in an appreciative way -- I don't think Bollywood or Indian films would have reached where they've reached in the last 10 years. So thank you very much. 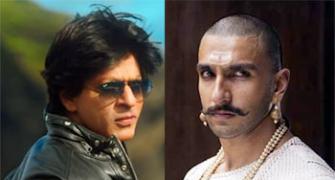 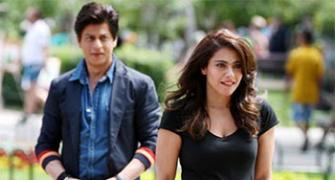 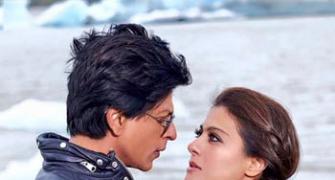 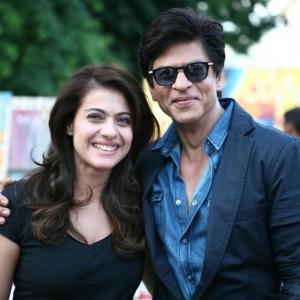 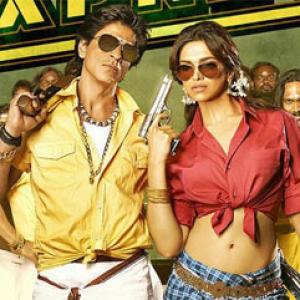