As many as 82 per cent of child workers in the national capital said that given an opportunity, they would not like to attend school, find out Prachi Salve & Aadya Sharma ' IndiaSpend 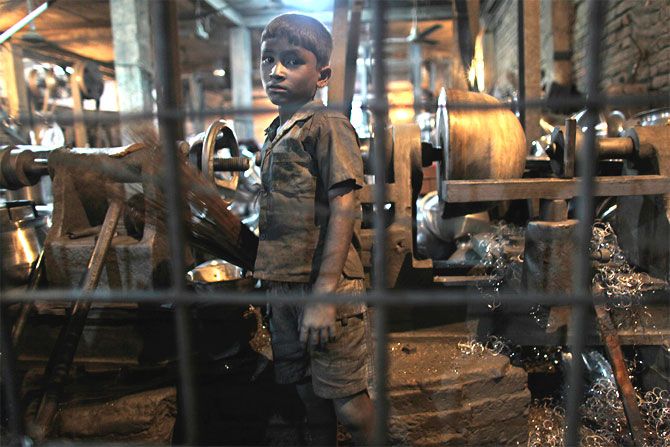 Rustam,10, works at an aluminium factory, where about 25 children are employed, many of them working for 12 hours a day. Photograph: Reuters.

These are some of the key findings of a study conducted by Save the Children, a child-rights organisation working with socially-excluded children.

As many as 92 per cent of children working in household units were enrolled in schools, but 22 per cent of them said they were not interested in education. In addas, children were either not enrolled or did not attend schools. 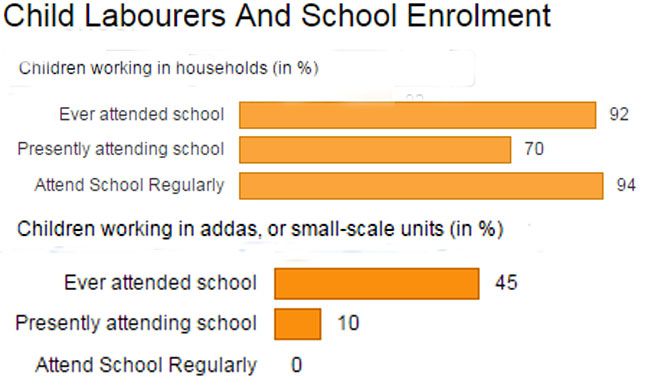 About 78 per cent of children knew about their right to free and compulsory education, and they also knew that child labour is illegal. Yet, 92 per cent of children said they were happy with their work. It is possible the children did not say what they really felt, as the study noted, or they knew little of a world they had never experienced or were happy to be earning at that age. But more than 40 per cent of respondents did not want to continue in the profession and said they would like to pursue medicine, engineering and law - if they ever got the chance.

More children work in India than anywhere else

With Kailash Satyarthi winning the Nobel peace prize for his work against child labour, there has been renewed attention on the issue in India, which has 11.7 million child workers, according to Census 2011, the most of any country.

There are 168 million child labourers between the age group of 5-17 years worldwide, which is 11 per cent of the world’s child population, according to an International Labour Organization report.

India accounts for the largest number of child labourers worldwide with 11.7 million, according to the 2011 census.

Most of the children who worked in garment units had migrated from Uttar Pradesh, Bihar, Jharkhand and West Bengal. Of 170 children surveyed, 102 were girls. More than 60 per cent worked because their families needed the money. About 59% of child labourers work in agriculture, but the issue spans sectors including manufacturing and mining. Photograph: Daniel Berehulak/Getty Images.

A childhood lost to skilled labour

Child labourers are exploited the most in addas. They work for 12-14 hours a day, and mostly live at the work place. They visit families once in six months or a year, depending upon the adda owners.

The majority of those in household units are paid less than Rs 500 per month. While their parents are paid, children sometimes are given money for their expenses. So, technically, children don’t get paid for the work they do. The risks and abuse that they do not discuss

After 35 to 40 years, the body begins to give up, adda owners told researchers, with eyes and hands not as sharp as they once were. Children complain of body ache, back pain and weak eye sight, and they are always at risk from the sharp tools, cutters, needles and machines that they work with. There is no medical assistance at household units or addas.

That does not mean abuse is low. It is likely that reporting of abuse is low, with children possibly reluctant to even admit it to the research team.