News
Business
Movies
Sports
Cricket
Get Ahead
Money Tips
Shopping
Sign in  |  Create a Rediffmail account
Rediff.com  » Business » Will not just 'Make in India' but 'Innovate in India': Dilip Shanghvi

Will not just 'Make in India' but 'Innovate in India': Dilip Shanghvi

He said Sun Pharmaceutical will continue in manufacturing , infrastructure as well in Research and Development 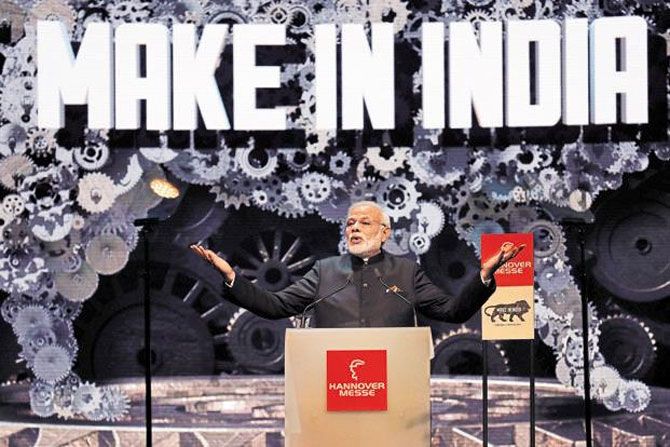 Pitching Prime Minister Narendra Modi's 'Make in India' campaign in the United States, Dilip Shanghvi, the promoter of Sun Pharmaceutical Industries, on Wednesday vowed not just to promote the campaign but will 'Innovate in India'.

"So Prime Minister sir, we promise you that as your Make in India call to Indian industrialist and global citizens. We will not only Make in India but we will innovate in India and take the products that we develop and make to the world," he said after receiving 2016 US -India Business Council (USIBC) leadership award in Washington.

On receiving the award, he said, "To receive it from our dynamic prime minister is a special feeling. He has seen us grow from a small company to what we are today and this transformation in Sun's journey to where we have reached has been possible because of our focus on solving problems for patients and making appropriate investments in technology in world class manufacturing and in research and development."

Talking about his business turn over, he said that US is the largest market for his company, adding almost 50 per cent of the turnover is in US.

He said Sun Pharmaceutical will continue in manufacturing , infrastructure as well in Research and Development.

"In last few years, both in growing our business and in acquiring business, we have invested close to $4 billion in the US and we continue to invest both in manufacturing , infrastructure as well in R&D. Out of $450 million that we will spend in R&D, $200 million we will spend in the US, " he added.

He was presented the award at the 40th annual general meeting of the US India Business Council by the visiting prime minister.

USIBC represents about 350 American companies having footprint in India.