Airtel, Vodafone-Idea and other telecom operators may have to pay the government a whopping Rs 1.42 lakh crore following the Supreme Court order last week that sent shock waves through an industry already grappling with billions of dollars in debt and an intense tariff war to retain customers. 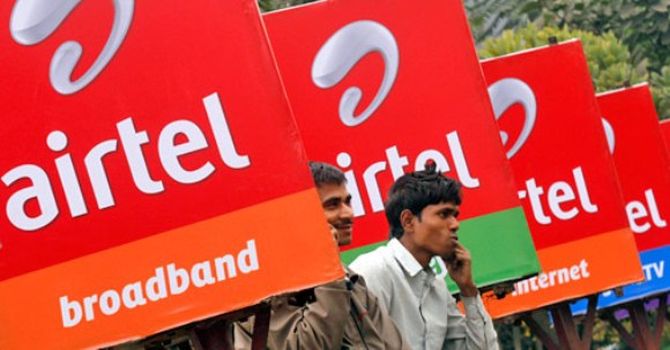 Bharti Airtel has deferred the release of its second-quarter earnings report till November 14 as it sought clarity and "support" from the government on Rs 42,000-crore statutory dues it owes to the exchequer following the Supreme Court judgment.

It was scheduled to announce earnings for July-September quarter on Tuesday but in a notice to the stock exchanges, it said the same is now being deferred till November 14.

"The company is approaching the Department of Telecommunications (DoT) to seek clarity on the total amounts involved and request for their support to deal with this adverse outcome," it said in the notice.

Airtel, Vodafone-Idea and other telecom operators may have to pay the government a whopping Rs 1.42 lakh crore following the Supreme Court order last week that sent shock waves through an industry already grappling with billions of dollars in debt and an intense tariff war to retain customers.

The top court had upheld the government's position on including revenue from non-telecommunication businesses in calculating the annual adjusted gross revenue (AGR) of telecom companies, a share of which is paid as licence and spectrum fee to the exchequer.

According to the DoT's calculations, Bharti Airtel faces a liability of around Rs 42,000 crore after including licence fees and spectrum usage charges, while Vodafone-Idea may have to pay about Rs 40,000 crore.

Jio may have to pay around Rs 14 crore.

Though the matter had been in courts for over a decade, the companies had not made any provisions for potential liability in its books of accounts and in absence of which it is now knocking on government doors for relief.

"The management of the company recommended to the board of directors that the agenda item related to the approval of audited financial results for the second quarter (Q2) and half year ended September 30, 2019, which was to be a part of the board meeting today (Tuesday) be deferred till November 14, 2019 on account of the fact that more clarity is needed on the AGR matter arising out of recent judgement of Hon'ble Supreme Court," Bharti Airtel said in the notice to the stock exchanges.

"The board of directors, in its meeting held today (Tuesday), has accepted the management's recommendation and deferred the agenda item relating to the approval of the said financial results till Thursday, November 14, 2019.

“All other agenda items shall be taken up by the Board in the meeting to be resumed today in the ordinary course," it added.

The government in 1999 offered a new package, known as 'migration package', giving an option to the licencees to migrate from fixed licence fee to revenue sharing fee with a principle of 'pay as you earn'.

This was accepted by the operators unconditionally.

Licence fee and interest till the date of migration i.e. July 31, 1999, was paid by them and no dues were waived off.

The 'revenue sharing' regime was so designed that the central government becomes a partner or sharer of 'gross revenue of the company'.

An annual licence fee is payable as a percentage of the AGR.

The licence fee initially was 15 per cent of the AGR and progressively reduced to 8 per cent in 2013 and many saw it as an extremely beneficial regime for telcos.

However, AGR calculations became a point of dispute with some in the government feeling that funds due to the exchequer were being diverted to create new businesses within and outside the country.