News
Business
Movies
Sports
Cricket
Get Ahead
Money Tips
Shopping
Sign in  |  Create a Rediffmail account
Rediff.com  » Business » Why 2020 will be a year of labour reforms 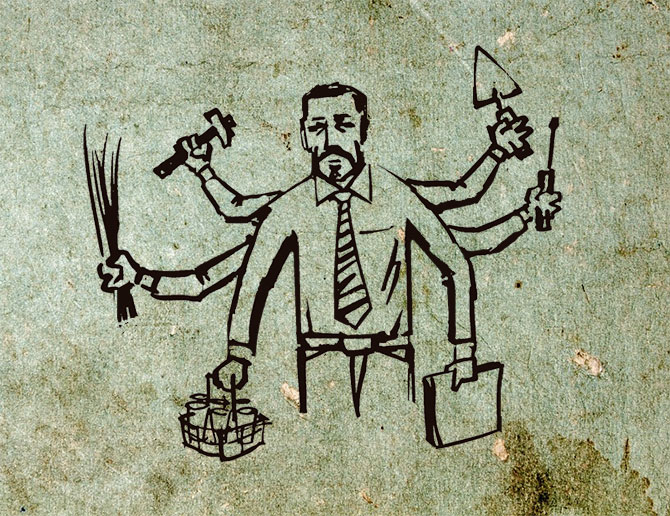 As many as 44 central labour laws are most likely to be subsumed under four labour codes in 2020, making it a year of reforms as the government works to bolster investments and tackle slowdown blues.

Besides, the Union labour ministry is mulling launching a 'Santusht' portal next month for effective implementation of labour laws at the grass-root level.

Entering 2020, the government hopes that India would be able to implement all four codes on wages, industrial relations, social security and occupational safety, health and working conditions.

These are expected to improve ease of doing business and safeguard interest of workers.

"We hope that 2020 would be an year of labour reforms.

“The codes would safeguard the interest of workers and employers. We have tried to strike a balance between workers' as well employees' rights," Labour Minister Santosh Gangwar told PTI.

The labour reforms assume significance in view of an over six-year-low gross domestic product (GDP) growth of 4.5 per cent in the second quarter of this fiscal.

The retail inflation or consumer price index (CPI) hit 40-month high at 5.54 per cent in November.

"The process of labour reforms began after 2nd National Labour Commission gave its report in 2004.

“But the process was expedited in 2014 (when NDA government came in power at the Centre).

"We introduced the four codes in Lok Sabha after many tripartite meetings (taking unions and employers on board).

“Besides we sent all four codes for scrutiny by standing committee," the minister said.

Code on wages has already been approved by Parliament.

The law would be implemented after framing rules under the code.

The remaining three codes are sent to Parliamentary Standing Committee on Labour.

"The Occupational Safety, Health and Working Conditions Code, 2019 was referred to standing committee in October this year.

“Earlier this month we also sent The Industrial Relations Code, 2019 and The Social Security Code to the committee for scrutiny to the panel," Gangwar said.

However, the unions have been raising objections against certain amendments in the labour laws through codification of central legislations.

This portal is expected to be launched next month.

There would an internal performance monitoring cell with five to six officers on it board at central level.

There have been grievances of the subscribers of the two bodies as well as other workers on poor implementation of labour laws in the country.

They faced issues like delay in settling claims by EPFO and ESIC. Some workers did not get minimum wages.

There are other issues related to poor implementation of labour laws in the country at grass root level which directly affect workers as well as employers.

The 'Santusht' portal would not only monitor the work of different bodies and wings of the ministry implementing labour laws, but also give credit and discredit to officials responsible for keeping or not keeping quality of service on the mark.

The portal would help the labour ministry to assess the performance of officials and would be given due weighage at the time of their appraisals, transfers and postings.

It would ensure transparency, accountability and effective implementation of labour laws.

The labour ministry would also enforce the retirement fund body EPFO's decision to restore commutation, or advance part-withdrawal, under the Employees' Pension Scheme from January 1, 2020.

This would provide relief to 6.3 lakh pensioners who had opted for commutation and got a lump-sum amount at the time of retirement before 2009.

The provision for commutation of pension was withdrawn by the EPFO in 2009.

Under the commutation, monthly pension used to be cut by one-third for the next 15 years and the reduced amount was given in lump sum.

After the 15 years, the pensioners were entitled to get the full pension.

Apart from the organised sector, the year 2019 witnessed significant development in the form of launch of Pradhan Mantri Shram Yogi Maan-dhan (PM-SYM).

The scheme covers informal sector workers whose monthly income is up to Rs 15,000 per month or less and belong to the entry age group of 18-40 years.

A similar scheme is also launched this year for small traders and self employers person with annual turnover (sales) not exceeding Rs 1.5 crore.

According to the scheme portal, around 40 lakh informal sector workers have enrolled under the PM-SYM.

Now, how many more come forward for the scheme would be seen in year 2020.

The government would have to put an extra efforts to increase enrolments as there are over 40 crore informal sector workers in India.