News
Business
Movies
Sports
Cricket
Get Ahead
Money Tips
Shopping
Sign in  |  Create a Rediffmail account
Rediff.com  » Business » What Modi got wrong about the economy

'There has been far too much overconfidence about the size and composition of the Indian consumer economy,' notes Mihir S Sharma.

The kindest interpretation of the current government's actions in the years leading up to this slowdown is that it genuinely believed its own propaganda.

Some have feared that its habit of concealing and denying inconvenient data while pushing forward a rosy narrative for investors and voters suggests a cynical disconnect between its analysis in private and public.

But this may be untrue.

What if the government genuinely believed that, all this time, the economy was a few quarters away from sustained high growth?

This might raise one or two questions about their judgement and the government's in-house analytical capabilities, but it would at least clear them of the charge of duplicity.

Certainly, since 2014, there has been no dearth of optimistic voices demanding that there should be less 'negativity' about the economy.

Now that most such voices have been silenced, at least for now, it is worth giving them the benefit of the doubt and asking why and how one could have been misled.

Essentially, there were three big myths that many people bought into, and which helped lead us to this situation.

The majority diagnosis then was that the UPA government was paralysed, and its lack of policy making strength and political capital had led to a frozen economy, slowing investment, and thus collapsing growth.

Thus, when a government with a parliamentary majority and enormous political capital was sworn in in 2014, a recovery from the crisis seemed assured.

But that was based on a misapprehension.

The problem in 2012-13 was not, in fact, policy paralysis linked to a particular administration, but a crisis of the Indian State machinery that spilled over into the private sector.

Regulation was not strong enough to create both growth and transparency; poor dispute settlement mechanisms meant that capital was too gravely at risk; and suspicion about even mundane administrative actions that affected private sector returns meant that excessive caution had crept in.

Some such changes have indeed been made -- the Insolvency and Bankruptcy Code was among them.

But, overall, the basic building blocks of the crisis were not addressed.

What we are in now is not a product of that past crisis -- it is the very same crisis.

It was just put on the back burner, thanks to a sharp turn in the commodity price cycle, which provided a positive shock to the supply side and to government prices, between 2014 and 2016, and subsequently a recovery from an additional crisis forced on the economy by demonetisation and the botched Goods and Services Tax implementation in 2016-2017.

Now that these latter two impulses have run their course, we are back in 2013.

The notion that big-ticket public investment is sufficient for growth.

This arises from several misapprehensions, including a misreading of the China model.

The fact is that better infrastructure matters only if the private sector finds it profitable to use it.

Thus public funding of such infrastructure only pays off if the private sector also finds itself willing and able to co-invest in the new projects that will feed off the additional infrastructure.

In China, which is a State-directed economy, the private sector could easily be pushed into doing so.

In India, this is less possible -- and doubly so when the private sector finds itself short of funds anyway.

Thus, while one might welcome the partial use of the commodity price bonanza on an infrastructure build-out from the State, the fact remains that without addressing constraints on the private sector -- overcapacity, a debt overhang, tax terrorism, and stifling regulation -- such infra spending would not have a 'crowding in' effect.

Thus the marginal product of this investment capital from the State was probably extremely low.

There is no point building highways if nobody wants to buy trucks to run on them, or if there isn&'t enough growth in the amount of goods being transported.

We had several years in which demand appeared to be solidly supporting growth.

But this was a product of populist policy that (temporarily) supported income growth, household credit expansion, and positive supply side shocks thanks to a structural reduction in food and fuel inflation.

None of these three factors are sustainable.

Sustainable demand growth without an increase in either overall productivity or factor utilisation is difficult to envisage.

The unspoken hope was that demand would keep climbing till capacity utilisation in the private sector passed some (unknown) threshold, at which the investment engine was to start up again.

But it seems even if that was possible, the demand push has broken down short of such a point.

The private sector is certainly credit-constrained, but nor is it feeling the need to borrow in order to finance investment projects that have suddenly become attractive.

The problem here is that there has been far too much overconfidence about the size and composition of the Indian consumer economy.

An economy at our level of development cannot depend merely on domestic demand to pull investment and growth up.

The only true interpretation of China's growth miracle -- and that of the rest of East Asia before it -- is that it emerged from coupling domestic supply responses to global, instead of domestic, demand.

In other words, India has to be a trading nation.

Perhaps the government is right to want to protect aspects of domestic industry from the effects of trade.

But, if so, its project from day one should have been to make the case that Indian develop­ment requires access to world markets alongside some reasonable and temporary protections for its infant industries.

Unfortunately, it instead has fallen in love with the notion of Indian industry servicing domestic demand, and the rest of the world be damned.

Naturally, this means that overcapacity will continue to plague the Indian private sector, given the impossibility of isolated and sustained demand growth.

Thus, if one is to have an optimistic view of the medium term, it will depend on whether these essential sources of negativity are removed.

Structural reform of administration and factor markets is necessary in order to move on from the crisis that began in 2012-2013; the quality of government spending must increase, alongside co-operation with the private sector, in order to ensure that government capital spending raises productivity and growth; and chronic overcapacity and a shortage of remunerative investment project must be alleviated by a 180-degree shift in our trade policy.

If not, it is clear there is ample reason to continue to be negative. 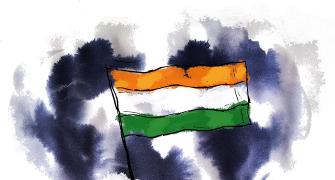