News
Business
Movies
Sports
Cricket
Get Ahead
Money Tips
Shopping
Sign in  |  Create a Rediffmail account
Rediff.com  » Business » Who were the real heroes of the 1991 reforms? 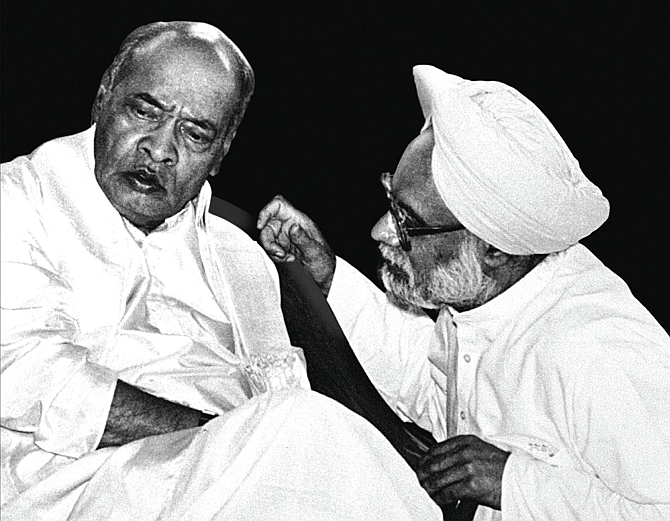 'One wishes that today's 'take no prisoners' brand of politics would give way to an understanding of the national interest that is shared by both government and Opposition,' says T N Ninan.

A number of people who had roles, large and small, to play in the 1991 reforms have been interviewed, written newspaper articles and even books.

In a replay of the Rashomon sequence, each of the men from Hindustan looks at the elephant from his particular angle, ignoring or not fully aware of what else was cooking. The sub-text of what has come out reminds one of the old saying, that success has many fathers.

There are interesting disclosures in Vinay Sitapati's excellent book on Narasimha Rao (Half-Lion), in which he spells out how Rao was very careful to not push himself in front of the klieg lights, partly as a matter of strategy and partly out of wiliness -- to deflect criticism on to others if the whole thing failed.

Privately, Rao was pushing Manmohan Singh to get more ambitious about his first Budget. Sitapati recounts that, in Rao's own assessment, his biggest achievement was the wholesale re-writing of industrial policy.

In a newspaper article, Yashwant Sinha has reiterated a widely-held view, that he would have presented a Singh-style Budget if the Congress had not pulled the rug from under the Chandrashekhar government.

Deepak Nayyar, chief economic advisor in the critical period, has written a detailed account -- managing to do so without mentioning Dr Singh. And Rakesh Mohan has spelt out the spadework that went into the industrial policy.

Meanwhile, N K Singh, now a member of the Bharatiya Janata Party, suggests that credit should go to the Opposition for not opposing reforms, and arguing that serious tax and other reform was done after Manmohan Singh ceased to be finance minister.

In turn, Arun Jaitley has said the Congress should not take credit for the 1991 reforms because the party's senior leaders had opposed many of the proposed steps.

Sitapati's book is complemented by the then backroom facilitator Jairam Ramesh's account of the period (To the Brink and Back), while at least two more books on reforms are in the works, one by Montek Singh Ahluwalia. Unfortunately, the unsung Amarnath Verma is not around to recount his pivotal role as principal secretary to the prime minister.

Still, what is evident is that the reforms of 1991 involved many players, and there was more than one centre of action.

The firefighting in the finance ministry had focused on dealing with the foreign exchange crisis, while various proposals on industrial policy had been doing the rounds independently.

It was the Rao-Manmohan Singh duo which used the external liquidity crisis as an opportunity to introduce more sweeping structural reform than previously contemplated -- pushing the envelope on industrial and trade policy, disinvestment, freeing interest rates, allowing private mutual funds, opening up to foreign investment, and tackling subsidies.

Sometimes this was in the face of opposition from key officials. They followed this up with financial sector reform and sweeping changes to the capital market.

Unfortunately, Manmohan Singh refuses to put pen to paper and tell the story from his unique vantage point. What we know from Sitapati's book is the skill with which Rao dealt with the task of political management, and not just within the Congress party -- among other things, he invited Sinha to join the Congress!

A telling anecdote relates to how Dr Singh had got upset at the barrage of criticism being fired at him from the Opposition benches. Rao then had a word with Atal Bihari Vajpayee.

At a meeting that followed, Vajpayee told Dr Singh that it was the duty of the Opposition to oppose and criticise, but he should disregard that and go ahead with what he was doing.

One wishes that today's 'take no prisoners' brand of politics would give way to an understanding of the national interest that is shared by both government and Opposition. 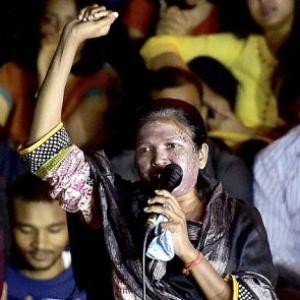 Why Soni Sori plans to hoist the Tiranga in Maoist heartland