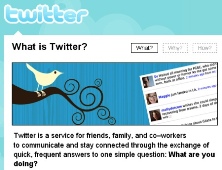 Most of us think that all that a Tweeter account can do is connect with friends a study has found out that netizens could predict market sentiments with 90 per cent accuracy by simply analysing their feeds.

Researchers at Indiana University Bloomington's School of Informatics and Computing have found that there is a correlation between the value of the Dow Jones Industrial Average and public sentiment after analysing more than 9.8 million tweets from 2.7 million users during 10 months in 2008.

The IU scientists said that analysis of the collective public mood derived from millions of tweets can predict the rise and fall of the DJIA up to a week in advance with a 90 per cent accuracy.

The study was carried out by Associate Professor Johan Bollen and Ph D candidate Huina Mao, who analysed the text content of the large-scale collection of Twitter feeds to measure variations in public mood.

With the help of two mood-tracking tools -- OpinionFinder and Google-Profile of Mood States -- the scientists analysed the Twitter feeds and then compared them to closing stock market values.

OpinionFinder, analysed the tweets daily at a particular time to provide a positive or negative feedback about the public mood, while, GPOMS measured the mood of tweets in six dimensions:

"What we found was an accuracy of 87.6 per cent in predicting the daily up and down changes in the closing values of the Dow Jones Industrial Average," Bollen said.

"In fact, the calmness index appears to be a good predictor of whether the Dow Jones Industrial Average goes up or down between two and six days later," Bollen said.

Earlier, studies had linked the performance of Indian cricket team with the country's stock market Sensex.

According to a study by Monash University the 'poor' performance of India, in one day matches can significantly impact on fortunes of the Indian stock market.

Moreover, when Sachin Tendulker plays in the losing side, the loss in the stock market could be 20 per cent more.