Samsung to unveil its next Galaxy SIV smartphone on Apple's turf

Samsung Electronics Co Ltd said it will launch its new Galaxy S smartphone on March 14 in New York, taking its fight for market supremacy to Apple Inc's doorstep after reportedly being inundated with requests from US mobile carriers. 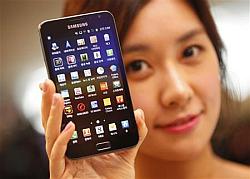 The Galaxy S IV model will heat up competition in the crucial US mobile phone market, where Apple surpassed Samsung Electronics as the top mobile phone seller for the first time in the fourth quarter of 2012.

It will be the first US launch of Samsung's flagship Galaxy smartphone in three years, company spokeswoman Chenny Kim said, and comes amid a Samsung advertising blitz in the United States that has including light-hearted jabs at Apple's fans.

"We introduced the Galaxy S III in London last year, and this time we changed the venue (to New York)... as we were bombarded with requests from US mobile carriers to unveil the Galaxy S IV in the country," Samsung Electronics' mobile division chief JK Shin was quoted as saying on the Edaily news website.

The new Galaxy S model is expected to feature a higher-resolution display and camera than its predecessor, as well as a faster quad-core processor,

Samsung Electronics unveiled its first Galaxy S during the CTIA mobile trade show in the United States in 2010, followed by the Galaxy S II at the MWC fair in Spain in 2011 and the Galaxy S III in London last year.

Samsung Electronics may have lost its lead in the US handset market but globally the $210 billion South Korean giant is expected to widen its smartphone advantage over its Cupertino, California-based rival this year, helped by a broad product line-up.

Apple investors have grown anxious about the company's prospects amid intense competition from Samsung's cheaper, Android-powered phones, and signs the premium smartphone market may be close to saturation in developed markets.

Apple shares have slumped 15 percent this year and the company is reportedly slashing orders for screens and other components from its Asian supplier as intensifying competition erodes demand for its latest iPhone.

Samsung Electronics stock price has inched up 1.5 percent so far this year.