"The company is aggressively eyeing the general entertainment space in the Bengali and Telugu markets and the deals should materialise this year," Sony Entertainment Television CEO Kunal Dasgupta told Business Standard.

Though there are five Bengali channels -- ETV Bangla, Tara Music, Zee Bangla, Aakash Bangla and DD Bangla -- on air, experts feel that the market is not growing at a good pace.

However, Bengal is one of the few markets where ETV Bangla commands a larger viewership than Star Plus. Outside the South, the Bengal market is one of the richest regional markets.

Currently, 30-40 per cent of the revenue for Telugu channels comes from the local advertisers.

But does the company have the money to bankroll these acquisitions? Rubbishing market speculation that Sony Entertainment Television was cash-strapped, Dasgupta said the company would not have chalked out an acquisition strategy if its coffers were empty.

However, media and entertainment experts feel this may not be enough to help Sony Entertainment Television beat arch rival Star TV.

Though the company has managed periodic highs in viewership with programmes like the Indian Idol, its flagship channel, Sony, had a market share of only 4.36 per cent during October-December 2005. This is around one-fourth of Star Plus' 17.07 per cent.

Also, Dasgupta needs to seriously worry about Star Plus's younger sibling, Star One, which is slowly and steadily growing in ratings as well as in mind space.

But Dasgupta has some plans up his sleeve. "This year will see us actively acquiring blockbuster formats. Hopefully, we will hit the jackpot that will change the pecking order of the entertainment channels dramatically," he said.

Sony Entertainment Television will aggressively pitch for the BCCI cricket rights, which will come up for bidding next month. Also on the cards is an English movie channel.

Besides, Dasgupta plans to hop on to the DTH bandwagon this year and introduce the humour-centric channel, Sab TV, to overseas markets.

Sony Entertainment Television is also holding talks with telecom players such as Reliance Infocomm and Bharati to establish its presence on the mobile platform. 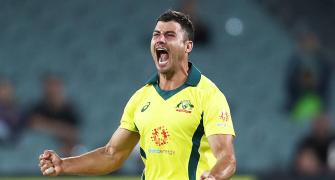