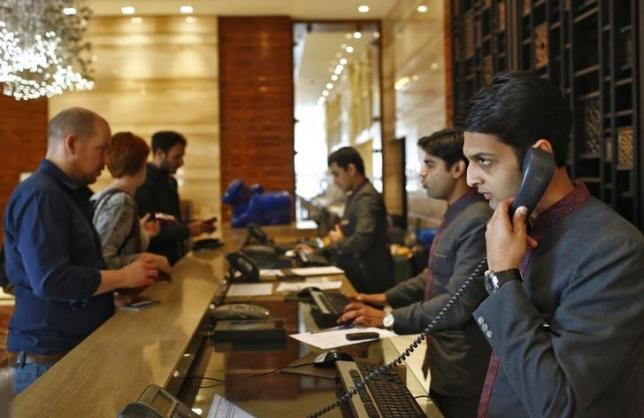 Receptionists attend to guests at their counter inside the Crown Plaza hotel, run by the InterContinental Hotels Group (IHG), in New Delhi. Photograph: Anindito Mukherjee/Reuters

The weak showing contrasted with a similar survey on Monday which showed robust manufacturing growth in May, and underscored the view of the central bank that Asia's third-largest economy is not doing as well as the latest rosy GDP numbers suggest.

The HSBC Services Purchasing Managers' Index, compiled by Markit, fell below the 50 level that separates growth from contraction, coming in at a 13-month low of 49.6 in May from April's 52.4.

"Restrained demand accompanied by sweltering heat and the earthquake led to falling new work. Nonetheless, the sector is expected to see a rebound in coming months, as these factors fade away," said Pollyanna De Lima, economist at Markit.

Firms increased prices at their fastest pace since April 2014 as input costs jumped, which alongside an ongoing heat wave curbed consumer spending.

To try and spur business activity and boost demand, the central bank cut interest rates by another 25 basis points on Tuesday, the third reduction this year.

Analysts in a Reuters poll in late May expected further easing between October and December but a lot depends on the monsoon. Poor rains could fuel inflation and halt further policy easing.

The government is pushing for long-promised economic reforms and opening the door to more foreign investment to try and propel growth.

India's economy grew 7.5 per cent in the three months through March, outperforming China's.

But many economists say a new way used to calculate gross domestic product may overstate how fast India is really growing.

© Copyright 2020 Reuters Limited. All rights reserved. Republication or redistribution of Reuters content, including by framing or similar means, is expressly prohibited without the prior written consent of Reuters. Reuters shall not be liable for any errors or delays in the content, or for any actions taken in reliance thereon.
Related News: InterContinental Hotels Group, Reuters, Pollyanna De Lima, India, HSBC
SHARE THIS STORY
Print this article