'Govt will ensure Satyam employees do not suffer' 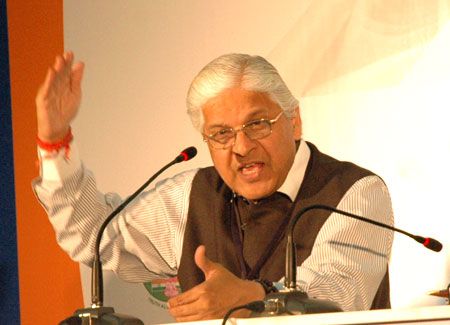 Dr Ashwani Kumar, Union minister of state for commerce and industry, said on Thursday that the government will ensure that the Satyam employees do not suffer as result of the fraud committed by the management.

He was replying to a question at a press conference held during the Pravasi Bharatiya Divas celebrations in Chennai.

He also said that we should not paint the entire private sector companies as villains because of one bad firm. He said that the government will take steps to restore investor confidence, but did not elaborate on the issue.

Kumar said that the government plans to provide a major boost to a flagging economic by investing Rs 1 lakh crore (Rs 1 trillion) in various 'infrastructure projects that will begin in the next 100 days'.

He said that the government's aim was to pump-prime the economy and infusion of these massive funds into the core sector will especially benefit companies in the cement, steel, metals, sanitary-ware, plastics and allied sectors.

The infrastructure sector encompasses as many as 42 different industries that employ over 3.2 crore (32 million) people. Kumar said that government's focus was to create more blue collar jobs so as to benefit a larger section of the population.

Kumar also said that work on the Rs 4-lakh-crore (Rs 4 trillion) Mumbai-Delhi Industrial Corridor being set up with Japanese assistance will 'begin immediately' and 'will be completed in the financial year 2012-13'.

In a move that will also provide a boost to the automobile sector and create jobs, the government plans to buy 40,000 buses and lorries. Kumar said that these vehicles will be bought by various state governments, but almost 90 per cent of the cost will be borne by the central government in the form of grants.

Turning to the financial sector, the minister said that banks and other financial institutions will be encouraged to lend to industries at affordable rates of interest. Interest rates, he said, have been brought down from 16 per cent to around 11 per cent.

Stating that the government's strategy to control runaway prices is bearing fruit as inflation has been brought down from 12 per cent to just above 6 per cent, Kumar exuded confidence that with the prices of petrol and diesel likely to be reduced further in the coming weeks, inflation will fall further to 5.5 per cent levels.

The minister claimed that the impending Lok Sabha elections will be fought on a three-pronged plank of terror, internal security and economy.

Justifying the government's heavy expenditure into the economy to kick-start it, Kumar said that this was a crisis of unprecedented magnitude and thus more importance has been given to pump-priming the economy than to control the rising fiscal deficit. The government, he assured, will deal with that later.

On the terror issue, Kumar said that getting Pakistan to admit that Kasab was a Pakistani was a big victory for Indian diplomacy. He said that internal and national security would never be compromised and the government will take all steps to ensure security. He side-stepped a question on whether war was still an option.

On the issue of Rahul Gandhi becoming the nation's prime minister, the minister said that Rahul was 'ready for any responsibility' entrusted to him.

A Ganesh Nadar in Chennai
SHARE THIS STORY
Print this article