Additionally, promoter Naresh Goyal and Etihad Airways, which owns a 24 per cent stake in the airline, will infuse around Rs 2,000 crore into the airline, sources aware of the development said. 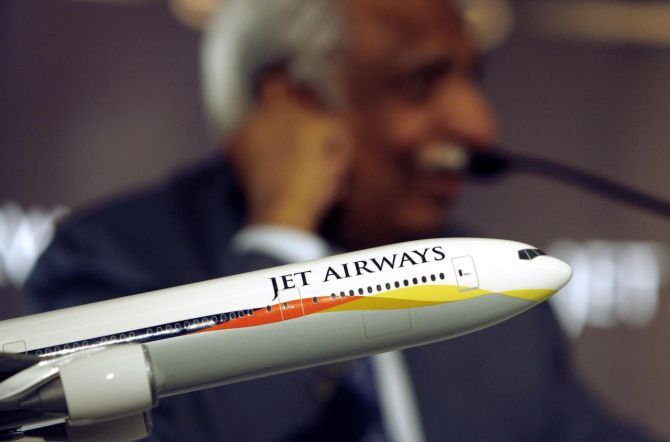 Cash-starved Jet Airways and its lenders led by State Bank of India are gearing up for a three-part resolution plan, which could take at least two months to fructify, sources in the know said.

Raising about Rs 2,500 crore through a rights issue is a key step for Jet in the proposed deal, even as its lenders are looking at a debt-to-equity conversion.

While lenders may convert Rs 1,000 crore of debt into equity, they will also participate in the equity infusion through a rights issue as part of the deal.

Additionally, promoter Naresh Goyal and Etihad Airways, which owns a 24 per cent stake in the airline, will infuse around Rs 2,000 crore into the airline, sources aware of the development said.

Lenders are expected to participate in a rights issue to raise capital. Also, government-owned infrastructure fund National Infrastructure Investment Fund (NIIF) is likely to buy a 19 per cent stake for Rs 1,500 crore. Along with the NIIF, banks will own a 51 per cent stake in the company.

The NIIF was approached by lenders after Etihad Airways refused to increase its stake beyond 25 per cent without an exemption from open offer.

The Securities and Exchange Board of India is learnt to have expressed its reservation over such an exemption.

NIIF Chief Executive Officer Sujoy Bose did not respond to multiple queries about the matter.

Sources said Etihad Airways would infuse around Rs 1,450 crore to maintain its stake at around 24 per cent, promoter Naresh Goyal would bring in Rs 550 crore to hold 21 to 22 per cent.

Goyal has already infused Rs 250 crore into the airline.

“At the first stage of the resolution plan, lenders have agreed to convert around Rs 1,000 crore of debt into equity. In the second stage, there will be a rights issue of around Rs 2,500 crore in which banks will participate. This process is subject to approval from the promoter, lenders and Etihad Airways. It may take around two months to close,” said an official of a State-owned lender. The third part of the plan would result in sale of some assets.

Another source said the SBI-led consortium would release around Rs 550 crore in the next 15 days to bridge the immediate funding gap. He said: “The draft resolution plan has been approved by the Jet board and needs approval of the boards of banks and Etihad. Besides, the approval of various regulatory authorities is also required.

“This would take a few months. There is an interim funding requirement of Rs 500-1,000 crore. Banks will make an assessment and lend the fund against security”.

The airline has a funding gap of Rs 8,500 crore. “There will be equity infusion, sale or sale and leaseback, debt-to-equity conversion, and refinancing of aircraft. A combination of all these will help the company reduce the debt. But, I will be unable to give you the numbers right now,” said Amit Agarwal, chief financial officer at Jet Airways, on Friday.

On Thursday, the company’s board approved a draft resolution plan, which comprises conversion of debt into 110.4 million shares. Jet had a gross debt of Rs 7,654 crore as of December-end, comprising aircraft loans worth Rs 1,700 crore. About 60 per cent of the loans are dollar denominated.

Jet has called an extraordinary general meeting next week to secure shareholders’ nod for the issue of 110.4 million shares to lenders.

But converting debt into equity hasn’t worked before

Among the recent big accounts where the lenders converted debt into equity include Jaypee Power Ventures, IVRCL, KSK Mahanadi, Lanco and Kingfisher Airlines.

Indian lenders are taking a significant risk in converting part of Jet Airways’ debt into equity because in about 20 similar cases before banks had been unsuccessful in making money.

Many power projects where the debt was converted into equity are awaiting a sale.

Among the recent big accounts where the lenders converted debt into equity include Jaypee Power Ventures, IVRCL, KSK Mahanadi, Lanco and Kingfisher Airlines.

“While Kingfisher’s debt was converted into equity at a premium to the then market price of the airline, in the case of Jet the debt is converted into equity at the rate of Rs 1 as the airline’s book value per share is negative. It remains to be seen whether the banks would make money on their exposure,” said a bank official. On Friday, the Jet stock closed at Rs 232 a share.

Lenders said they were throwing a lifeline to Jet for strategic reasons because it connected different parts of India. “The airline has good assets in terms of landing slots all over the world. Once the airline finds its feet, the banks will be able to exit at a good price,” said the chief executive of a bank.

“A portion of the outstanding amount of debt (including unpaid interest) worth Rs 3,058 crore was converted into 305.80 crore equity shares of Rs 10 each at a price determined in accordance with the RBI circular,” the company in January as lenders took 51 per cent in the company. JPVL traded at Rs 1.56 a share on Friday on BSE.

Similarly, lenders had converted their loans to infrastructure construction firm IVRCL at a price of Rs 8.7 a share with a face value of Rs 2 in February 2016. The loans were converted under the RBI’s strategic debt restructuring scheme. After conversion, the lenders held 51 per cent in the company.

As of today, IVRCL’s shares are trading at Re 1 a share. This was after the company was referred to the National Company Law Tribunal (NCLT). With this, the banks are sitting on dud shares and did not get upside to their conversion.

In July 2016, lenders took control of Lanco Infratech by converting part of their Rs 41,000 crore loan to the company into equity and taking 60 per cent in the company. This was after management consultancy firm EY came up with a valuation of Rs 5,300 crore for the company.

Lanco was referred to the NCLT under the IBC 2016 and to date banks have failed to recover any money from the Hyderabad-based company. The case is still pending at the NCLT.