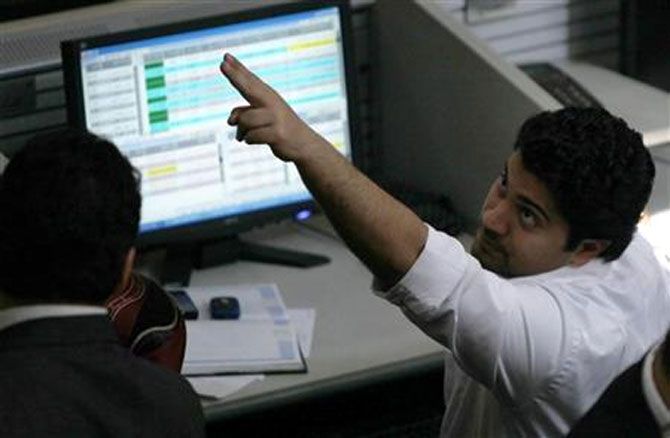 Benchmark share indices pared intra-day losses to end higher on Tuesday amid a rebound in late trades led by Infosys and bank shares.

The broader markets also ended in sync with the larger peers with BSE Midcap and Smallcap indices up by 0.76% and 0.34%, respectively.

The market breadth, however, ended negative with 1,343 declines against 1,284 advances on the BSE.

On the currency front, the rupee weakened 9 paise and was quoting at 64.22 on the back of fresh capital outflows and strengthening of dollar

According to Ranak Merchant, Technical Analyst - Strategies of Sushil Financial Services, “The mayhem continued on D-street with the indicated supports of 8050 being broken as indices slipped below their respective pychological supports.

Nifty breached the 8000 mark on more than one count and even closed below the same. A smart recovery in yesteday's session failed to amuse traders for long as selling pressure emerged yet again as indices inched closer to 8,050.

The fall of last few sessions appears to have made a base near 7,939 levels while resistance continus to be near 8,050." Further she adds,

“For any technical bounce to emerge from short term oversold zone a close above 8,050 is imperative with targets near 8200 (200 Day EMA).

Events that would determine the next course of markets would include Fed meet of June 17th (tomorrow), developments on Greece and advancement of monsoons. Traders are adivsed to initiate longs in call options near 7939 and add to positions upon breakout above 8,050 levels."

Trade deficit for the month of May contracted to $10.4 billion as against $11 billion in April largely due to falling gold imports.

However, the total trade deficit expanded to $21.39 billion during the months of April-May as against $21.32 billion year-on-year.

Merchandise exports in May contracted 20.19%, reaching $22.34 billion compared with $28 billion a year ago in the same month and the imports in May reached $32.75 billion, down 16.52 per cent compared with $39.23 billion year-on-year. Meanwhile, the global markets edged lower amid concerns over Greece debt default.

Further, investors would be closely watching the Federal Open Market Committee (FOMC) meeting, which will be held for two days starting today and tomorrow. Investors are expected to get clarity on US Fed rate hike.

Sectors like Banks, Auto, Consumer Durables and Power ended higher between 0.7-1%. Apart from FMCG and Oil & Gas, all the sectoral indices ended in positive zone. Index heavyweight HDFC finished 1% lower on the Sensex.

The housing finance major has reported an increase of 12% in its advance tax payment at Rs 465 crore for the first instalment of current fiscal. Reports suggest that the government will infuse fresh capital in the government-run banks this year to bolster risk buffers and credit growth.

SBI, PNB, Canara Bank, Bank of India ended higher by up to 2% with IndusInd Bank leading the rally up over 2.5% on reports that the bank is focusing on the real estate business, after a span of almost six years.

The Foreign Investment Promotion Board (FIPB) has deferred for the second time Kotak Mahindra Bank's proposal for raising foreign investment limit in the bank to 55% from the existing more than 48%.

The oil giant is, however, cautious of this operation as earlier they had to shut down their retail outlets. The stock finished with marginal gains at 0.3 %.

A broad based sell-off is evident among the metal stocks across the bourses as Chinese demand failed to pick up yet despite stimulus measures by the biggest consumer.

Vedanta, Jindal Steel ended down between 1-2%. Tata Steel ended session on a downward trend, yet again amid talks in order to resolve the on-going pension dispute with the UK trade unions.

The stock finished 1% down. Shares of Vedanta and Cairn India dragged 2% and 3%, respectively on the Sensex after Ingovern, a proxy advisory firm raised question marks over the merger between the debt-free Cairn India and debt-ridden Vedanta.

Tata Power shares gained 2.5% on reports that the company is in talks with lenders’ consortium to refinance loans extended to 4,000-MW Mundra ultra mega power project (UMPP) in Gujarat.

Meanwhile, the Delhi Electricity Regulatory Commission (DERC) approved a power tariff hike of 4-6% for the region as it restored a surcharge to compensate the private electricity distribution companies for rise in power purchase cost. Although the monsoons have delayed but a good rainfall has so far been recorded over southern peninsula, central India and east and northeast India this summer with over 13% above the normal limit, according to the weather department.

The Mahindra Group has clinched a multi-million dollar aerospace contract with European consortium Airbus at the Paris Air Show, marking a major milestone in the Make-in-India initiative.

M&M advanced nearly 1% on the Sensex. Shares of oil marketing companies (OMCs) gained after these companies announced Rs 0.64 a litre increase in petrol prices and Rs 1.35 per litre cut in diesel prices to align the domestic rates with global price benchmarks. HPCL, IOC and BPCL were up 1-2%.