Rebutting the concerns looming over Greece, benchmark indices wrapped up the trading session on a firm note following expiry of June derivative contracts.

The rally was led by capital goods, financials and auto shares.

The broader markets ended in sync with their larger peers with the BSE Mid-cap and Small-cap indices finishing up by 0.68% and 0.23 % respectively.

The market breadth was neutral with 1,329 advances and 1,320 declines on the BSE.

Further, the Employees’ Provident Fund Organisation in a bid to provide a boost to the local equities announced that it would start investing about $800 million in the equity markets, starting July 2015.

On the currency front, the Indian rupee has marginally depreciated against the greenback to 63.61 levels against its previous close at 63.59 levels.

Meanwhile, foreign portfolio investors were net buyers to the tune of Rs 92.57 crores on Wednesday, as per stock exchange provisional data. 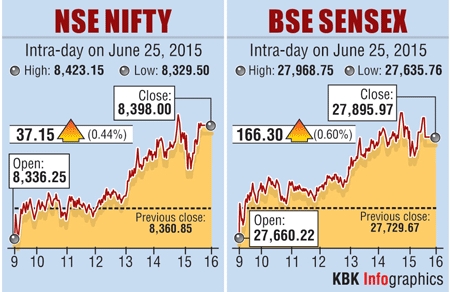 Concerns surrounding the exit of Greece from the Euro zone has loomed back when its creditors yesterday rejected a proposal by Greece to avert a debt crisis.

The international creditors of Greece have asked Athens to come up with a new proposal on Thursday, which would be credible and acceptable.

However, the Reserve Bank of India Governor Raghuram Rajan has maintained his trust in the Indian markets and believes the financial markets would resist the Greece debt crisis.

Sectorally, BSE Capital Goods index rallied over 2%, followed by BSE Bankex and Auto indices, ended up by nearly 1%. Selling pressure was witnessed in the Information Technology sector, which shed nearly 1%.

According to media reports, Bajaj Auto is set to launch two new motorcycles by FY17. The stock ended as the top gainer, having jumped 4.5% on the Sensex.

Vedanta finished over 2% after the company along with Cairn India initiated the merger process by filing the scheme of arrangement along with the relevant documents with the stock exchanges. Cairn India finished with 3% gains

From the capital goods pack, L&T finished higher over 3.5% gains while BHEL wrapped up with nearly 1% gains The PSU engineering major on Tuesday said that it has commissioned a 250-MW unit of NTPC's Bongaigaon thermal power plant in the Kokrajhar district in Assam.

Financials have also witnessed some buying with SBI, and HDFC twins gained between 1-2% on the Sensex while ICICI Bank and Axis Bank closed lower between 0.1- 0.5% each

From the pharma pack, Dr. Reddy’s and Lupin registered 1.55% and 1.45% respectively on the Sensex while Sun Pharma and Cipla dropped 0.5% and 1.7% respectively.

From the IT space, Infosys closed lower by 0.7% on the Sensex.

Reports suggest that it could soon become the most influential stock on the Nifty, Sensex and MSCI Index after SEBI said that existing promoters may be reclassified as public if a company becomes professionally managed and does not have any identifiable promoter.

TCS lost around 0.6% while Wipro dipped more than 2% on the Sensex.

Among other notable gainers, Reliance Inds finished with 1.4% gains while Gail logged over 3% on the Sensex.

Hindalco, Bharti Airtel, and Hero Motocorp gained between 0.6-1.2% each on the Sensex.

On the flip side, Tata Steel, NTPC, Hindustan Unilever and ONGC have lost between 0.3-1.2% on the Sensex. 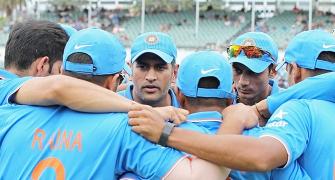 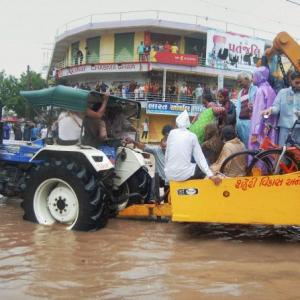 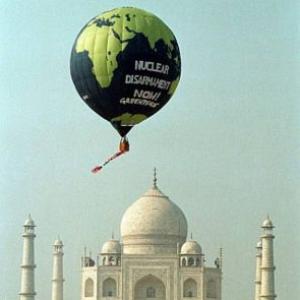