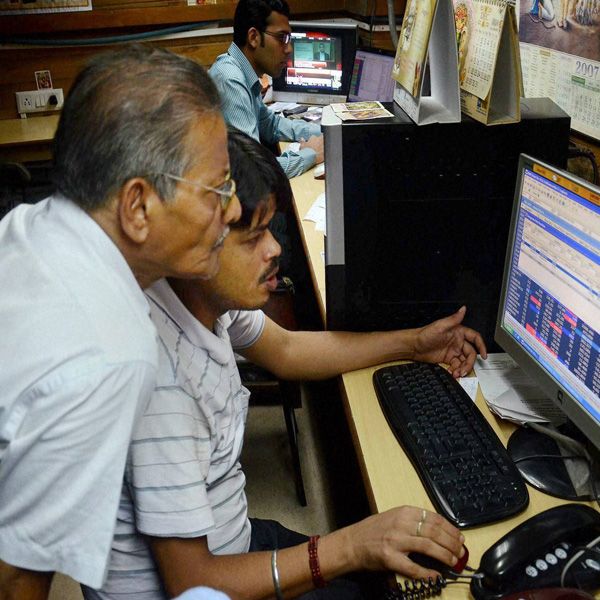 Markets finished the session on a lower note with Indices snapping the six day winning streak after investors booked profits at higher and attractive levels.

"Trading holiday in US on Monday, and in India on Wednesday, also seems to have clipped the momentum, while the US jobs data and FOMC minutes scheduled for release later in the week ensured that buyers were less inclined to chase prices higher.

"The expansion of cabinet evoked no major positivity, while data showing June service sector PMI falling to 7 month low gave additional reasons for investors to skim profits from the recent rally, especially ahead of the Q2 earnings season."

Shares in mainland China bucked the weak trend in Asia after the latest data showed acceleration growth in China's services sector in June 2016.

The Shanghai Composite index ended 0.6% higher. In Hong Kong, the Hang Seng was currently down 1.43%.

Readings above 50 indicate an expansion on a monthly basis, while readings below signal contraction.

Back home, growth in India's services firms fell to a seven-month low of 50.3 in June as compared to the previous month of May as new business grew at its slowest pace in the previous 11 months, a business survey showed on Tuesday.

In the political front, PM Narendra Modi inducted 19 new ministers into the Council of Ministers. Government sources said the move will strengthen the Modi-led team with “experience, expertise and energy”.

The rupee lost some ground as it weakened by 8 paise to 67.35 against the dollar at the forex market today following fresh demand for the American unit from importers and banks amid a lower opening in domestic equities.

Among key stocks, Bharti Airtel, GAIL, Tata Motors, Asian Paints and Hero MotoCorp were the top losers in the Sensex pack, down 1%-2%.

The telecom industry is expected to spend Rs 100,000 crore towards spectrum acquisition in upcoming auctions, which will translate into a payment of Rs 37,000 crore upfront. Telecom shares like Bharti Airtel, Idea and MTNL slipped between 0.2%-2%.

The Supreme Court yesterday reportedly reserved its order on the petition seeking modification in the apex court order banning registration of diesel vehicles of 2000 cc and above in the NCR.

Ashok Leyland dipped 6%, extending its Monday 2% decline on the BSE, after the company reported single digit growth in total sales for the second straight month. 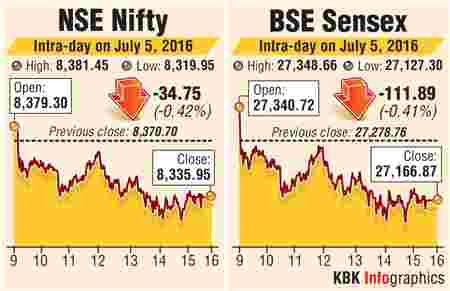 According to media reports, CCEA may clear Axis Bank proposal to raise FDI cap to 74%. Adani Ports and Special Economic Zone gained around 0.5% after the company raised Rs 252 crore through issuance of non-convertible debentures on a private placement basis.

Reliance Industries (RIL) has got approval from the Ministry of Environment & Forests to drill eight additional exploratory wells in Tamil Nadu.

Shares of RIL rose 1%. UltraTech Cement slipped 1% after rallying around 10% in an intra-day trade after the company announced that its board has approved the acquisition of the Jaypee Group’s cement plants at an enterprise value of Rs 16,189 crore.

Shares of fertilisers companies dipped up to 14% on the BSE in intra-day trade after the government announced reduction in prices of key fertilizers.

Techno Electric & Engineering Company surged 4% on the BSE, after the company announced that the board will meet on July 14 to consider issue of bonus shares.