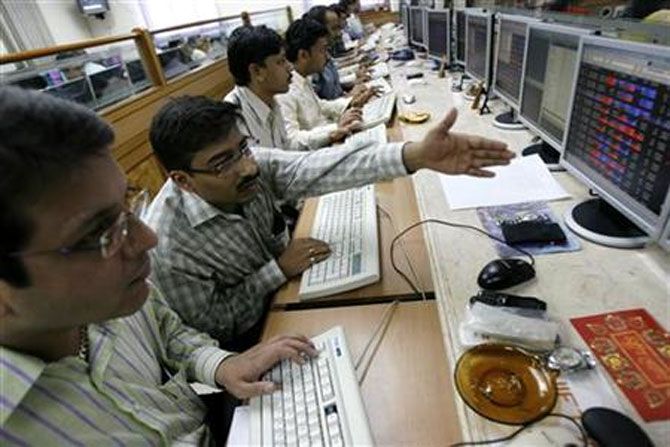 Benchmark share indices rose for the second straight day with state-owned banks gaining the most led by State Bank of India after it reported lower-than-expected rise in bad loans.

"Today’s movement was a combination good global cues supported by short covering. Additionally, better-than-expected results from SBI added to the buoyant market mood. Markets will consolidate and then move up over the next several weeks and the bias is clearly positive. Therefore any dips should be considered as opportunities to buy in to the market," Jayant Manglik, President, Retail Distribution, Religare Securities.

Foreign institutional investors were net buyers in equities worth Rs 608 crore on Thursday, as per provisional stock exchange data.

The merger news between Grasim and Aditya Birla Nuvo was the highlight of today's trade along with earnings from state-owned banks such as State Bank of India and Bank of India.

Yes Bank ended 3% higher amid reports that the private lender's weightage on the MSCI Global Standard Indices will be raised to 1.7% from 0.46%.

Hindalco ended 2.5% higher after the metal major reported a higher-than-expected net profit at Rs 294 crore in the June quarter even as net sales declined on year-on-year basis mainly because of sharp fall in expenses.

Among other shares, shares of Mafatlal Group companies such as Mafatlal Industries, Navin Fluorine International and Nocil have rallied up to 13% on the BSE on the back of heavy volumes.

Rane Engine Valve surged 9% after the company announced the sale of part of its land in Alandur, Chennai at a market value of Rs 94.82 crore.