Gains were led by IT exporters amid a weakening rupee while bank shares reversed early losses. Markets ended higher on Monday after opinon polls in Britain over the weekend, ahead of the referendum on Thursday, increased the possibility that Britain would continue to remain in the European Union.

Earlier, markets witnessed a knee-jerk reaction after RBI Governor Raghuram Rajan's decision to move back to academia after finishing his term at the Reserve Bank of India in September too everyone by surprise.

In the broader markets, the BSE Midcap and Smallcap indices are up 0.4% each.

Market breadth is strong with 1384 gainers and 1201 losers on the BSE.

Earlier, markets witnessed a knee-jerk reaction after RBI Governor Raghuram Rajan's decision not to continue after September 3 took everyone by surprise.

"Markets have taken the exit of RBI governor Raghuram Rajan's in its stride expecting more policy measures from the new governor for growth rather than inflation in addition to more flexible policies for banks in terms of asset quality norms.

The Indian rupee which had fallen sharply in early trades after Reserve Bank of India Governor Raghuram Rajan's decided not to seek a second term has trimmed losses and is trading 29 paise lower at 67.37.

Foreign institutional investors were net buyers in equities worth Rs 32 crore on Friday, as per provisional stock exchange data.

"As long as the government chooses someone who has credibility in the eyes of domestic & foreign institutional investors to conduct an independent monetary policy; frayed nerves among a section of investors & commentators will be calmed.

"It is neither Rexit or Brexit but RainExit that should be worrying investors more as nearly 60% of Indians still depend on agriculture & allied activities and with two successive monsoon failures the need for a normal monsoon to kick-start rural demand cannot be under underestimated," says Ajay Bodke, CEO & Chief Portfolio Manager - PMS, Prabhudas Lilladher.

Asian shares were also trading higher with Japanese stocks gaining the most.

European shares were trading higher after worries over Britain exiting the European Union eased slightly with bank shares leading the gains. The FTSE-100, DAX and CAC-40 were up 2.6%-3.2% each.

IT exporters firmed up on the back of a weakening rupee. Infosys ended up 2.9% while TCS gained nearly 2%.

HCL Technologies ended up 2% after the company announced that it has signed a strategic IT partnership contract with LeasePlan, a global fleet management and driver mobility company of Dutch origin.

Banking stocks have recouped early losses and have turned positive. SBI ended up 1% while HDFC Bank and ICICI Bank ended with marginal gains. 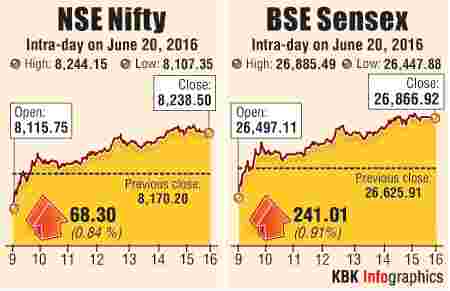 Auto stocks were also among the top gainers with Tata Motors up 4.2%.

Oil stocks were also among the top gainers with Reliance Industries and ONGC gaining 1.6% each.

Among other shares, Eros International Media ended up 2.5% after the company said it has entered into a television syndication deal for their new and catalogue films with Zee Network.

Max Financial Services ended higher by 6% after the company and Max Life on Friday entered into an agreement for a merger with HDFC Life.