A high power committee comprising heads of various probe agencies and specialised departments has been constituted to monitor the investigation and steps taken to bring back black money stashed in foreign banks, Government told the Supreme Court on Monday. 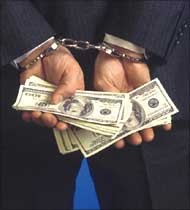 Government said the multi-disciplinary committee for the investigations and other steps likely to be taken, can co-opt members not below the rank of joint secretary for effective implementation of the work in consultation with the secretaries in Home, Foreign and Defence ministries.

The secretary in the Cabinet Secretariat can also be co-opted as a member. The government stand was in response to proposal of a bench comprising justices B Sudershan Reddy and S S Nijjar which had favoured setting up of an independent special investigating team (SIT) headed by a retired judge to monitor the case.

Solicitor General Gopal Subramanium told the bench that the co-ordinated mechanism has been put in place to deal with all such cases of black money and it would be headed by the Revenue Secretary.

He further said that various aspects of the black money case can be probed by different agencies and it would not be limited to the present case of Pune stud farm owner Hasan Ali Khan who has come under the scanner of ED and income tax department.

"As far as security angle of the case is concerned, it would be probed by the CBI which would also deal with Hasan Ali Khan case. Money laundering to be investigated by the ED while RBI should be asked to look into the black money stashed in UBS and other Swiss bank," Subramanium said.

The government also submitted that it is investigating into 36 cases involving black money and informed the court that it has entered into agreement with 26 countries under which it could attached the black money stashed in their banks by Indian citizens.

The government's submission came after it was pulled up in the last hearing on April 21 for restricting its probe to an individual and being evasive about the idea of an investigation by the Special Investigating Team.

The bench had asked the government to explain why its investigation was focused only on Hasan Ali Khan and no other names have come out who have stashed money in overseas banks.

"Your whole focus is centred on one individual. Does it mean that all the black money parked in foreign banks belong to only one person? Is it that black money issue is surrounding around one person? Do you have information beyond that?" the bench said.

"We put it very simply and bluntly. Do you have any information regarding other persons also? It seems there is only one person (Indian) who has bank account in Switzerland and no other persons' account has come under suspect in Swiss bank," the bench told the government.

The court was hearing a petition filed by noted lawyer Ram Jethmalani and some former bureaucrats seeking the court's direction to the government to bring black money stashed by Indian nationals in foreign banks, which is said to be to the tune of one trillion US dollars.

Besides Jethmalani, five others, including former Punjab DGP K P S Gill and former Secretary General of Lok Sabha Subhash Kashyap who are petitioners, have alleged the government was not taking action to bring back the black money.

Earlier, the government had opposed the idea of setting up an SIT comprising members of various agencies to probe the case saying the ED has been conducting the investigation properly, which is reflected in the status report filed before the bench.

The court, however, had said that in view of the gravity of the case, more than one agency is required to conduct the investigation as the ED itself had expressed "helplessness" on numerous occasion while probing the case.

"We are very clear in our mind that more than one agency is required to conduct the investigation and it should be monitored by a person of eminence which could be a retired Chief Justice of High Court," the court had said.