Criticising various provisions in the proposed GST regime, Moily said it will be a "technological nightmare" and the anti-profiteering provisions in it are "far too draconian." 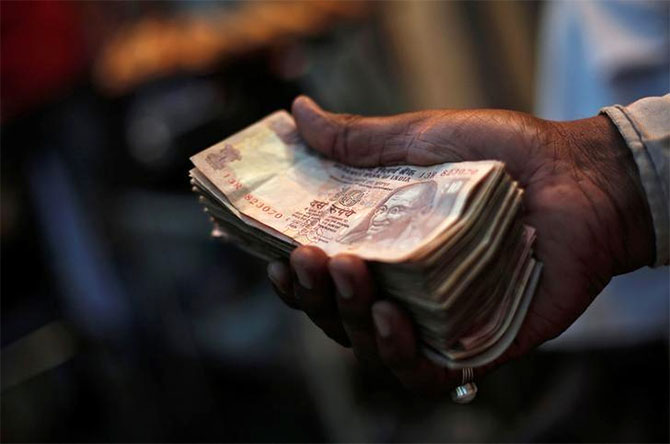 India lost a whopping Rs 12 lakh crore due to years of delay in implementation of the GST due to the stiff opposition by the BJP when the UPA government was in power, the Opposition said on Wednesday.

Initiating a discussion on the four GST bills in the Lok Sabha, Congress leader Veerappa Moily said what the NDA government has brought about in the name of a "revolutionary tax reform is not a game changer but only a baby step".

Criticising various provisions in the proposed GST regime, Moily said it will be a "technological nightmare" and the anti-profiteering provisions in it are "far too draconian."

"Seven to eight years have passed after the erstwhile UPA government wanted to bring the GST bill. Some parties then felt it should be halted due to reasons best known to them," he said.

The former law minister said due to the delay caused in the roll out of GST, the country lost around Rs 1.5 lakh crore annually and put the total loss at Rs 12 lakh crore.

Asking who will compensate for this "huge loss", Moily said the country was deprived of massive financial benefits due to the "damaging political gambles". 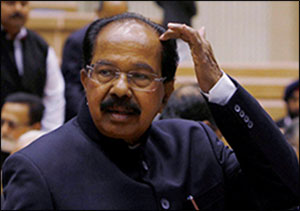 Moily, left, also slammed the Narendra Modi government for "high as well as too many taxes under the proposed GST system which he said does not reflect the original spirit behind the new tax regime."

"The one nation, one tax concept is only a myth. There are too many rates, cesses... What you brought today cannot be called a game changer but only a baby step," said Moily.

Referring to the "complexities" in the inter-state transactions proposed under the GST, he called some of the provisions as "retrograde".

The Congress leader also took strong exception to leaving the real estate sector out of the ambit of the GST.

“The real estate sector generates lot of black money. It is very unfortunate that the sector was not brought under the ambit of GST," said Moily.

Earlier, Finance Minister Arun Jaitley introduced four bills in the Lok Sabha to give effect to the Goods and Services Tax (GST).

Jaitley said the legislations will have to be passed by Parliament and one by each of the state assemblies to turn India into one market with a single tax rate.

Moily said there will be a turf war between the tax administrations of central and state governments after the implementation of the GST.

The senior Congress leader said the GST will enhance only administrative complexity in the tax system and there will be "complete anarchy" in taxation.

"Intention may be good but this will land the country in complete tax distortion," he said.

Moily said there was no clarity how the tax benefits will be availed by the common people.

He said the GST legislation was an example of how the government is pursuing a "chalta hai" (casual) attitude as there was not enough provision to protect the common people.

Participating in the debate, BJP member Udit Raj said the GST would bring about uniformity in the tax system and be immensely beneficial to the 1.2 billion people of the country.

Raj, a former revenue officer, said the GST Bill has been brought to end the different tax slabs prevalent in different states besides abolishing the cascading effects of the current tax structure.

Under the GST, there will be same tax structure across the country, all anomalies will come to an end and extend the tax base, he claimed.

The BJP MP dismissed the suggestion that with the implementation of GST, the powers of the state legislatures to enact tax laws will be completely abrogated, saying the legislation was prepared only with the consent of all state governments.

He said the Centre will not dictate the GST Council but will act as buffer between the central and state governments.

Raj said GST implementation will automatically encourage digitisation, bring in transparency and lower the prices and the hoarding of essential commodities, besides curbing blackmoney.

“The GST is a game changer.. It will lead to a corruption-free India," he said.

All India Anna Dravida Munnetra Kazhagam member Venkatesh Babu, bottom, left, termed the GST as the biggest tax reform initiative post independence but said there were many challenges in its proper implementation. 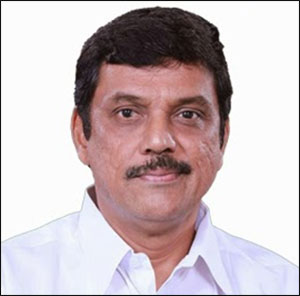 He said Tamil Nadu, being one of the manufacturing states, had initially opposed the GST Bill but it was happy that some of the concerns of the state were addressed.

"There will be huge revenue loss to manufacturing states like Tamil Nadu. Some of our concerns were addressed while some are yet to be addressed," he said.

Babu said through the GST Council, the central government will get 'veto power' and sought proper representation and powers to all states in it.

He also said that there will be an increase in the prices of some goods like fertiliser, which is now sold at a tax slab of 17 per cent (12 per cent excise duty and 5 per cent VAT), but the tax in fertiliser will go upto 25 per cent post GST implementation.

The AIADMK MP, however said, "the Tamil Nadu government is fully committed for successful implementation of GST". 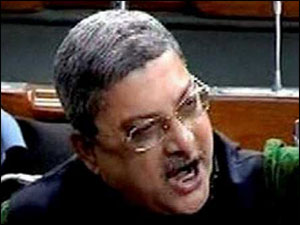 Banerjee, left, said it was West Bengal which always fought for cooperative federalism and fiscal autonomy and the rights of common people and small traders.

He said the GST will bring a single tax structure for the common people and small traders and it was West Bengal which ensured that no state government suffers financially due to the implementation of GST.

The purpose of GST is to end multiplicity of taxes and its cascading effects and all benefits should be passed on to the common people, he said.

Banerjee also suggested that the government should look into the GST models of other nations so that the legislation is implemented properly. Otherwise, the initiative may fail.

Banerjee asked the government not to rush with the GST bills and have a re-look at its defects.

"You have time...Still there are lacuna and errors and necessary amendments should be brought," he said, adding no one should take credit for this law. "Humne kiya hai nahin, sabne kiya hai, ye baat bolna hoga (don't say we have done this. Everybody has done this)," he said.

Raising concerns, Bhartruhari Mahtab, bottom, left, (Biju Janata Dal) said that everybody was saying that the GST law will be a game-changer but "we (BJD) believe that it will be illusionary to expect too much from it". 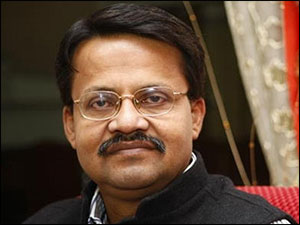 There is a view that this law will make a common market, there will be no entry tax at borders, invoicing will be simpler and lot of other benefits, but "I will remind again that do not expect too much from the GST".

"Claims that consumers will benefit is also illusionary," he said, adding everybody is asking whether the prices will come down or not.

He raised the issue of entry tax in Orissa and urged the finance minister to take up this case on the state's behalf.

The other concern is about requirement of multiple registration of service providers as it will increase the compliance cost. "This is not in the spirit of ease of doing business."

Citing the definition of agriculture in the GST Bill, he said "You are bringing agriculturists to the tax net. Agriculture is being taxed. Can we deny it?"

He said four states were against this but their suggestions were not accepted by the GST Council.

"Share cropping is now going to be taxed by this bill. Widening the tax net is one thing" and bringing some people into it is different and it is highly objectionable, he added.

He also pointed out that items like dairy farming and poultry has not been included in the definition of agriculture and these may also be taxed. So, this provision needs to be addressed. "Are you going to bring them under GST and widen the tax net," he asked.

Anandrao (Shiv Sena) welcomed and supported the bill, but said that high tax will increase the burden of consumers and this needs to be looked into. He also asked the reason of not bringing consumable alcohol under the GST ambit.

Supporting the bill, Jayadev Galla (TDP) pointed out that the GST will benefit the consuming states, but add to the agony of other states, including Andhra Pradesh. "We are going to lose Rs 2,000 crore. Andhra Pradesh is losing because there is a reduction in duty," he said.

The Centre must look at the pathetic fiscal condition of Andhra Pradesh after its bifurcation of the state and compensate it accordingly. He also sought clearing of all the CST dues of the states.

He also said that under taxation, there should not be any discrimination regarding chit fund companies and added that the GST would bring smile to some sectors but agony to some others. 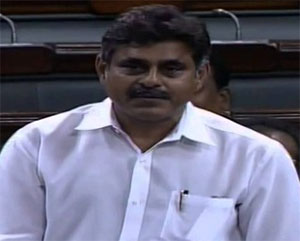 He said as the GST Bill is ushering in a new era, it is sweet. The tax compliant hospitals and builders may have a competitive disadvantage which "can be kadwa (bitter)."

He also raised concern over the anti-profiteering clause. "It is simply inserted and it gives way for harassment and it could be potentially kadwa and this goes against the prime minister's maximum governance, minimum government".

Reddy said the bill has only four tax slabs and asked "so will it fit all the commodities? Absolutely not."

On compensation to the states, he said not all states were growing at 14 per cent, but a state like Telengana is growing at 16 per cent.

Attacking the GST Bill, Mohammed Salim (CPI-M) said "are we replacing Parliament" with the GST Council.

He also pointed out that the government was claiming to bring far reaching changes "but are we not outsourcing the law- making process? Are we making the GST Council a clone of Parliament," he asked.

Salim also said that in the name of widening the tax net, the government wants to bring agriculture in that net.

Poonam Mahajan (BJP) said the government is bringing back the economy on smooth track and GST will boost growth.

He said cooperative societies should be exempted from the purview of GST as otherwise poor people will suffer losses.

Chandumajra expressed concern over levy of GST on lease of land, saying it would increase the cost for farmers.

Sirajuddin Ajmal (All India United Democratic Front) said GST would reduce complexities of taxation but the government should take requisite measures before the new tax regime is implemented as otherwise it would impact common man.

He also demanded a mechanism to reduce harassment to taxpayers.

Saugata Roy (TMC) said the GST will undermine the federalism of the country.

"The law gives the GST Council an arbitrary and discretionary powers," Premchandran said.

Roy said no political party is opposed to GST, but the "government is in a hurry" to bring in the legislation even when some basic questions related to it remain unanswered.

The Opposition members also sought to know how the Centre would compensate the states, with Roy asking where will the funds to reimburse the money come from?

Murli Mohan (Telugu Desam Party) said Andhra Pradesh will see a revenue decline of Rs 23,000 crore (Rs 230 billion) over the next five years after implementation of the GST.

He said revenue earnings of his state had dried up after bifurcation of Andhra Pradesh in 2014 and wondered how the Centre would compensate it.

Others who supported the bill include Santosh Kumar (JDU) and Sushil Kumar Singh (BJP).