Indira Gandhi International Airport has been named the world's second best airport in the 25-40 million passengers category by the Airport Council International.

The airport also has been adjudged as the fourth best in the world among 199 airports across all categories. 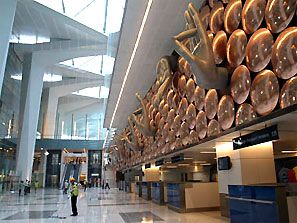 "This recognition is testimony to the efforts of all our employees and partners who have consistently met the expectations of the industry," DIAL CEO I Prabhakar Rao said.

IGI airport scored 4.83 out of 5 on the Airport Service Quality (ASQ)

IGI has managed to retain its position of second best airport in the 25-40 million passengers per annum category for 2012 year.

The airport had an ASQ score of 3.02 in 2007 and ranked last among the 101 participating airports of the world.

IGI handled around 550,000 tonnes of cargo and over 300,000 aircraft movements during the same period.

Since its inception in 2006, the ASQ Awards have become the world's leading airport passenger satisfaction benchmark with over 275 airports participating in it.

The ASQ Awards recognise and reward the best airports in the world based on ACI's ASQ passenger satisfaction survey done on uniform format worldwide and represent an opportunity to celebrate the commitment of airports worldwide to continually improve passenger experience.
Source: PTI© Copyright 2022 PTI. All rights reserved. Republication or redistribution of PTI content, including by framing or similar means, is expressly prohibited without the prior written consent.
Related News: DIAL, ASQ, Air India, Central Industrial Security Force, Airport Council International
Print this article