India needs to hardsell itself as a preferred tourism destination in overseas markets, besides promoting domestic tourism. We expect the Union Budget 2010-11 to be positive for the hotel industry. 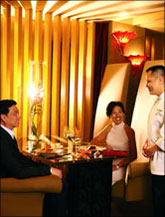 The Indian hotels sector was adversely affected by the global economic crisis and the terrorist attack in Mumbai on November 26, 2008. The sector has witnessed a crash in average room rents, occupancy rates and Rev PAR.

The players in the sector reported a fall in profits in the last quarter, despite this quarter generally being the peak season for the hotel business.

The foreign tourist arrivals and foreign exchange earnings fell on a y-o-y basis in the first four months of the current financial year.

The former fell by 12 per cent to 18.32 lakh (1.83 million), while the latter fell by 9 per cent to Rs 17,643 crore (Rs 176.43 billion) during the above period. But once the normalcy in business conditions resume, the foreign tourist arrivals can reach 10 million while domestic tourists (demand) will soar to 500 million in the medium term.

As this materialises, there will be shortage of 150,000 rooms in India, considering the current capacity of 120,000 rooms. That means the demand is going to exceed the current supply by 100 per cent over next 3-4 years.

For adding 150,000 rooms, the industry needs an investment of Rs 50,000 crore (Rs 500 billion) and the additional inventory would lead to a huge opportunity of employment.

Considering the huge employment potential, and also due to the need to scale up supplies to meet the demand, the hotel sector expects the following fiscal benefits/incentives to be bestowed in the ensuing Union Budget 2010-11.

Federation of Hotels and Restaurant Association of India

(a) Do not equate the hotel sector with real estate

The Reserve Bank of India has equated the hotel sector with real estate in the circular dated June 29, 2005. Due to a higher risk perception, the interest rates are typically increased by 3 per cent to 4 per cent per annum. The hotel industry should be granted infrastructure status under Income Tax Act as well as in RBI definition.

In order to remain competitive with other destinations in Asia like Malaysia, Indonesia, etc, which has a low level of taxation, hotels in India need to be subjected to a rational tax structure

In the list of infrastructure projects, hotels may be included just like airports, seaports, and railways, etc.

In fact under Section 10 (23) g of the Income Tax Act, hotels were added to the infrastructure list so that the interest received by financial institutions and banks for loans extended to hotels were tax exempted. However, the section itself was discontinued with effective from April 1, 2007.

All new hotel projects will be able to avail the benefit of deductions of 100 per cent with respect to profits and gains for a period of 10 years. This will lead to many new hotel projects being set up, with companies re-investing their profits in the hotel sector.

Further, it will help in channelling huge investment about Rs 50,000 crore (Rs 500 billion) in the tourism sector in next 3-4 years and quickly bridge the shortfall of hotel accommodation.

Section 80 HHD gives tax exemption from the export profits to exporters. If this is granted to the hotel industry, it would help companies to reinvest profits for building additional capacity.

As per Section 80-IC of the Income Tax Act, any undertaking commencing any operation specified in the Schedule XIV and having undertaken substantial expansion during the period from January 7, 2003, to April 1, 2012, to promote eco tourism in the special category states (like Sikkim, Assam, Tripura, Meghalaya, Mizoram, Nagaland, Manipur, Arunachal Pradesh, Uttranchal and Himachal Pradesh) are exempt from income tax for five years, for promoting eco tourism in the country.

But the income tax authorities have denied deductions to hoteliers on the ground that the activity of a hotel does not constitute an operation as specified in Schedule XIV of the Income Tax Act and they have also directed the hoteliers to explain the eco tourism activity in their project.

The hotel sector seeks a liberal view to include hotels as an eligible activity of eco tourism in Schedule XIV, to enable them to claim the above benefit.

Deduction to be made in computing total income under Sec 80

While calculating the total income of an individual deduction of LTC paid to an employee be admissible, as in the case of other deductions via PF, Mutual Funds, LIC, etc. This will promote domestic tourism all over India and increase revenues for the government.

In the Income Tax Act 2007-08, Section 80 ID was introduced to give encouragement to 1, 2, 3 and 4 star hotels and convention centres of a minimum seating capacity of 3,000 persons being set up in the National Capital Region of Delhi, Gurgaon, Faridabad, etc, for the Commonwealth Games in 2010.

A tax holiday for five years was granted to these hotels that would open before March 31, 2010.

The areas covered under this section were further expanded in the Budget proposal 2008 to several other locations. Presently, the benefit is extended to new hotels set up in the specified region and the benefits are not allowed to substantial expansions of hotels and resorts in these regions.

Substantial expansions of room capacity in excess of 30 per cent of the existing capacity should also be treated eligible for the tax holiday benefits. The coverage of the benefits granted under this section should be extended to all categories of hotels throughout the country, and those which open in the next 10 years.

Hotel buildings are considered as plants for the hotel industry as they are utilised for 24 hours. The industry is required to make heavy investments in renovation, upgradation and upkeep of the hotel buildings at all times to keep it in pristine condition.

Section 32 of the IT Act should be amended to restore the depreciation rate to 20 per cent.

Hotels and other tourism related service providers who earn foreign exchange have been included as the 13th sector in the Service Export Promotion Council set up by the ministry of commerce, government of India.

The customs duty structure should be rationalised for hotels and restaurants in tune with the international practices, to enable the Indian service sector to compete with their international counterparts.

This is specially so for import duty payable by small sized hotels and restaurants who do not earn substantial foreign exchange and therefore, are not eligible for any of the Export Promotion Capital Goods schemes.

Seeks excise duty exemption on supply of food preparations (as part of their food and beverage services) by hotels or restaurants to their by guest (staying in the relevant hotel).

Also, hotels and restaurants with turnover less than Rs 1.50 crore (Rs 15 million) should be exemption from paying central excise duty on the products produced and consumed within the premises.

The 2 per cent interest subvention extended to employment-intensive sectors like textiles, leather, marine and handicrafts as announced in the relief package announced by the government of India on December 8, 2008, should be definitely extended to the hotel sector as their employment generation capacity is much more than these sectors.

Many states in India have already granted industry status to tourism and the industry seeks the remaining state governments as well as the central government to recognise tourism as an industry.

It is also requested to declare tourism as an industry under the Schedule 1 of the Industries Development Act, 1951.

Luxury tax varies widely across services and states. Also, in the most of sales it is charged on the published tariff by not considering the commissions paid to agents and discount offered to walk-in clients.

So the industry seeks exemption of luxury tax on the room tariff less than Rs 2,500 and to charge a uniform rate of 4 per cent on the actual tariff where room rent is Rs 2,500 or more per day.

(f) VAT/Sales tax and other taxes

Vat/Sales tax on food & beverage are different for each state and it should be uniform over the country. It will help in many hotel projects coming up all over the country which leads to lowering hotel tariffs and generating employment.

Associated Chambers of Commerce and Industry of India

Assocham has suggested the extension of the tax holiday scheme for five years to all categories of hotels, including 5 star hotels, especially in Delhi and the NCR region to speed up the addition of hotel rooms which are needed for the Commonwealth Games of 2010.

Assocham also suggested the removal of service tax on the hotel industry, since these are required to pay services tax on services received outside the territory of India, especially commission paid to foreign travel agents.

The global economic crisis and terrorist attack in Mumbai has affected the hotel industry significantly. As a result, even in the peak season (ie November-April), almost all the players posted sharp fall in revenues and profits.

Foreign tourist arrival to India has sharply declined after the terrorist attack and started recovering with key initiatives taken by the ministry of tourism. In this condition, it is expected Union Budget 2010-11 to take some important decision like granting the hotel industry 'infrastructure status.'

The grant would help the industry players eligible for loans from the financial institutions at a lower rate of interest, thus resulting in a healthy performance which could be used to narrow the mismatch between demand and supply over the next 3-4 years.

The luxury tax rate should be reduced at least 5 per cent from the current levels of 5-15 per cent, depending on the state governments.

India needs to hardsell itself as a preferred tourism destination in overseas markets, besides promoting domestic tourism. We expect the Union Budget 2010-11 to be positive for the hotel industry.

Court to hear CBI plea for Raju custody on Mar 6