Experts say, investors will be better off exiting them at higher levels and investing in stocks of fundamentally sound companies.

Analysts have turned cautious on small-caps after a sharp market rally saw a host of these stocks beat their mid- and large-cap peers on absolute return.

The S&P BSE SmallCap index has outperformed the market in the past three weeks, surging 14.4 per cent as compared to an around 12.5 per cent and 13 per cent rise in the S&P BSE Sensex and the S&P BSE MidCap indices, respectively.

Of these, four stocks - Khadim India, IFCI, Sintex Industries and Srei Infrastructure Finance - have surged over 70 per cent, while 29 stocks soared 50 per cent to 70 per cent.

“A number of these stocks have gone up on account of the ample liquidity chasing them - even those with weak fundamentals.

"Investors are speculating and chasing higher return at a time when other avenues of generating a decent return are drying up.

"While some can still go up further, investors will be better off exiting them at higher levels and investing in stocks of fundamentally sound companies,” says A K Prabhakar, head of research at IDBI Capital.

With this gain, the S&P BSE SmallCap index has recovered 37.5 per cent from its 52-week low touched on March 24.

In comparison, the S&P BSE Sensex and the S&P BSE MidCap indices have bounced back 32.4 per cent and 31.4 per cent, respectively, from their 52-week lows hit on the same date.

“Small-caps will take a much longer time to recover as far as earnings are concerned compared to their mid-cap and large-cap peers.

"Some may even find it difficult to pay the principal and the interest on their borrowings and may fold up.

The Centre is slowly moving towards restoring normalcy. While relaxations in curbs would help improve the supply-side situation, the underlying demand trend remains the key monitorable.

It believes the interplay of health and economic crisis holds the key to how markets behave in the near term. 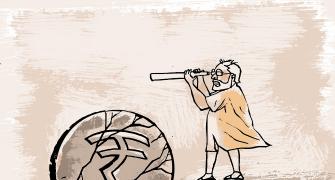