News
Business
Movies
Sports
Cricket
Get Ahead
Money Tips
Shopping
Sign in  |  Create a Rediffmail account
Rediff.com  » Business » 'This Budget is like a meal you get in a Udupi hotel'

'One thing is sure: After this Budget, no Ambani-Adani tag will be attached to the government.' Would you call this Budget populist, pro-poor, or one that is aimed at the forthcoming assembly elections?

It is very difficult to define the Budget in one or two adjectives.

If I say there is an element of populism embedded in it, it doesn't mean the entire Budget has that character.

We have to look at the Budget from the context.

If the Universal Income Benefit scheme mentioned in the Economic Survey had been brought in, I would have called it a populist Budget and that it's a political Budget with an eye on the Uttar Pradesh elections.

Though it is not there, we can't say that nothing is there for the poor in the Budget.

Having said that, I do not want to give one or two adjectives to the Budget.

I would say that this is not a bold or a dramatic Budget.

It is not a populist or a reckless Budget.

This Budget is like the meal you get in a Udupi hotel where you are served everything.

There are so many dishes on the plate that you will not come out not satisfied.

The Budget has forgotten that infrastructure, primary education, health, water and irrigation are the means of addressing poverty.
What we see is not a healthy sign.

You mean, there is something for everybody in the Budget?

Yes. But I would say there is nothing path-breaking in it except the one which is very significant and dwarfs all other issues.

It is the significant step it has taken; that political parties cannot take more than Rs 2,000 from one source in a year in cash as donation.

This may be one small step, but this is a giant step forward.

It lays hands on the Gangotri of corruption, which is political funding.

More than baby steps have been taken for State funding of elections through the RBI electoral bonds.

This has taken into account that electoral funding and political party funding by corporates have to come down dramatically.

The next step will be reducing the Rs 2,000 further.

But where the Budget fails in addressing is irrigation.

The Budget or the central government does not appear to be serious about this issue.

Especially when you have drought everywhere...

Yes. If you draw an arc from Rajasthan, North Gujarat, Marathwada, Vidarbha, Telengana, interior Karnataka and down to Rameswaram in Tamil Nadu, you will see that this is one of the prosperous regions of the country.

If the average GDP of the country is 7%, this arc will give you about 9% while the area outside the arc may give you only 5%.

You also see that this arc does not have any natural resources, but has very hardworking people.

Unfortunately, this is one place where rainfall is not there much, and there are no perennial rivers also.

The government should have concentrated on irrigation, especially of this region.

If you look back, you will see that P V Narasimha Rao was known for liberalisation policies. Nobody can turn it back.

A B Vajpayee's name is synonymous with the Golden Quadrilateral and the infrastructure projects he had initiated.

If Narendra Modi has to build a legacy, it has to be in irrigation.

Water and irrigation are two major areas in which the government is not focussing much.

We should have had at least some anecdotal references.

The economy may be growing more today, but unfortunately what we see is jobless growth.
This is going to be a worrying factor for Narendra Modi who promised 10 crore jobs.
Not only for Narendra Modi but for Donald Trump and other world leaders too.

These are the two issues I would like to speak about the Budget.

,font size=7>Because the finance minister has allotted almost Rs 4 lakh crore to infrastructure projects with a plan of laying 133 km of road every day, Rs 48,000 crore for MNREGA, affordable rural housing, etc, do you expect a revival of the economy with activities happening?

Ideally, it should. What you are talking is textbook economics.

The government would now ask the private players to partner them for a project.

The player would borrow money from the bank while his competitor would go to court and get a stay under some excuse.

There is no guarantee that a solution would be arrived at, say, in another two weeks or five months or 10 years.

By then, he would be declared an NPA (Non Performing Asset).

Now you have the new law that says your assets will be confiscated.

I am not saying that you should not penalise wilful defaulters, but to say all defaulters are wilful also is not right.

So we must have a mechanism to differentiate between wilful and what I call 'innocent defaulters.'

Last year's Budget promised it and this Budget also promises it.

Unless we have an in-house mechanism to address this in any contract, nobody will come forward to partner the government.

From A to Z, everybody has a problematic balance sheet and everybody is an NPA.

On top of that, you arrest the banker for a problematic NPA account instead of arresting the politician.

What will bankers do now?

They will lend money only as car loan, housing loan, refrigerator loan and not project loans.

Bankers are not going to lend any money to any infrastructure projects.

You mean, despite the government allotting so much money for infrastructure projects, these projects may not take off?

No politician can call up a banker and say, this is a project we are lending to and you also give money to this PPA.

The answer from the banker to the call would be, Sorry sir, wrong number!

Unless the structural issues are addressed, these projects are not going to take off.

How can they address the structural issues?

That is where I said the Budget has not taken any bold steps.

There is nothing called 100% safe borrowing.

The government has to give assurance to the banker that s/he can lend on a bona fide basis and the government would bank her/him.

When you arrest bankers for a bad NPA, the politician who is behind such lending is going scot-free.

What's the message you are sending?

That a banker should not be adventurous in lending?

So, you feel the status quo will remain and no project will take off?

Yes. The investment cycle is not happening.

Lending is not happening as lending is a product of confidence.

Lending will happen only when you have clear rules and they are administered without fear and favour.

Unfortunately, from 2011, we are stuck in 2G, Coalgate and many such scams in which only the bankers are penalised.

Unless you penalise the political class, bankers will not have the confidence to lend to any of the projects.

Where the Budget fails in addressing is irrigation.
The Budget or the central government does not appear to be serious about this issue.

The larger issue is, how do we bring back the investment cycle into the economy?

How do we give confidence to the bankers to lend?

How do we give confidence to the people to spend?

These are the biggest challenges now.

Unless the investment cycle happens, job creation also will be a question mark.

With technology and automation, you use the same number of employees today for laying 133 km as you used for laying 30 km of road during Vajpayee's time.

The economy may be growing more today, but unfortunately what we see is jobless growth.

This is going to be a worrying factor for Narendra Modi who promised 10 crore jobs.

Not only for Narendra Modi, but for Donald Trump and other world leaders too.

This is happening the world over.

With technology coming in, what 10 lawyers were doing 10 years ago, two lawyers are doing now.

The new new is we will have growth but it will be jobless growth.

How can we tackle jobless growth?

Unless we tackle the water problem and let the villages grow...

For example, you give Rs 1 crore to the panchayats and talukas and ask them to revise the water bodies and use 40% manual labour and merge it with MNERGA.

Unless we do something dramatic, unless we grow at 12% to 13%, employment is going to be a huge problem for India because of increased mechanisation and use of modern technology.

After the Budget, do you get the feeling that ideologically, the Right is moving to the Left?

That's why I said the Budget is not bold.

Yes, there is an enormous blending of Leftist ideas.

It still looks at the old means and ways of addressing poverty.

It has forgotten that infrastructure, primary education, health, water and irrigation are the means of addressing poverty.

One thing is sure: After this Budget, no Ambani-Adani tag will be attached to the government. 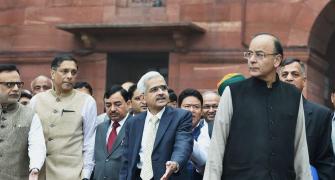 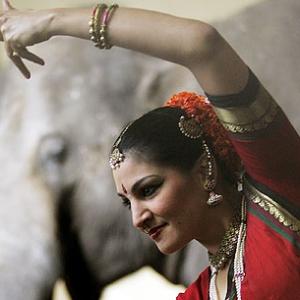 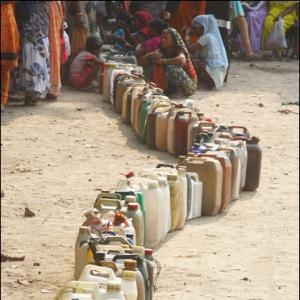