'The middle class you can hurt anytime. For revenues, politics, pleasure, anything,' notes Shekhar Gupta. 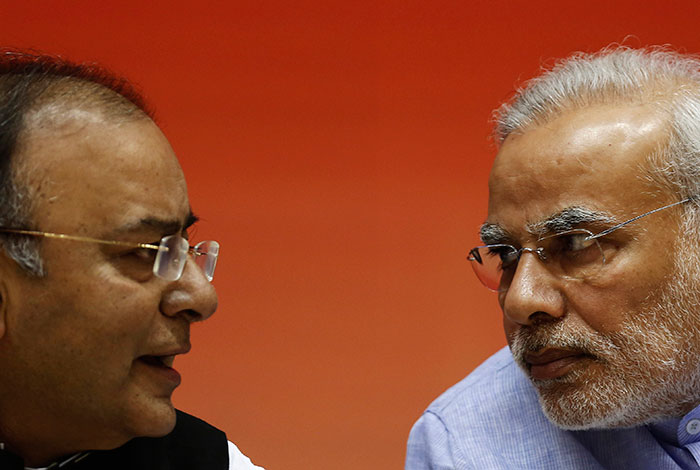 Since Casablanca's cult transcends generations, you could easily use one of its immortal lines to describe what the National Democratic Alliance government's last budget has done to India's middle class: Round up the usual suspects, as good-for-nothing cop Captain Renault had said after an incident at 'Rick's Café americain'.

So anytime our government is short of money, because of profligacy or the political need to throw money for votes, it catches the hapless middle class, predominantly those in salaried employment.

You can strangle them as much as you wish. They don't have a voice, a constituency, and a common identity. Just grab their neck, a kick in the butt, and they will cough up. There will be no political fallout.

If anything, the louder they complain, the better it will be, as it will give the poor vicarious satisfaction.

In current times, we can call it the 'demonetisation' model of politics.

Do something dramatic that enables you to go tell the poor while they might be hurting, please bear with me, you have no idea how badly the wretched rich are hit.

It is a different matter that the rich never really hurt.

The poor do, but they are in a perpetual mess anyway.

The middle class you can hurt anytime. For revenues, politics, pleasure, anything.

This Budget would have disappeared from our minds latest by the morning after. Or, let us qualify. It wasn't particularly newsworthy immediately.

Large parts of it will come back into our lives in the Bharatiya Janata Party manifestos until the summer of 2019. But it was kept alive by the carnage on the stock and bond markets.

As immediately market-destructive budgets go, this was in the category of 'dada' Pranab Mukherjee's retrospective Vodafone amendment.

So toxic, two finance ministers after him, through six Budget years, haven't dared touch it even with surgical gloves and forceps.

Three of P Chidambaram's Budgets too had elements that shook the markets, including the Banking Cash Transaction Tax, Securities Transaction Tax, and a complete rewrite of employee stock options taxation.

This Budget's assault on the one refuge middle-class savings had found over the past decade, an avenue promoted through sarkari advertising, equity-linked mutual funds, compares well with any in the past in its ability to damage the markets in the short run, and confidence, going ahead.

It has also left the middle class nowhere to go.

I write this sobered by the fact that T N Ninan, chairman of Business Standard Ltd and India's most respected commentator on the economy, had made a strong call for bringing back the long-term capital gains tax on equities.

Ninan had argued that if the finance minister wanted to minimise the deficit, he had no choice but to tax equity profits.

The finance minister obviously found his advice sound and valuable, and its economic logic for minimising the deficit is formidable.

I am addressing this from a different vantage point.

First there is a question. Can a government do whatever it wants to fund its electoral politics, unmindful of fiscal consequences and tax its way out of this?

I am not complaining about the subsidies and what are called as pro-poor schemes (expenditure is up on these).

But what about a bizarre idea like demonetisation, which shaved off wealth worth 1 to 2 per cent from an entire year's GDP, besides destroying many jobs and small businesses?

The economic proposition behind it was that it would yank millions out of the informal, cash economy into formal, banking channels, and greatly increase India's taxpayer base and collections.

Nearly one-and-a-half years after that, that dividend is missing.

Economist Kaushik Basu picked out a nugget from the Economic Survey as an admission of the failure of demonetisation -- 'It is good to see India's Economic Survey 2017-18 admit to the big mistake that was demonetisation, by explaining the economy's current slowdown in terms of the 'dissipating effects of earlier policy actions',' he tweeted.

You are, on the other hand, padding your bottom line by taxing dividends on equity-linked mutual funds. The claim that you were going to get tens of millions more taxpayers has proven to be fiction.

You are, therefore, left with no choice but to go and play Captain Renault again, and round up the usual suspects.

The second argument is political. The reason governments (all of them, not just the BJP's) are able to treat the middle class so rudely is that it has no lobby, no electoral power.

A Budget like this may be positive for your politics.

You need to convince the poor they have lakhs of crores coming their way, in this life or the next, tell the farmers you will throw money to address their distress because they have the votes.

For the middle class, which voted for you overwhelmingly, you have other compensations: Yoga, cow protection, and sorting out the Muslim 'problem' in its entirety, from triple talaq to Haj subsidies to 'love jihad'.

Some data points are embedded in our popular discourse. One of these is that only 1.7 per cent of Indians pay the income tax, according to the official data for assessment year 2015-16.

It sounds awful in a country of 1.3 billion with a large middle class, much larger than this 1.7 per cent, irrespective of whether you believe the estimates of the NITI Aayog or Economist magazine.

But you can frame that question differently. Isn't it doubly awful that only 1.7 per cent Indians pay 100 per cent of its income tax?

It follows that a great government would do something to greatly expand that 1.7 per cent.

Demonetisation was supposed to be the first 'jhatka' solution, followed by the goods and services tax, the 'halal'.

Where is that increase?

The fact is all governments have failed in this one single objective. As a result, failing to catch the wholesale tax evaders, or the untaxed crores, they keep attacking the ones that have nowhere to hide.

Where do the salaried take their savings now?

Because they do not have cash, property has tough entry barriers and it has also lost value steeply in the NDA's four years.

Like the governments, the leaky, greedy banks also know the only people they can cream to shore up the balance sheets destroyed by large defaulters are the middle-class depositors and borrowers, for housing, vehicles, or education.

Where will these savers take their money now? To gold?

When P Chidambaram's 2004 Budget led to an immediate fall in the markets, he had said the same thing finance ministers often say in such situations: Do I make a budget for the farmer or the broker?

That Budget went through many corrections and much damage control. So should this one.

India's middle class is mostly urban, and still strongly committed to Narendra D Modi, as evidenced in the Gujarat elections.

It is so loyal to him that it even swallowed the fact that over nearly four years his government has refused to pass on the benefits of lower oil prices to it and folded the increased excise collections into the fisc.

This blow to the one refuge for their savings will leave a deeper scar.