'Being one of the 150 million upper middle class consumers, I can vouch that the average expenses on white goods or clothing are minimal. Indians are not consumerist by nature,' says Colonel Anil A Athale (retd).
Illustration: Dominic Xavier/Rediff.com 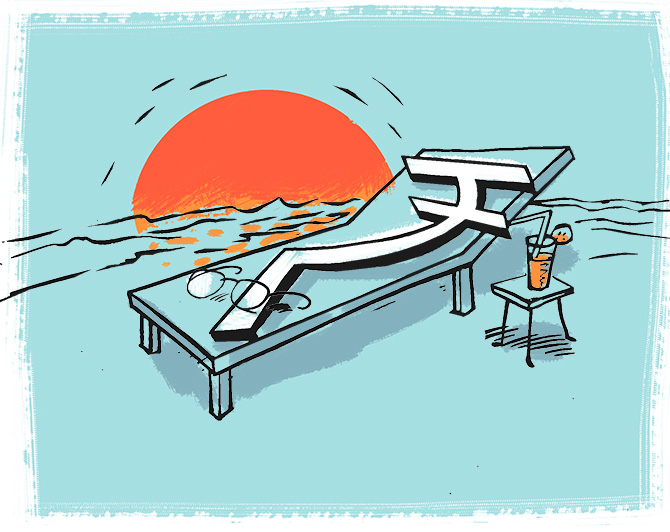 Over the last one year or so, the Indian economy has entered the slow lane, akin to a peak hour traffic jam.

Those in power and outside seem to be moving around like headless chicken and lurching from one band-aid to another.

To a non-economist historian, it seems that we are trapped in the past.

So here is a non-specialist's view of what is wrong with the economy and how it can be set right.

Nearly two decades ago, a very senior bureaucrat in the intelligence establishment told me that if I want my views/ideas to reach the top decision-makers, the best way is to write in open media. This is an effort to follow that advice.

There are three 'basic' issues that are at the root of our current predicament.

We have been carrying a reserve food stock in excess of 23 million tonnes of cereals, mainly wheat and rice.

In the last decade or so we have not had the occasion to draw even 25% of it. With the increase in assured irrigation, we have long passed the 1960s when we lived ship to mouth. Yet the mindset is that of food shortages in an era of plenty.

This tendency to live in the past is best exemplified by an anecdote from 1992. The previous year the USSR had disintegrated and there was acute food shortage in Russia. India had a comfortable food reserve and donated two million tonnes of wheat to Russia.

As the wheat arrived at Indian ports, we faced a peculiar problem. Our ports were equipped to unload wheat from bulk carriers. but had no provision to load wheat on ships for exports -- because we never thought we would export food grain!

It is time we revised the size of our food reserves and put our surplus to creative use rather than let it rot in godowns.

I had interviewed Professor J K Galbraith in May 2003. He vehemently denied that he was an economist despite his role in GATT (General Agreement on Trade and Tariffs, a precursor to the WTO). He then returned to his pet subject -- agriculture.

On being told of the food mountain of millions tonnes that India now had, he mentioned that in the 1960s itself he had predicted that one day India will be the breadbasket of Asia.

'Agriculture is one economic activity that does not obey the laws of demand and supply. But India could fruitfully use this asset through the creation of short life 'food money' and banish hunger.'

The second issue, like food reserves, is our foreign exchange reserves. It is true that the country has to have reserves especially given the fact that 70% of our energy needs are met by oil imports. We indeed have to be ready for an 'oil shock'.

But other than oil, we are self-sufficient in most requirements so is such a huge reserve of $400 billion necessary?

With our progress in switching over to solar energy and electric mobility, our need to cater for an oil shock is increasingly less.

The world is indeed entering a buyers market in oil. It is for this reason that oil majors like Saudi Arabia and the UAE etc are today making a beeline to India. Our huge reserve is like a poor man paying insurance premium while starving due to lack of money!

The third issue is regards the sequencing of reforms. It is indeed necessary to formalise our economy if we are to progress.

GST and to an extent demonetisation were steps in that direction. But formalisation of the economy should have been followed by the dismantling of 'inspector raj'.

Unfortunately, instead of eliminating it, tax terror has increased, with its attendant petty corruption. An entrepreneur is thus caught between a rock and a hard place.

It is indeed brave of anyone, and certainly by a winner of the Sveriges Riksbank Prize in Economics, to advocate in the 21st century the failed economic model of Soviet-style 'social justice' policies of using government machinery to do a Robinhood -- rob Peter to pay poor Paul. But with intelligent tweaking, it should be possible to pay Paul without robbing Peter (the tax-paying class).

'The economy grows by producing what 150 million of the top income earners consume' is an often repeated mantra, and the rest of the economy is expected to benefit from the trickledown effect.

Yet, all our economic data and surveys concentrate on the bottom 10%. Do we know where these 150 million Indians spend? Is it on white goods, cars, consumables, luxury goods or TRAVEL?

I have deliberately put the last word in capital letters as that has been one of the most neglected aspects of our economy. One does not have to be a Thailand whose 25% of the GDP comes from tourism. But even moderately successful countries like Vietnam, Cambodia or Indonesia attract far more tourists and have a much better developed tourism industry.

Being one of the 150 million upper middle class consumers, I can vouch that the average expenses on white goods or clothing are minimal. Indians are not consumerist by nature.

I remember an interview with the wife of an industrialist who had just made it to the Fortune 500 list of billionaires. On being asked how she felt on making it to the list, this lady had replied that after all this 'we are going to eat our dal-roti only'.

The Western notion of moving up the food chain does not apply to Indians. We are far more frugal in our habits and would do jugaad to re-use even throwaway products.

A final word on the auto slowdown. When all of us can see that electric vehicles are likely to be the future in the next five to 10 years, why would anyone invest in a new car only to junk it in five years's time?