Will RBI and government learn their lessons from current crisis?

By Sonali Ranade
May 28, 2012 11:42 IST
We are still in love with the idea of a strong rupee, not realising how much it hurts our poor people and the farmers, says Sonali Ranade

The dollar closed last week at 55.36 after having made a high of 56.38 against the Indian rupee. The dollar was priced at 48.56 as recently as February 2012. In the space of the last four months of this year, the dollar has appreciated by as much as 16.1 per cent against the rupee. 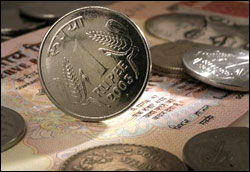 India's current account deficit this year could have reached as much as 4 pc of GDP, compared to the "safe level" of about 2.5 pc that can be financed by a mix of reliable NRI deposits, FII investments and FDI. Each of these three sources contributes about $30 billion per annum to the foreign exchange kitty, making a CAD of like amount safe to carry on the RBI books.

Has the rupee fallen enough? More importantly, will the fall in the external value of the rupee be enough to reduce the CAD back to safe levels?

The first order of business should be to restore the perspective on the dollar's rise against the INR over time. A good point to start this exercise is the peaking of equity markets in late 2007 and the subsequent worldwide crash that followed starting January 2008.

From that perspective, the dollar's current appreciation is par for course. So what's the big noise about?

The second thing to note is after hitting a high of 52 against the INR in March 2009, the dollar fell to a low of 44 in April 2010. This coincided with a recovery in the markets worldwide. In the span of 12 months from March 2009 to April 2010, the dollar actually depreciated by 18.5 pc! Should the RBI have allowed this? Would it not have been better for the economy if RBI had mopped up the excessive dollar inflows during this period and kept the dollar steady at R50?

With 20/20 hindsight the answer is clear. In fact, the RBI's policy bias needs to change to make this its default choice. But alas, that realisation is yet to dawn on our policy-makers. We are still in love with the idea of a strong rupee, not realising how much it hurts our poor people and the farmers.

Be that as it may, the dollar was allowed to consolidate at R44 between April 2010 and August 2011. This is time we thought India was invincible when any trader could have told RBI that we were in long-term bear markets and hence the FII/FDI flows would reverse.

The current dollar's rally against the INR has its genesis in the region of R44 in August 2011 and should be seen as a run-up from there. On such reckoning, the dollar has appreciated by 27 pc against the rupee over a period spanning August 2011 to May 2012.  That's about the same appreciation in terms of time and price as after the crash of the world equity markets in 2008 when the dollar appreciated by 28 pc over 10 months.

So, is it that markets are working normally and the fall in the value of the rupee is in anticipation of the drop in FII/FDI flows? In short, have the markets merely discounted the inevitable effect of the ongoing crash in equity markets worldwide as in 2008? The answer, at least partially, has to be in the affirmative.

The dollar's appreciation against the INR will cut into the attractiveness of gold as an investment. Gold constitutes the second largest item of imports after crude. Gold for investment has averaged $20 billion per annum. As the cost of imported crude is passed through into domestic prices, the demand for petroleum, oil and lubricant products should moderate a bit.

Given that NRI deposit inflows will increase slightly to around $30 billion, FII + FDI is already at about $20 billion, what exists by way of uncovered gap in financing CAD is approximately $40 billion. Of this, a fall in gold imports alone would cover around $15 billion. Apart from that, exports of commodities like cotton, tea, sugar, soya and a pickup in software services exports should be able to cover the balance gap of $25 billion.

Hence, after the current bout of rupee devaluation, the financing gap in the CAD appears adequately covered.

The dollar's 18.5 pc depreciation against the rupee in 2010-11 lost us a huge chunk of BPO business to Philippines. The RBI must make it a policy to monitor the weakest Indian BPOs to keep tabs on marginal labour costs and use that input to guide the dollar value in Indian markets.

Let us face the facts. It is the services business of BPOs at the margin that keeps our huge army of clerks employed gainfully and drives the demand of everything from housing to branded goods. Lose these jobs, and you are asking for deflation. Never again must RBI buy into airy-fairy talk of "moving up the value chain" and KPOs etc. Keep your feet on the ground and watch your weakest link in the chain.

That weak link is our low-end call centre business and as long as there are unemployed youth, it is the RBI's business to see that they are employed gainfully in profitable BPO exports. The RBI and GoI must not forget this lesson in good times. The weakest link at the margin matters the most.

So what is different in the current crisis from the one we faced in 2008? The big answer lies in our fiscal deficit. Back in 2008, the government was able to step up its fiscal deficit from 4.5 pc to about 6 pc of the GDP to absorb the deflationary pressure of rising dollar along with a fall in the inflows in FII + FDI.  It no longer has that cushion and will not be able to absorb the shock as painlessly as in 2008.

Second, inflation in 2008 was in check. The profligacy of the wasted years of 2010-11 is now catching up with us in terms of inflation, most of which is structural and embedded deeply into food prices. We cannot address this structural food inflation in agriculture with monetary policy. There have to be deep reforms in agriculture to break the logjam of high inflation combined with a slowing economy.

What the government needs to do to works its way out of the crisis is not rocket science.  Perhaps the easiest way out would be take steps to restore profitability to lapsed BPOs and encourage more of them in selected towns that can support them in terms of communication links, telephony, housing and power. The gestation period here is small and the results should be quick.

Further afield, there is no alternative to FDI in retail as a means of breaking the policy logjam in agriculture. It is more a domestic requirement to open up the agriculture sector than to attract foreign investment. Bold moves here would also help restore the faith of FIIs in reforms.

Last but not the least, we need a cogent, well-articulated plan to cut the fiscal deficit. The pass-through of crude prices is a beginning. It should be carried through to its logical end without backtracking. It would also help if government began to cap food and fertiliser subsidies in terms of an absolute value and swore off open-ended doles.

You may be poor today but you can't remain poor forever. Welfare programmes must include processes to graduate out people who are being helped in a phased manner.

If you do not consolidate your gains and reform during your good times you are forced to do that in the worst of times. If the RBI and the government learn that one lesson from the current crisis, we will have done well. Is that too much to hope for? 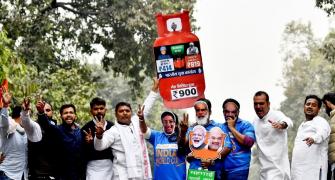