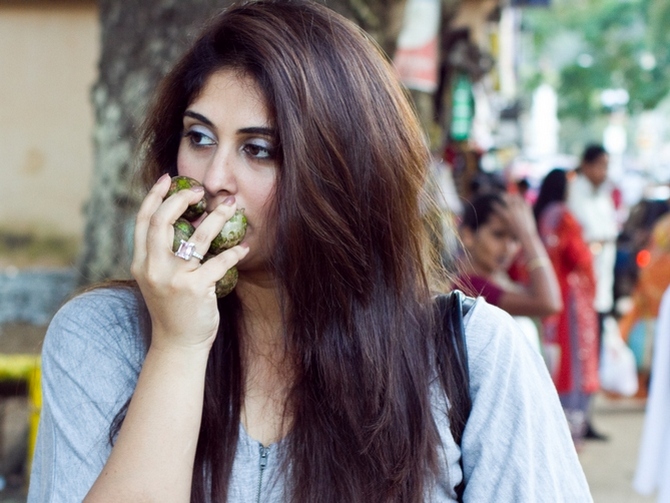 Actress-turned-chef-turned-author Tara Deshpande Tennebaum's book on Konkani cuisine, A Sense for Spice, is a fascinating account of a family's love for food. We excerpt some recipes from the book.

Recounting stories and recipes from her grandmother's kitchen, Tara Deshpande Tennebaum's book A Sense for Spice harks back to a simpler world and hands down traditional Konkani recipes.

Earlier, in this interview to Rediff.com, Deshpande spoke about her how she came about to fall in love with India and its cuisine from her grandmother's kitchen and how she hopes to keep some traditions alive while starting some new ones of her own.

We bring you excerpts from her mammoth, almost memoir-style, introduction as well as recipes from her book.

When I was old enough to toddle into Grandma's kitchen, I was given my own polpat, a miniature version of a rolling pin and board made from wood. Grandma gave me leftover bits of dough to play with.

I rolled many chapattis but it was not until I was eleven, that I was able to create a flawlessly round and even piece of bread. Until then, the dough took the shape of several countries. 'Sweden?' Nani teased. 'Or is it America? Your mother was six when she rolled a perfect chapatti.'

My mother is a cook of diabolical skill and I can't compete.

I think I first fell in love with India and its food in Grandma's kitchen. It was a magical place. Fantastical. It opened every day with the first light of dawn. Sounds came in cozy, familiar sequences.

I lay in bed, half-awakened by the whispers of Grandma's Chanderi sari and the sweet fragrance of her jasmine hair oil; by keys clunking and the kitchen door opening with a quiet creak; by the tinkle of cups and saucers, the gurgle of milk, the slurring of drunken tea leaves against a sieve.

Cooking started in earnest only after the sacred ritual of tea. The house resounded with the jangle of bangles on Grandma's arms as she flitted from one pot to another, soothing, coaxing, and nudging nature's bounty into its proper place.

Grandma always said the gift of cooking made and unmade her. The Admiral's wife, as she was later known, was a tall, soft-spoken woman with luminescent skin and silky tresses. She looked so ethereal, it was hard to imagine her bent over a hot, steaming pot. But Grandma was a fabulous cook. She cooked and cooked and we ate and ate.

Throughout their married life, in the dozen homes they lived in, the old grandfather clock, wound and oiled regularly by Grandpa announced the routine and pace of my grandmother's life. When he died she gave the clock to my mother. It now sits in the passageway in my mother's house, unwound and defeated.

My sister and I look at it sometimes and remember the great meals and the great burdens borne by women like my grandmother and generations before hers that allowed their men to make such successes of their lives. We thank God we no longer have to jump to the sound of a gong.

The year Grandpa died, my grandmother decided she would never cook again. I began, at this time, to cook with greater purpose. I think I had a subliminal need to preserve family traditions, so many of which have their roots in our kitchen.

With time many of these traditions have changed, some are gone forever like lamps set afloat in the sea, never to return.

But I am trying to make new ones and also keeping some of the old ones alive, whether I'm in my kitchen in New York or Mumbai, Boston or Belgaum.'

Recipes from a Konkan kitchen

These delicate crepes are folded into a triangle to resemble a betel nut leaf preparation called paan and are very popular fare in Konkan homes.

If you have never made pole or dosas before, opt for a good quality non-stick pan instead of a traditional cast-iron griddle. Can be made ahead and warmed in a covered dish in the microwave.

Wash the soaking rice and drain completely. Pulse and grind to a powder in a food processor for 3-4 minutes.

Purchase a copy of A Sense for Spice here! 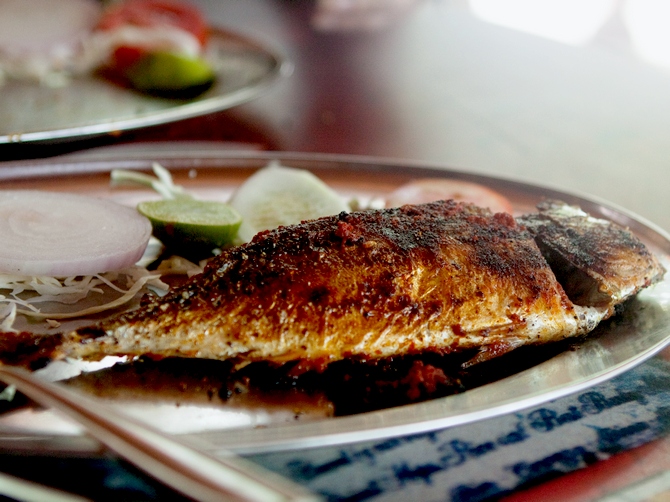 Mackerel has a unique flavor, mildly bitter and salty. Go Indian and serve this fried fish with curd rice. For a continental meal, a creamy sweet potato puree and a tangy salad creates good contrasting flavors.

These bite-sized appetizers are not originally Konkani but are nevertheless very popular in the Konkan. Delicious with a cold beer. You can substitute the kacharia, a wild sour berry found in Rajasthan, with raw papaya and dried mango powder or amachoor. Kacharia acts as a tenderizer.

For the spice paste

This triangular snack known worldwide as samosa is called chamuca or chamuncha in Goa and is generally non-vegetarian.

Unlike Punjabi samosas, made with a thick crusty refined wheat flour pastry, these are made with samosa patti, a thick phyllo-type dough sold in stores as strips.

They are much easier to work with because they are thicker than Greek phyllo. My paternal grandmother made two delicious versions with spiced chicken and seafood filling.

Chow chow, which is the minced chicken filling, was also made as an entree for a quick Sunday dinner with phulkas.

If you get a samosa patti that's a different length, don't worry, just cut them to size with a pair of scissors.

These can be rolled, filled and frozen in an airtight container for several days. Line each layer of chamunchas with plastic or butter paper. They can be fried frozen as well.

Basil is native to India and several varieties are available. This stir-fried okra with sweet basil has a delicious and unusual flavor. Serve with flatbreads and lentils.

Sitaphal is commonly called custard apple but is in fact a sugar apple. It has a short shelf life so consume this desert quickly -- I promise you, it won't be difficult. Rabdi is easy to make but time consuming. You can also buy it ready-made and stir in the custard apple.

Excerpted from A Sense for Spice by Tara Deshpande Tennebaum, published by Westland and can be purchased here.