Sign in  |  Create a Rediffmail account
Rediff.com  » Getahead » How a filmmaker is trying to change India's healthcare system 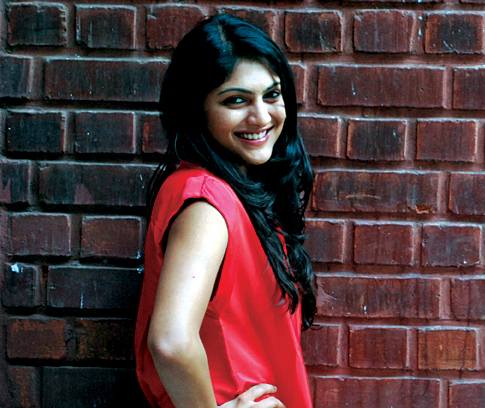 "We found that thousands of children like Roona are born with birth defects every day, but are ignored because their stories are not deemed 'sensational' enough," said Pavitra Chalam, a documentary filmmaker.

"Roona had won a rare lottery and while the world celebrated her fortune, others like her were sent home to wither in silence."

It is this indifference that Chalam wants to change through her documentary Rooting for Roona and get viewers partner with grassroots organisation to improve India's healthcare system for the poor.

At a large, open, industrial style loft in West Chelsea, young people gathered over wine, cheese, and fresh root vegetables to mingle and learn about a new documentary film being made in India.

The people behind Rooting for Roona, a story about Roona Begum, a toddler who has survived the first few years of her life against abysmal odds, is hoping to raise a total of $150,000 to fund the project, and they're currently about one-third of the way to their goal.

At the Centre for Social Innovation, Pavitra Chalam and Vanita Boswell, addressed an intimate crowd of attendees about the crowd funding campaign they launched in July, 2013, and showed a moving trailer of the film.

For those who had seen the photograph of little Roona -- showing how her rare illness has impacted her health and severely enlarged her head -- that went viral on the Internet last year, the images on the screen may not have come as such a shock.

But for those completely unaware of Roona and her condition, to see her for the first time was jarring.

"People are really responding to this," said Boswell, who is leading the fundraising efforts. "Even those who have never been to India or know nothing about it but they have children and can't imagine what this would be like."

Still, 90 per cent of the money that was raised in an IndieGoGo tester campaign -- $37,000 in just 17 days -- was from donors in India. They also raised another $10,500 through direct contributions, and are hoping to raise the rest along the way from corporates, organisations and donors.

Boswell has used her ties in the non-profit space in the US to hook up with GOOD/Corps, which has taken the project on pro-bono. All the funds raised will go towards the making of the documentary, between research, equipment, crew, post-production and travel, accommodation.

The goal is to complete principle photography by the end of 2014.

Roona's story is both typical and not. Her parents Abdul and Fatema, who lead a hand-to-mouth existence with Abdul earning 150 rupees a day, struggled to cope and understand what was wrong with their daughter.

Their trips to state level government hospitals were in vain as these were poorly equipped to treat her. With no means to travel beyond their home state of Tripura, Abdul and Fatema were resigned to their daughter's fate.

A single photograph changed everything. It triggered an amazing chain of events that eventually resulted in Roona being admitted to one of India's premier private hospitals in the nation's capital. Headlines across the world celebrated her journey to, hopefully, a more healthy life.

Then the brouhaha settled down and the world moved on.

Chalam, who studied at the New York Film Academy, explained how this played into her desire to make a movie about Roona, and more broadly, why she founded Bangalore-based CurleyStreetMedia, a production company that creates films that shine a light on social ills and a path to change.

"I made my first film about 10 years ago in Pakistan. It was called Bus and it was sort of a statement of peace between the youth of India and Pakistan, and after that it was a complete movement into the world of filmmaking, and documentary filmmaking specifically. And I lived and worked abroad in various places for a few years; I studied film-making in New York, and I went back (to India) and continued making films," she said.

"The reason I do it is because I think it's a very powerful medium, and I've seen the power and impact of films in social change and social justice. With every film, the wider the reach, the more my conviction to keep doing what I'm doing."

Rooting for Roona follows Roona and her parents on their journey as they seek out information and solutions for hydrocephalus, a birth defect caused by build-up of fluid in the brain leading to massive swelling of the head.

The disease is estimated to effect one to two of every 1,000 babies, but as uncommon as it is, Chalam hopes that viewers can see Roona as representative of the 1.5 million children born with birth defects each year in a country where many families have little to no access to healthcare.

"We found that thousands of children like Roona are born with birth defects (congenital anomalies) every day, but are ignored because their stories are not deemed 'sensational' enough," she said. "Roona had won a rare lottery and while the world celebrated her fortune, others like her were sent home to wither in silence." 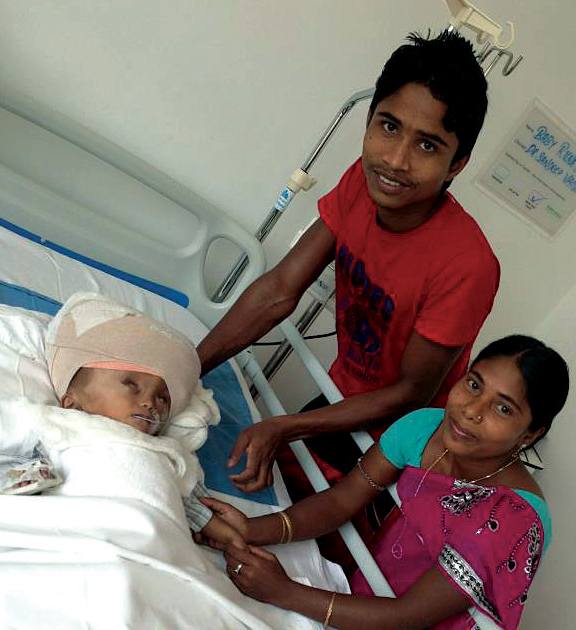 Image: Roona with her parents after her first surgery.

Chalam's aim is to make a film that not only does justice to Roona's story but also creates awareness about the lack of medical care available to children from underprivileged background in India. She believes her film will help shape public opinion about healthcare and push for much needed reform in the child health space.

The Curley Street Media crew was with Roona and her parents since they arrived to the hospital in Delhi for treatment, determined to document her story. Many questions arose from being around them in this context: Why was Roona's condition allowed to get so severe? Why did the best hospitals in her state turn her away? Roona's doctors unequivocally declared that had Roona been treated at birth, her chances at a normal life would have multiplied manifold.

As Roona recovered from her major surgery, Chalam and her team reached out to paediatric specialists in major private and public hospitals in Delhi. They interviewed public health workers, experts in the field and influential social workers. Many different parties and entities were involved, and each had their own views and opinions about healthcare in India. Some of these voices are in the documentary as well.

"The film is not just about showing the failure of the public health system in India -- I think that is apparent -- but it's also about health practices that work," she said. "And Roona's story, I think more than anything, is an absolute symbol of hope. The odds of her living were ridiculous, and she has survived."

Boswell explained that the film is a call to action to viewers, helping them understand how they can partner with grassroots organisations doing work to serve communities in need of better health services and trying to improve the system overall. She said the goal is to ultimately get the documentary translated to different languages and do a rural roadshow with it through villages across the subcontinent.

"We want to use this film as an awareness-building tool and then use it to connect with the soldiers on the ground, whether it be hospitals or Doctors Without Borders or some other group to have contact with us and are able to educate families and can go into these villages and teach them," she said.

Those interested in contributing the campaign can visit www.rootingforroona.org.