Sign in  |  Create a Rediffmail account
Rediff.com  » Getahead » The world at his fingertips: Meet the National Geographic Bee champ 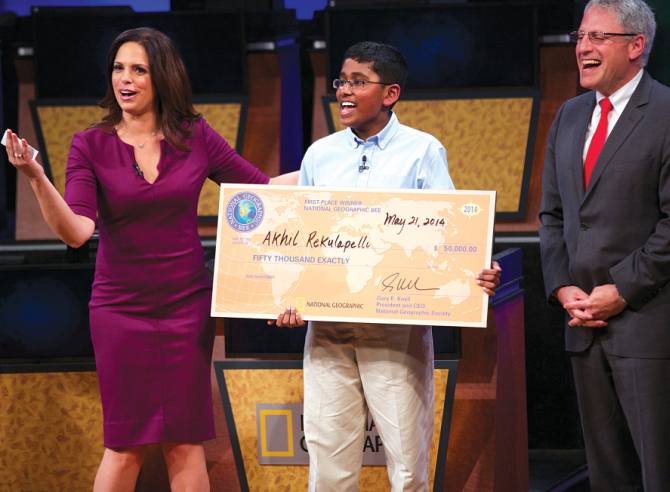 Akhil, who finished fourth at the 2013 National Geographic Bee, is the first student from Virginia to win the competition.

The fourth place and $1,000 went to Pranit Nanda, 14, of Colorado, an eighth-grader at Aurora Quest K-8 School in Aurora, east of Denver.

There were nine perfect scores in the preliminary round. Akhil beat out seven other contestants in the tiebreaker round to secure the final spot in the top 10.

The final round was moderated for the first time by award-winning broadcast journalist Soledad O'Brien, who took over from the Jeopardy! host Alex Trebek.

Akhil who answered all the three questions correctly, outlasted the other nine finalists and ultimately prevailed after going one-on-one with Ameya -- the youngest finalist, with the decisive question being, ‘What African country is building a new capital called Oyala in the rain forest, 65 miles east of the current capital Bata?' 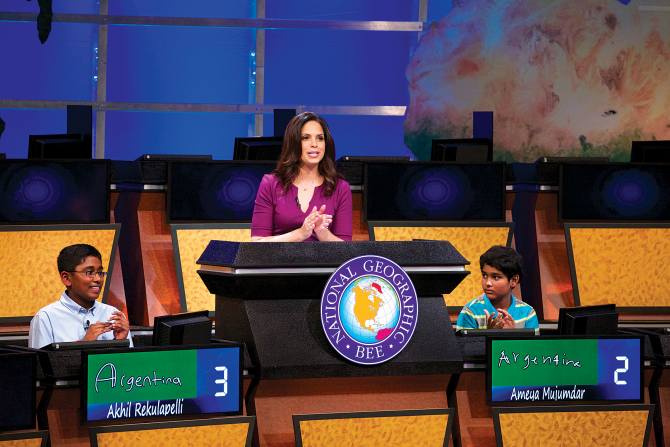 The audience was spellbound when Ameya, on the tiebreaker question recalled the Earth's precise diameter at the equator -- 7,926 miles -- which had many adults exclaiming, 'Wow! Wow!'

Born and raised in Fairfax County, Akhil is the son of Dr Prasad Rekulapelli, a physician specialising in paediatrics, and Swapna Rojanala. Both of them hail from Warangal, Andhra Pradesh.

Akhil has one sibling, a sister, Anika, who is nine and in third grade.

In an interview with India Abroad, just after he and his mother arrived in New York for an appearance on ABC's Live with Kelly & Michael, Akhil said, “I knew that all 10 of us had an equal chance but I really, really wanted to go out and finish it off this year.”

"I just kept telling myself that I have the ability to win this competition and I did," he added.

How did he train for the competition?

"My coach Kumar Nandur gave me tips and tricks on how to stay calm and collected and then gave me key pointers on what kind of questions they are going to ask. And I focussed on a general overview of the countries and then went much more in-depth with each one of them," he said.

"My mom was surfing around after I barely studied and fell short at the Virginia state bee when I was a sixth grader, but realised that I have the potential to win the national championship and because she wasn't sure if she was going to coach me and she ended up finding this coach on the Internet. And, then it started from there." 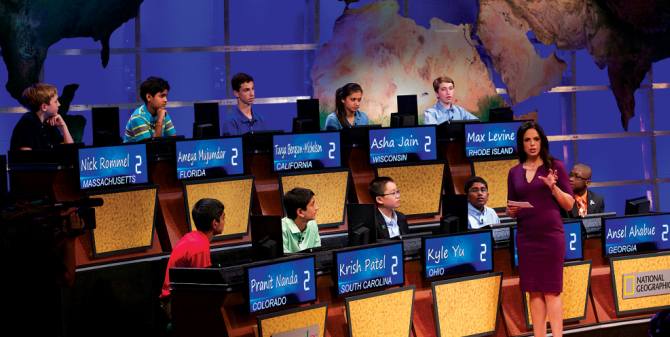 Image: The top-10 in the final round of the contest.
Photographs: Rebecca Hale/National Geographic Aziz Haniffa

Nandur, apparently has offered free tutoring to several bee contestants and had coached the 2010 champion.

Akhil said his parents' support was also equally important. "They were just amazing and they were probably the biggest help that you could ever have. They would quiz me everyday and at every opportunity and then would also motivate me to do well and also gave me the relaxation time after I was done studying and helped me decompress," he said.

Asked how he felt to have bested over four million students who were in the fray, Akhil said, "It makes me feel good that all my hard work has finally paid off."

He added that he would like to do medicine and become a surgeon "and possibly work for Doctors Without Borders."

Did he know the winning answer immediately or did he have to agonise over it?

"I really had no idea what they were talking about, but when they said the Neuquen Province, then I knew the answer," he said.

His mother Swapna -- who worked in information security, but quit working three years ago to spend more time with her children and help her husband with his medical practice -- said that feeling proud over her son's performance was an understatement.

"I am just so elated. He truly is an amazing kid. So self-motivated, and so self-directed that we hardly have to say, 'Hey, do this, do that,' unlike most of the parents we hear from," she told India Abroad. "He is independent, intelligent and we really feel we are so blessed in having a child like him."