Ah, to be young and in love.

We consider it a matter of the heart, but let's face it; being in a relationship at any age is mainly a pain in the ass.

Dealing with compromise, insecurities, conflict, baggage, gender bias, your significant other's family and friends who aren't quite as significant (but you need to pretend they are anyway)... the list of complications that can arise from being in love unwinds faster than a runaway toilet roll.

And all this is sometimes even before marriage and kids enter the picture. After which, of course, you're f... -- oh well, let's keep it PG for now, shall we?

Starting up right here on Rediff.com, we have some meddling to do.

Why? Because I've been told I give some pretty great advice. And some people think I'm funny, so if I can give you a laugh or two after your girlfriend stuck a fork in your face, why the hell not?

This column is not for the psychologically disturbed, or those who need professional help for severe mental trauma. It's for those who can't discuss their issues freely with parents, or friends, or partner. Or dog. Or just want a fresh perspective from an unbiased, objective-thinking individual.

Have a seat on the virtual Love Guru couch and tell me all about it.

As for those who want a preview of what's in store, let's address a few of the most common relationship problems faced by people everywhere, shall we?

Those in this first category, well, they are technically not in a relationship, but they are pounding the pavement at Heartbreak Avenue anyway.

We've all been there sometime or other, haven't we?

Mr Nice Guy loves the girl, then she looms large with a rakhi, throttling his dreams of romance with a bit of beaded thread (and don't Indian women wield it like a weapon against unwelcome attention!).

Or the girl wants the guy, and he has fallen for some Insta influencer-type hottie.

So what do you do when the object of your affections considers them an affliction? There's always the story of someone coming to realise their admirer's worth belatedly, but let's not get into stalker mode yet.

The best thing you can do is put your bleeding heart back in your pocket and walk, till enough distance and time have elapsed that you feel sufficiently recovered.

No, chances are s/he won't realise, like in the movies, just how precious you really are. And yes, restraining orders really are a thing.

Friction with the in-laws

Sounds cliched? You loooove your boyfriend's mother and she takes you on shopping trips with her? Cute.

Alright, there are a few couples who make it work with the partner's parents, but let's leave those needles in the haystack where they belong (*eyeroll*) and cut to the chase.

Most people run into rocky terrain with the in-laws sooner or later. And the longer your relationship, the rockier the terrain. It's almost a mathematical principle, really.

So what do you do? Lump it.

No, you can't change people.

Yes, you can communicate openly, but not everyone does. Some people like to hold it in until they burst. So you could talk till your blue in the face, but the M-I-L may just sit there nodding and smiling while inwardly picturing you bound and gagged with a gun to your head.

Compromise? It's difficult enough with your partner, who, let's not forget, you are in love with.

And yes, marriages have fallen apart over the placement of the water filter in the kitchen. So don't make the mistake of trying to be one big happy family under one roof, says almost every person ever married.

This is a tale as old as Time.

Many are of the opinion that man's inherent nature is polygamous, but then a relationship is usually a commitment to a single individual and so is marriage, unless both parties have their own rules/ an open arrangement (if you haven't heard of the term 'throuple', yet, look it up).

So where does what's termed natural attraction end and what's moral begin?

Is a relationship marred by infidelity worth saving? Can it be saved?

Once a cheater, always a cheater -- does that hold true?

The circumstances surrounding such a predicament can differ extensively and there is no clear-cut solution. Sometimes it's only about sex, sometimes it involves extended family and children. Dealing with the fallout can be devastating and every instance is unique.

And I think that's a wrap for today.

Like the elusive Lady Whistledown of Bridgerton fame, I'm going to hang on to my identity for a bit. Meaning permanently (sorry, trolls; feel free to e-mail in, though, and if you are entertaining enough, maybe we'[ll publish you too).

And be warned, nothing is professional about the advice you are going to receive (it's free after all).

So if you feel you want some personal advice, do write in to getahead@rediff.co.in (Subject: Ask Love Guru); those who want to remain anonymous, do let me know and your name won't be disclosed when publishing responses to your queries.

LOVE GURU
Related News: Heartbreak Avenue, M-I-L, Uttam, com, Rediff
COMMENT
Print this article
'Boyfriend's been laid off, takes it out on me' 'She wants to have sex before marriage, I don't' 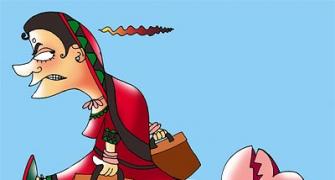 My wife left me. And she refuses to return!

I love a married man! What do I do? 'My wife is in a relationship with someone'