To save Kolkata's crumbling heritage

Namrata Acharya finds out more about a movement aimed at preserving not only the mansions of north Calcutta and the grand colonial buildings of central Calcutta, but also the architecturally modest, yet unique, houses of south Kolkata. 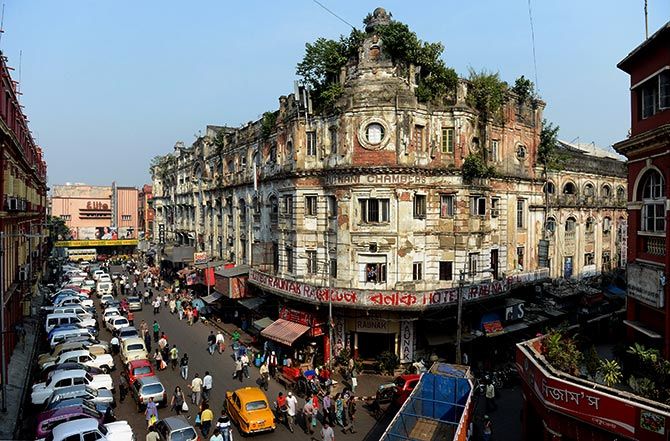 IMAGE: While both north and south Kolkata collectively constitute the essence of the city, it is the south that is under greater threat from real estate developers as it constitutes the prime residential area. Photograph: Gareth Copley/Getty Images.

When you think of Kolkata's grand old structures -- mansions dating back over a century, grandiose neo-classical homes where the zamindars (landlords) and rich traders of the East India Company once lived -- the northern part of the city is what comes to mind.

In south Kolkata, the abode of middle-income Bengalis since the late 19th century, it is concrete high-rises that virtually envelope the landscape. Yet, intermittently, an ageing two- or three-storey house catches the eye.

To get a sense of how south Kolkata once looked, one can refer to some of Satyajit Ray's movies set around the middle-income Bengali families of the 1960s and 1970s. These films capture the raw ambience of a Bengali para (neighbourhood or locality).

It is this rawness that writer Amit Chaudhuri has been relentlessly struggling to preserve through Calcutta Architectural Legacies (CAL), a citizen's initiative that has, as its latest effort, launched cal-legacies.com, a website aimed at preserving the fading legacy of old Kolkata.

In 2015, in an open letter to West Bengal Chief Minister Mamata Banerjee, Chaudhuri stressed the need for stringent laws to protect the heritage zones of Kolkata.

What's unique about CAL is that it is working towards protecting entire heritage zones rather than a few impressive structures of the colonial era. It strives to protect the simple, architecturally modest, yet unique, houses of Kolkata, especially south Kolkata.

"This ethos is remarkably distinctive, and unique to Calcutta; it includes not only the rajbari mansions of north Calcutta and the grand colonial institutional buildings of central Calcutta, but the houses in which people have lived, and still live, in various neighbourhoods in the city -- Bakul Bagan, Hindustan Park, Kidderpore, Paddapukur Road, Bhowanipore, Sarat Bose Road and Ganguly Bagan, to name a few," Chaudhuri wrote in the letter. "These and others areas should really be declared heritage precincts."

"In south Kolkata, the buildings are not as grandiose but present an interesting play of European and Bengali architecture," says Chaudhuri. "These are houses built in the 1920s and 1930s by middle-income, educated Bengalis. In fact, no two buildings are alike and such multiplicity is rarely seen."

Through cal-legacies.com, one can buy or sell a heritage property to a like-minded person. The website is also a platform for connecting with artisans and architects who specialise in restoring heritage buildings and those who can provide legal help for protecting the old houses.

"This is not a heritage conservation project, but an organisation working to help protect heritage," says G M Kapur, a conservationist who is a part of Calcutta Architectural Legacies Mentor Group.

At present, the Kolkata Municipal Corporation has on its list close to 1,000 heritage monuments where new construction or renovation is governed by stringent laws.

"Even a city like New York has 23,000 heritage structures," says Kapur. "There is an urgent need to bring about laws to protect the city's heritage and extend the list."

Don't miss: The sights and sounds of Kolkata In pics: The City of Joy, Kolkata at its best 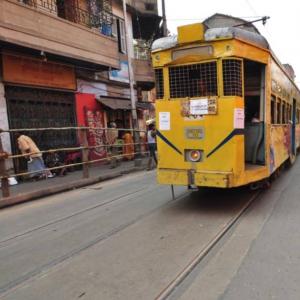