Where paneer came to India from... How sambar got its name... Gulab jamun does not have Indian roots... 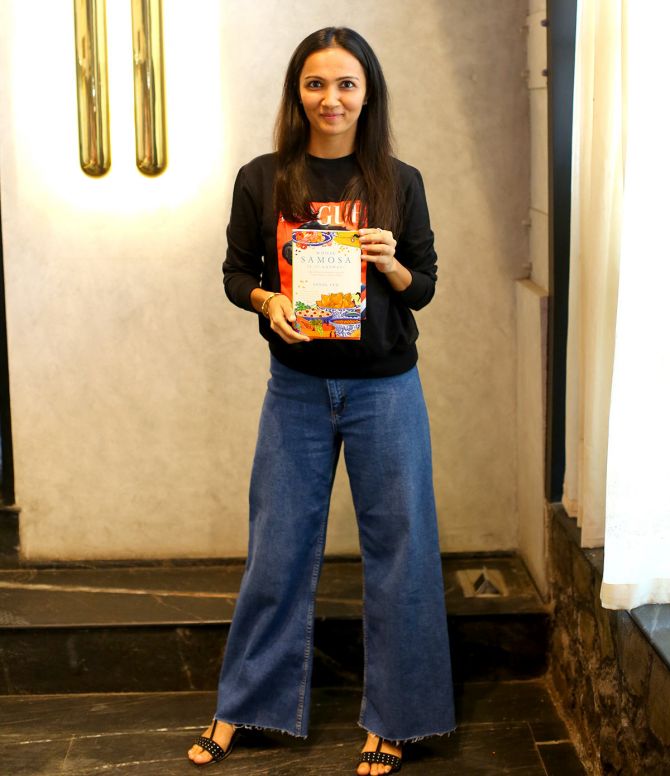 In Whose Samosa Is It Anyway, author Sonal Ved traces the history of popular foods believed to be quintessentially 'Indian'.

Chillies made an appearance in Indian kitchens around 1542 in the Malabar region, thanks to various intrepid foreign travellers or traders.

'In the Mughal cookbooks, you'll find a mention of pepper, cardamom, coriander seeds, cinnamon, cloves and fresh ginger', Sonal writes in her book.

'But there is little mention of garlic and turmeric. The chilly is completely missing -- it arrived in India only in the 16th century with the Portuguese.'

The Dutch first brought tea seeds from China to India in the 17th century and it was the British who were responsible for its domestication and raising its popularity in our country.

Believe it or not, folks, but the earliest evidence of paneer's usage can be found among the nomadic tribe of Bakhtiari of Iran's Isfahan region.

We, Indians may take great pride in the exhaustive variety of dishes we can rustle up with rice, but 'to eat rice in such a refined manner is something we learnt from the well-travelled cookbooks of the Mughal era'.

'It was the Mughals who taught us about cooking with fruits, often using them with meats like lamb, something that was unknown to Indians until then.'

As for cashew nut, it was brought to our shores by those experimental, pioneering Portuguese too.

"They (the Portuguese) got acquainted with pineapple, corn, papaya, cashew nut, sweet potato, tomato, custard apple and sapodilla during their interactions in South and Central America," Sonal tells Anita Aikara/Rediff.com.

So, whose samosa is it anyway? In your book sanbusa is said to be its predecessor.

I would say the samosa has Central Asian roots.

Sanbusa is a common dish found in various cookbooks of Asian, Islamic and Iranian lineage, and its the predecessor of the great Indian samosa. It's named after samsa, the Central Asian pyramidal pastries, and has been referred to as sanbusak, sanbusaq or even sanbusaj over the centuries in various books.

This seemingly Indian dish had travelled far and wide before it became a mainstay in our gullies.

The first mention of samosa can be found around the 10th or 11th century in the Middle East, in historian Abolfazl Beyhaqi's work Tarikh-e Beyhaghi, where it is referred to as sambosa.

In its original form, as made in the kitchens of the Ghaznavid empire (the Turkic dynasty who ruled parts of northern India first under Mahmud Ghazni), samosas were pasties filled with meat and dried fruit and then deep fried.

We don't know when exactly it assumed its current form, filled with simply minced meat or potatoes and peas.

But we do know that when Akbar annexed the Malwa Sultanate in 1562 CE, the Ni'mmatnama (a medieval Persian cookbook) was procured by the Mughals, and subsequently by the sultanate's kitchens too.

While you were doing the research for this book which foods were you quite surprised to learn did not originate from India? Were there any fascinating culinary traditions you discovered during this journey?

Yes, there were many!

But this one is my favourite one: There are many theories that talk about how cottage cheese or paneer got introduced to Indian cuisine.

One theory says that the Portuguese taught the Bengalis (when they had outposts in Bengal) how to curdle milk and turn it into chenna or cheese, which forms the base of a majority of their famous sweets even today, including the rasgulla.

It isn't too convincing for me and here's why: Remains of pottery that were shaped in a way that allowed liquid (whey) to be strained out from milk solids were found even in the Indus Valley ruins.

While we don't know the exact use of such vessels, some historians claim that these could have been used to make paneer, and thus paneer existed way before the Portuguese invasion.

Another proof is that cattle played an important role in Harappan and Vedic society. In fact, milk was referred to as a 'complete food' in literature from the Vedic period.

Having said that, we don't find the word 'paneer' clearly mentioned until the Kushan dynasty. Literature from this period speaks of warriors consuming a solid mass of dairy made of a mixture of warm milk and curd, while the whey would be distributed among the poor.

The word paneer comes from the Persian, Armenian and Azerbaijani word panirpeynir' -- both of which refer to various preserved cheeses.

The earliest evidence of the word's usage can be found among the Bakhtiari, a nomadic Iranian tribe from the Isfahan region, who developed a cheese called paneer-khiki, which literally translates to 'container and skin'.

This made sense to me, as the Kushan empire (of which Kanishka was its most famous ruler) did stretch from India towards Central Asia and the Middle East.

And that's why I wouldn't give credit to the Portuguese for paneer and (why I feel) it may have come to India via this (other) route.

How much time and research went into this book? You have a day job. Was it easy to find time to research?

It took about two-and-a-half years of research to write this book.

I was doing both simultaneously -- researching and writing.

I am the content lead at India Food Network and Tastemade India, besides being the contributing food editor at Vogue India. So it's many things, yet they all involve content around food, so one fuels the other.

While writing my first and second books: Gujju Goes Gourmet and Tiffin, I had full-time jobs too, so I think I've learnt the fine art of multitasking.

You mentioned that Indian cuisine is at least 4,000 years old. Which was the earliest documented Indian recipe?

In June 2016, I read about one of the most interesting pieces of research on the Harappan culinary world. It was in an article published by the BBC about a project undertaken by archaeologists Arunima Kashyap and Steve Weber, of Vancouver's Washington State University, in 2010, to find clues to the earliest foods of the Indian subcontinent.

The duo conducted a starch analysis of the molecules gathered from the utensils and tools found at the excavation site in Farmana -- south-east of the largest Harappan city of Rakhigarhi. They used this method to determine what the Harappans ate during the peak years of their civilisation from 2500 BC to 1800 BC.

Molecules of starch were extracted from pots, pans, stone tools and the dental enamel of both humans and animal fossils, since animals were often fed leftovers.

Kashyap and Weber's research brought to the fore a picture of a more nuanced meal which they may have been eating.

Their research pointed to the possibility of eggplant, turmeric and ginger (maybe even clove), and they came up with a rough recipe, titled 'proto curry' (made from these ingredients), or what may have been the very first curry of the subcontinent, over 4,000 years ago.

Is it true that almost every popular Indian dish is the product of our long history of 'invasion'? Would you please cite a few examples?

I would not say every popular Indian dish, but some such as naan, haleem, falooda, gulab jamun and kulfi are not Indian, but influenced. IMAGE: Don't be surprised to hear that the traditional Indian sweet gulab jamun is not Indian.
Photograph: Francis Mascarenhas/Reuters

Which royal Indian kingdom was known for its fabulous feasts? What did their meals look like?

The Cholas. This was an empire known for its fabulous feasts.

The kingdom formed one of the three great royal divisions of early southern India -- with the other two being those of the Pandiyas further southwards and of the Cheras in the west.

The Chola kingdom was in existence even during 300 BC-250 BC, as mentioned in the inscriptions of King Ashoka, where it is called the 'Choda' dynasty. There he was referring to the early Cholas.

I'm talking of the period of the medieval Cholas, for whom food was beyond sustenance.

At their peak, the kingdom had grown wealthy and had dominance over sea trade. It had conquered Sri Lanka, the Andaman and Nicobar Islands and some parts of South-East Asia as well -- the islands of Sumatra, Java and Bali, and the southern part of the Malay peninsula.

The Cholas were probably one of the earliest Asian empires to have experimented in overseas trade and expansion, and with the help of their famous Chola navy had mastered the art of seafaring, which aided further expansion and adventures outside the Indian subcontinent.

Obviously, they prompted a lot of culture and culinary exchange, especially with the Chinese and Arabs, with whom they exchanged silk and spices.

Since the Cholas had access to luxurious Indian spices and the know-how to cook with these, local Indian cuisine benefitted from and refined itself under their reign.

Literature from the Chola period talks about game meats such as boar and porcupine being consumed, a Chola prince gorging on wild fruits from the forest, like jamun, and vegetables like bamboo, elephant-foot yam and jackfruit.

The most interesting reference in their texts is to a snack from this period, which reminds me of bowls of sundal -- roasted peanuts eaten with a sprinkling of fresh coconut and sold commonly on the streets -- which I grab first thing on reaching Chennai.

Guava is called peru because that is where it comes from. Are there any other such fruits or vegetables that are still named after their place of origin?

Before these cheeses, we had little acquaintance with any cheese indigenous to India.

Could you throw light on how chilly got to India?

Chilly was something that was imported only a little over 450 years ago.

In India, it only made an appearance in Indian kitchens around 1542 in the Malabar region, thanks to foreign travellers or traders.

Although the chilly per se is an ancient crop, with accounts of it dating as far back as 7500 BC in South America (which predates the Indus Valley civilisation), it was only thousands of years later that it made it to India.

It came to Indians when Portuguese ferried with them ingredients like pineapple, corn, papaya, cashew nut, sweet potato, tomato, custard apple and sapodilla (chiku), which they had gotten acquainted with during their interactions in South and Central America. What's the story behind sambar?

While a Tamilian dish called pitlai -- made of tamarind, pepper and green gram dal -- existed, no other dish, matching sambar's etymology, can be traced in the literature of the region before this time.

It is believed that sambar came into being only when the Marathas began ruling in southern India, and was named after Sambhaji, Shivaji's eldest son.

Apparently, Sambhaji was an ardent cook and was fond of the Marathi dish aamti, which is a lentil-based stew soured with hints of kokum.

The story goes that one day, the regular stash of kokum did not reach the Tanjore palace's kitchen on time.

Instead of telling Sambhaji that aamti could not be made, the sous chef improvised by adding a dash of tamarind pulp, something the locals had been using for years for its tartness.

The dish became such a hit in the court kitchen that it was named sambar after Sambhaji, and from Tanjore it spread to other parts of South India.

You follow a diet similar to Mahatma Gandhi. It'll be interesting to know what you eat.

I said that as a joke in the book for how current and woke Gandhi's diet was.

While researching and writing the book, did your food choices/preferences change?

One thing that changed was that I fell in love with barley the moment I realised it was actually one of the first Indian grains.

I started taking our ancestral grain a bit more seriously. 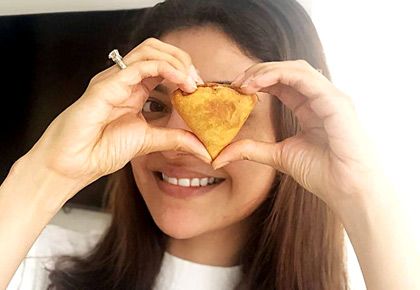 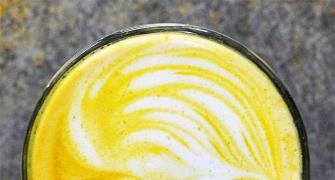 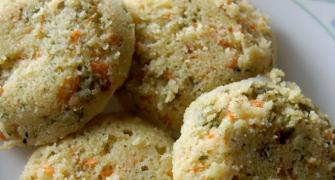 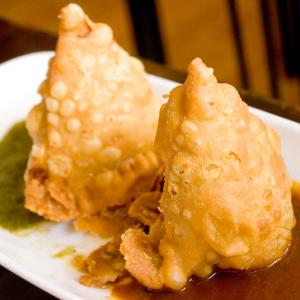