He's a celebrity fitness trainer and a triathlete.

She's a superstar's daughter who describes herself as an artist and heads a community-based, non-profit organisation whose aim is to draw attention to the importance of mental health and well-being and make it more accessible.

What began as a journey towards fitness in 2020 -- when he became her fitness trainer -- soon became a beautiful love story.

How did she respond?

Here's what Aamir Khan's middle child and only daughter says on her social media:
'Popeye: She said yes.
'Ira: Hehe. I said yes.'

And why is she talking about Popeye? Well, that's Nupur's Insta handle.

While Ira's account reflects her favourite things to do in life -- yes, it includes fitness -- it's impossible to scroll down Nupur's Instagram feed without getting an eyeful of his shirtless pics as he lifts weights in the gym, performs capoeira (it's a Brazilian art form that combines elements from martial arts, dance, acrobatics music and spirituality, explains Wikipedia) on the beach or flexes his muscles and flaunts his ripped abs.

Nupur inherits his sense of rhythm from his mother Pritam Shikhare, who is a Kathak dance teacher. A graduate from Mumbai's R A Podar College of Commerce and Economics, he's been a state-level tennis player as well.

This month, he participated in Ironman Emilia Romagna in Italy as Scott Sports India's new brand ambassador. That's where he proposed (external link) to Ira. 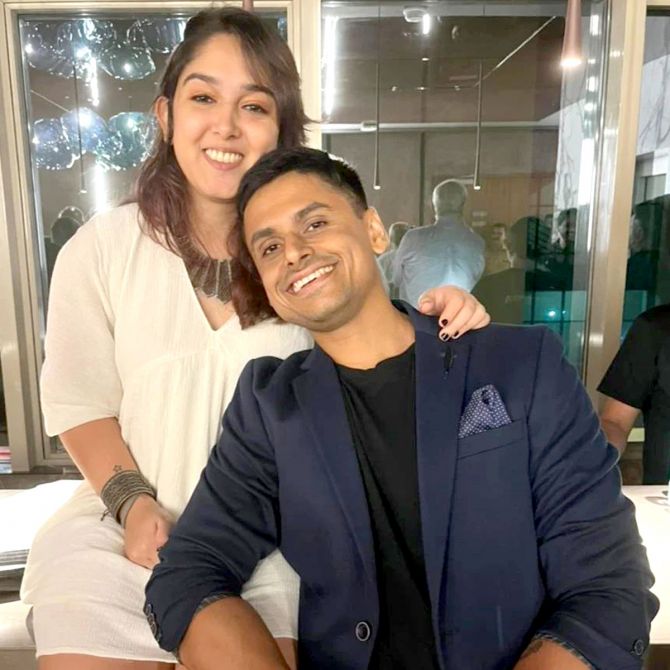 Ira and Nupur 'like to dress up and smile'.

Ira considers it an honour to 'make promises with and to' Nupur. 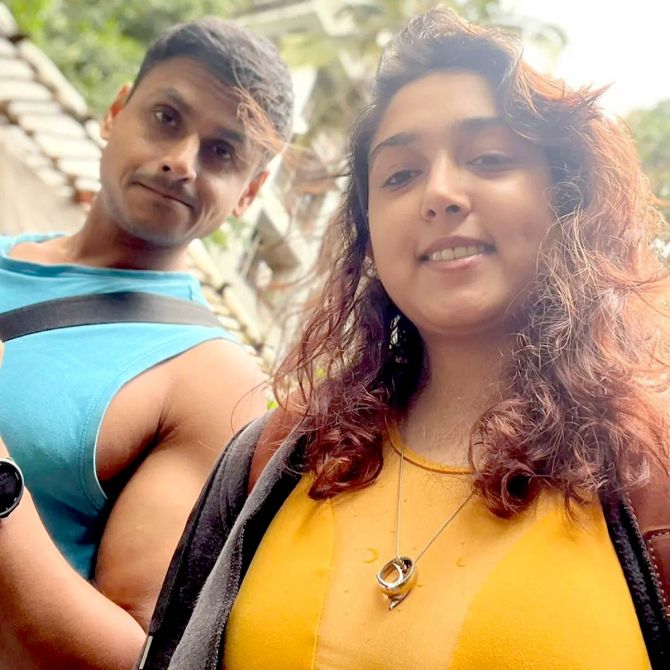 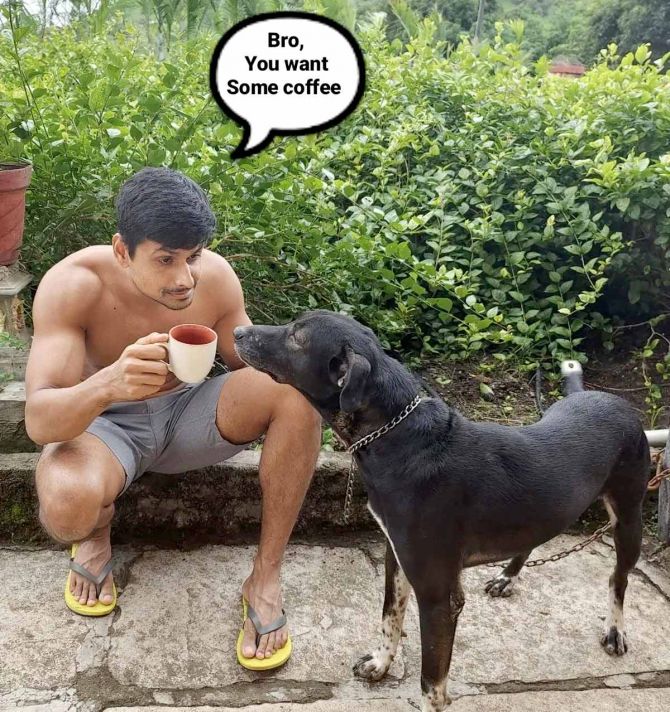 He makes good coffee; at least, that's what his pet Shambhu thinks. 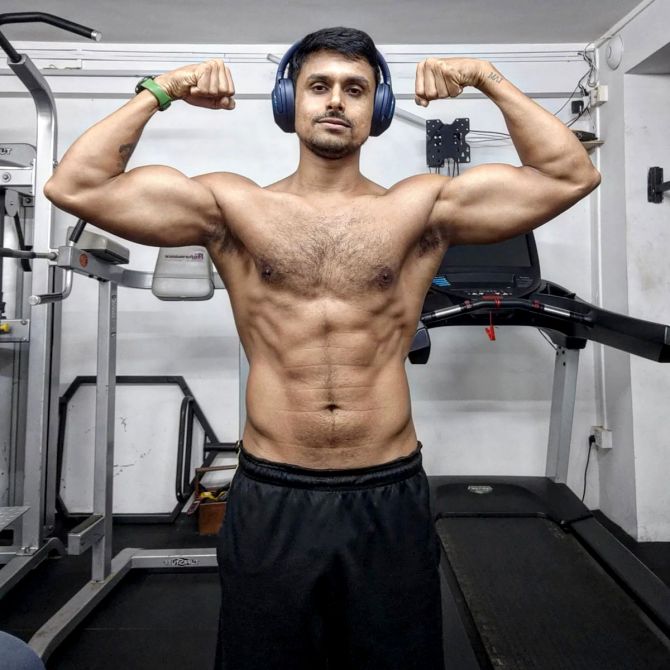 A tired face and a happy heart, says Nupur, are a great combination.

'Choose what weight you want to carry, and work on it,' he says. 'You don't have to carry the weight of the world on your shoulders.'

He has been training Sushmita Sen, who loves him for his indomitable spirit and joie de vivre.

'Her reason, season and a lifetime of happiness' -- that's what the former Miss Universe has to say about him. 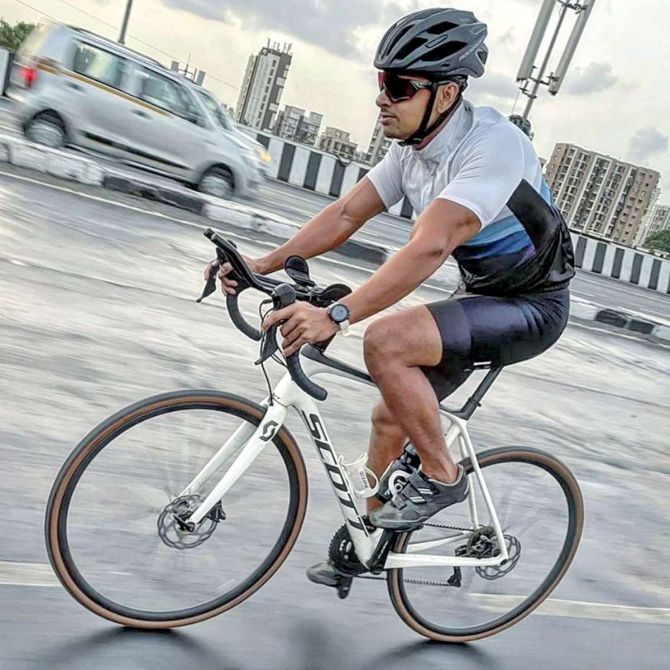 When in doubt, he pedals it out.

Nupur's motto: 'Be strong, hold your ground and no storm can shake you.' 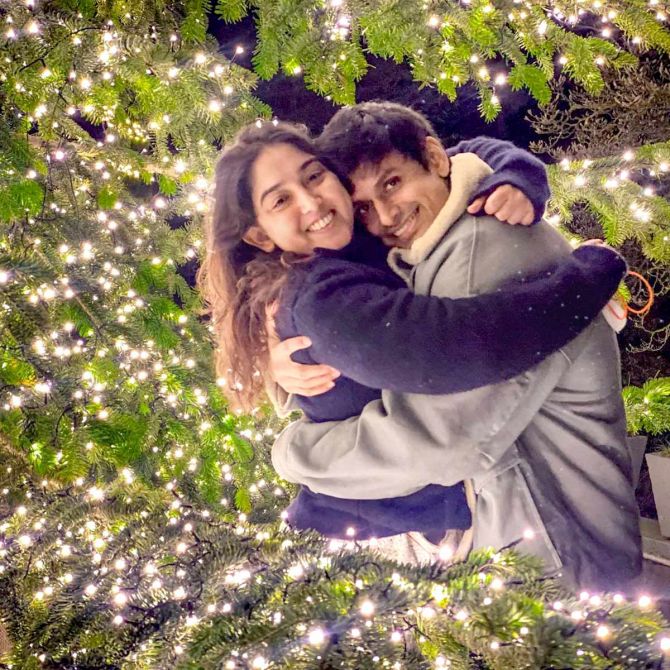 Always together! With his forever Valentine, girlfriend and now fiancee.

Ira, who wanted to try her hand at tattooing, inked her first design -- an anchor -- on Nupur's hand.

'Bucket list item #5,' she calls it as thanks Nupur for trusting her.
'Done.
'I JUST DID MY FIRST TATTOO!
ME.'

Wouldn't you want an anchor like that in your life? 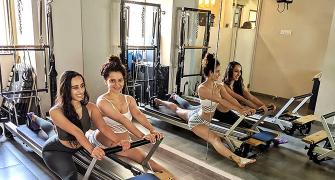 The fitness trainer who got Kangana to sweat it out 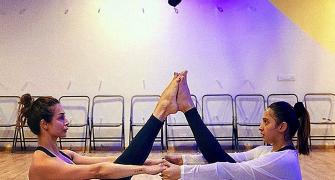 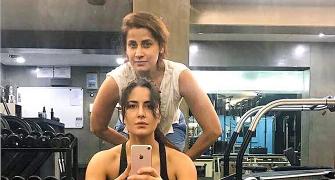 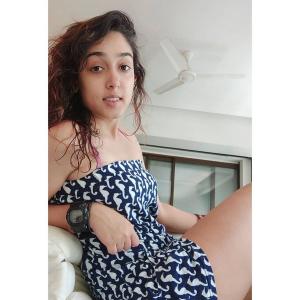 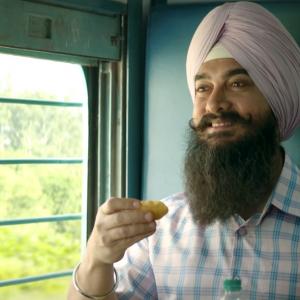