The OrcaPod is a prototype of what comes after boats, cars, trains and planes.
It's India's foray into what Tesla founder Elon Musk calls the 'fifth form of transportation' and India's only entry at the Hyperloop competition by Elon Musk's SpaceX.
Nikita Puri finds out how a team of students made it so far. IMAGE: The OrcaPod unveiled.
It was built by students from different parts of India at a makerspace in Bengaluru, after '1.5 years of research and design followed by 2.5 months of intense prototyping, manufacturing and coffee consumption.'
Lead photographs: Kind courtesy @teamhyperloopindia/Facebook and Bill Pugliano/Getty Images

At a do-it-yourself makerspace called Workbench Projects in Bengaluru, Anupama Gowda's days are packed with back-to-back meetings and telephone calls. A few days ago, Gowda, the co-founder of Workbench, received an unnerving call.

On the other end of the line was Sibesh Kar, a student at the Birla Institute of Technology & Science (BITS), Pilani, who has spent this past summer at Workbench.

Kar's call came when he was at Bengaluru airport, telling Gowda that "the shipping service has declined to send the pod".

Gowda immediately withdrew from her meetings and straightaway got back on the phone.

It was going to be a long weekend.

This "pod" they were talking about needed to be in California in the next few days.

The stakes of it not reaching in time were so high that they refused to acknowledge that was even a possibility.

The pod is a blue and white prototype of what comes after boats, cars, trains and planes.

It's India's foray into what billionaire inventor Elon Musk calls the 'fifth form of transportation'.

Named OrcaPod, owing to its likeness to the largest, toothed-whale of the dolphin family, in theory, this vessel is designed to reach up to "half the speed of sound". That's about 300 miles per hour.

The OrcaPod is the result of an open competition that Musk's aerospace company, SpaceX, announced in June 2015.

SpaceX invited students to build pods that could travel through a vacuum tube at supersonic speeds.

A truly ambitious project, such tunnel-tubes and pods could prove to be a viable public transportation system. Hyperloop, a mix of a 'Concorde and a railgun and an air hockey table,' as Musk describes it, is the next best thing to 'real teleportation'.

IMAGE: The OrcaPod is designed to reach up to "half the speed of sound". That's about 300 miles per hour.
Photograph: Kind courtesy @teamhyperloopindia/Facebook

Between August 25 and 27, student-driven teams from across the world tested their pods at the six-foot high and mile-long track built at Hawthorne, California.

Among the 24 teams that have made it this far are Keio Alpha from Tokyo's Keio University, Swissloop from ETH Zurich, Zurich and UMD Loop from the University of Maryland, Maryland.

The first of these competitions took place earlier this year, albeit without any participation from India.

This time round, a team led by Kar, and their OrcaPod, has qualified and made it to the venue just in time.

One of the largest pods in the competition (4x1x1m), OrcaPod is currently one-fourth of what it can be scaled up to.

New York to Washington in 29 minutes, Los Angeles to San Francisco in 36 minutes, and Delhi to Mumbai in 60 minutes -- estimations such as these are rife in every conversation and news report ever since Hyperloop has risen out of research papers and taken a more conceivable form.

Though ideas for futuristic transport can be traced back to American physicist Robert Goddard's designs for vactrain (very-high-speed rail transportation) in 1904, the world has found a renewed interest in it after Musk published a white paper in 2013.

(In this research paper, Musk urged entrepreneurs and engineers to take up the mantle for building Hyperloop. This call has been answered by a handful of companies, including Los Angeles-based Hyperloop One, which is also one of Hyperloop India's sponsors.)

As many on the team say, the "fun part" about this project was also perhaps the hardest bit: Research.

There's no handbook on Hyperloop or a dependable Google search to instruct you on building a pod that can travel up to 460 kmph.

"There's nothing that tells you 'this will work, this will fail'," says Kar.

"It's scary when you think of how you're representing the country in something that hasn't been done before," says Arjun Ashoka, the lone student on the team from St Xavier's, Mumbai.

"Besides, as students, none of us can actually comprehend the amount of money that has gone into this." 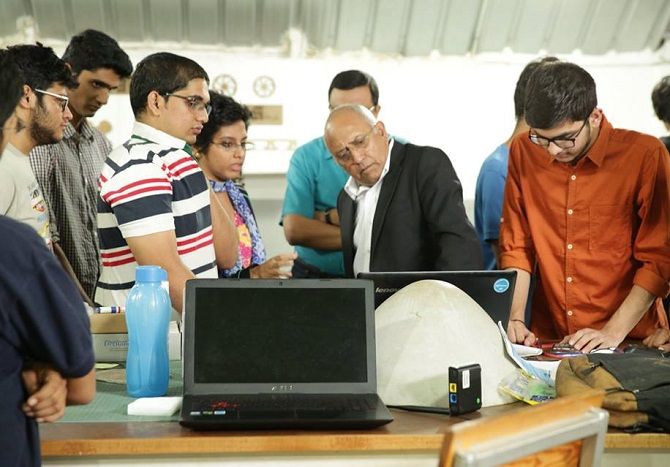 The project is estimated to have cost up to ₹90 lakh -- ₹36 lakh of this came from the team's crowdfunding campaign on Ketto.org, an online fundraising Web site; the rest flowed in through corporate sponsorship.

OrcaPod also saw industry partners lending a helping hand pro bono, like Starline Packers that swooped in at the last minute to help out with the packaging of the pod as it waited at Bengaluru airport after the previous arrangement fell flat.

Similarly, if Harish Palani, managing director at Ripple Technologies, had charged for his engineering and manufacturing services, he could have billed the team anywhere between ₹18 lakh and ₹25 lakh. He charged them nothing.

"These young minds should know that they have support to do what they want in this country," says Palani.

"Besides, these guys would work till late in the night, then turn up early morning the next day. I'm hoping my engineers would have learnt something after seeing this kind of passion," he adds, laughing.

Jitendra Davda, director of Miracle Electronic Devices, an exporter of transformers and cable harnesses, was already sold on the idea of Hyperloop.

So, when he received a proposal from the India team about helping it put its electric and electronic systems in place, Davda became its technical mentor.

Such students are the answer to the "large gap" that exists between what educational institutes teach and what the industry really wants, he feels.

But not everyone was as welcoming as Davda or Palani.

Many had their doubts about Hyperloop India because all they saw was a bunch of students with an idea.

No one, not even some on the team, had thought that they'd get this far.

These doubts continued up until the pod actually began taking shape.

Though they had a design approved by SpaceX, all that they really had was a 250-page document of a highly unorthodox idea.

Not even a prototype of such a grandiose experiment existed in the past.

"Those we had approached for financial support earlier came on board when we actually started building the pod," says Prithvi Sankar, a BITS student and business development lead of the project.

In quest of an ecosystem where this fledgling of a concept could survive, the team sent out feelers all around. Bengaluru was most receptive to something as exploratory as Hyperloop, recalls Sankar.

One of their first inroads into this supportive ecosystem was gathering at Gowda's Workbench Projects. 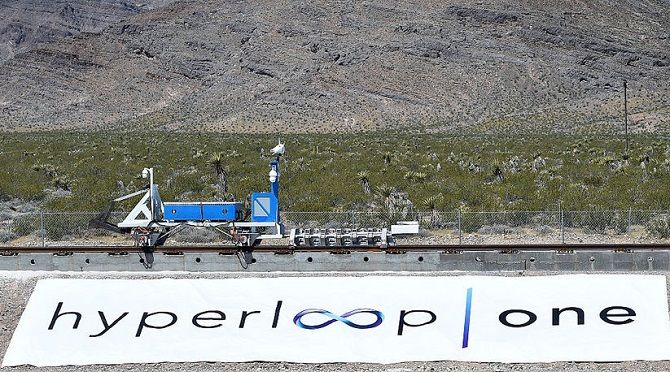 IMAGE: A recovery vehicle moves a test sled down a track after the first test of the propulsion system at the Hyperloop One Test and Safety site in Nevada in May 2016.
The company plans to create a fully operational Hyperloop system by 2020.
Photograph: David Becker/Getty Images

Here, a little away from 3D printers and tools for woodwork is five-year-old Darren, still in his uniform after school hours.

As he waits for his father to finish up a do-it-yourself wood polishing project, Darren is trying to fix his own electric toy car.

"See, these wires have come out. The wheel is also not moving. I have to fix this," he says.

It's only coincidental that OrcaPod's designs first began to take shape at Workbench, which is located under the Halasuru Metro Station.

The metro, after all, will seem like a relic of the past, like trams, once the futuristic Hyperloop comes into play, perhaps by the time Darren's generation comes of age.

Sitting here, Gowda recalls how these students have come really a long way: From working on a paper to actually facing the hardship of hardware far from the cocooned life colleges offer.

Over 60 students have worked on this.

The team in itself has dramatically changed since inception.

When Kar first applied for the competition, there were only five of them.

After their design was approved and shortlisted among 120 applicants last year, they needed a larger team to ensure that they had in-depth knowledge of the different sub-systems that this pod would require.

Like an organism seeking out the best for survival, the team expanded its search for candidates beyond the three BITS Pilani campuses, and announced a pan-India recruitment drive for the project.

With students from colleges such as the National Institute of Design, Indian Institute of Management, Ahmedabad, RV Institutions, Indian School of Business and more, the project left behind the avatar it was born in.

It was no longer BITS Hyperloop, but instead, Hyperloop India.

Many bowed out on the way here.

In fact, Kar is the only one from the team that kickstarted this dream.

"It's understandable. Even small start-ups offer remuneration or stock options; I didn't have anything to offer them," he says. It's become worth the commitment to those who've stayed on.

Irrespective of what happens in California, these students have become part of a historic milestone, and have gone where no Indian has gone before.

They've worked for the ringside seat to see the future of transportation.

(In India, NITI Aayog has cleared six proposals for high-tech transport, and this includes Hyperloop. The government has been approached by companies to explore Hyperloop possibilities, but nothing concrete has materialised yet.)

Before India's OrcaPod runs on the track in California, it'll have to pass through a rigorous battery of tests that range from inspections to check the structural integrity of the pod to a vacuum chamber examination.

In the first competition, only three out of 27 teams qualified to try out the track. As the tests for the second competition began, it was comforting to know that OrcaPod has already had a taste of the vacuum chamber at Hindustan Aeronautics Limited's facility.

Musk has made it clear that his sci-fi dream is to build tunnels for Hyperloop along America's Eastern seaboard.

He recently tweeted he had 'received verbal govt approval' for this.

The 'prize' for the competition remains undisclosed.

Even if non-Americans win the competition, they aren't eligible to work with SpaceX owing to US government regulations.

"For us this is about validating our proof of concept," says Sankar.

The opportunity of trying out SpaceX's track really translates into "a platform to get started with something new," adds Kar.

"You win a competition, you lose a competition, it doesn't really matter that much. But it's useless if you don't do something that adds value," he asserts.

Besides, the team feels working for this competition has helped it lay the groundwork for a research and development centre to help with India's Hyperloop dreams.

The first time the competition happened, the criteria included scalability as well as speed. This time it's about speed alone.

"But the fastest pod may not necessarily mean that it can be scaled up for mass transport, and that's something we'd really like to work on," says Kar.

While some teams are considering the air propulsion method to get their pods moving, others are using jet engines. Hyperloop India is experimenting with linear electric motors for propulsion.

It'll take decades before Hyperloop can actually revolutionise mass transport, but Kar's team has ensured greater hope for the time when Darren's generation grows up.

For now, India's dreams continue to be propelled by the fins of an Orca. 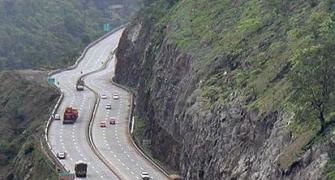 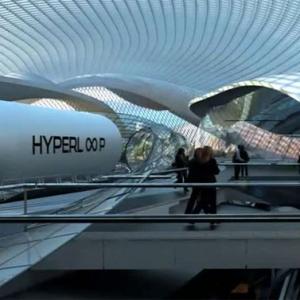 SpaceX may test-run its supersonic train in Pune