'If we follow the advice of the AYUSH ministry 100 per cent, then the next generation will be stunted.'
Illustration: Dominic Xavier/Rediff.com 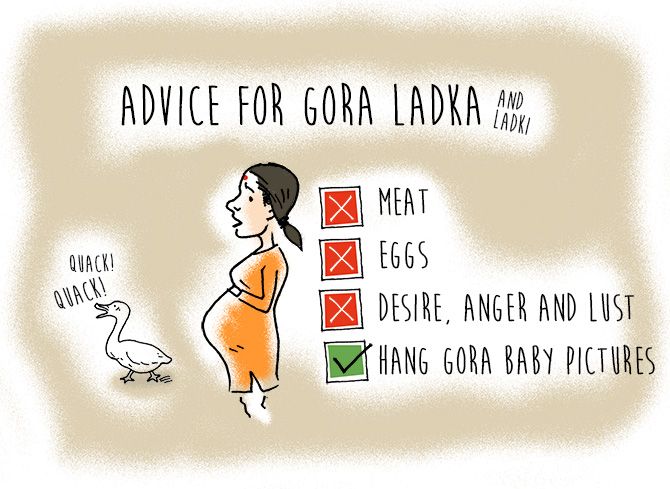 The AYUSH ministry recently distributed a booklet called Mother and Child Care that recommends what an expectant mother should or should not do to have a healthy baby.

Dr Arun Gadre, a Pune-based gynaecologist and member of the Alliance of Doctors for Ethical Healthcare, speaks to Veenu Sandhu about the damage these recommendations can do, more so because they appear to have the government's backing.

The booklet says pregnant women should not consume meat or eggs. How scientific is this advice?

What is going on is absurd. That is the only way to describe it.

It is the most unscientific statement and coming from a government authority, it is even more curious.

What does the government want to convey?

I am a gynaecologist and have worked in rural India for 20 years.

One of the biggest problems I encounter is malnourishment in pregnant women.

My entire life I have been giving this message that women should have a diet rich in protein and iron.

An absolutely wrong and dangerous signal is being sent to the community.

The government should think twice before giving such messages.

Eggs, like milk, are a rich source of protein and poor women in any case do not have access to them.

For vegetarians, the only rich source of protein is daal, and it is very costly.

Besides, to meet the protein requirement of a pregnant woman, the daal has to be very thick.

Those who can afford eggs and meat should consume them because these are a rich source of protein and vitamins.

What about the advice to hang 'beautiful' pictures on the walls?

This nonsense is coming from what is called garbh sanskar (education in the womb).

In this category, Ayurveda offers a lot of advice.

For example, a lot of statements in Ayurveda are about how to bear a male child. That is being taught till today in Ayurveda.

Under the Pre-Conception and Pre-Natal Diagnostic Techniques (PCPNDT) Act, this is a criminal portion.

Not only are such teachings unfounded and unscientific, they also violate the PCPNDT Act.

They should be banned and removed from textbooks.

Not only is the government not doing so, it is, on the contrary, promoting this nonsense about garbh sanskar.

It is a fire that is being promoted. I have seen people becoming obsessive over it.

Can you picture a pregnant woman sticking a tape recorder to her abdomen so that the baby in the womb can listen to the mantras being chanted?

This woman was not willing to have the tape recorder removed even when she had to undergo a cesarean.

Her argument was that according to garbh sanskar, she had to make the baby listen to the mantras till it was born.

Such is the hysteria.

As a member of the Alliance of Doctors for Ethical Healthcare and a gynaecologist, I denounce these recommendations.

I have seen women getting depressed and psychotic when the pregnancy does not turn out the way it has been promised in these methods.

One such pregnant woman unfortunately lost the baby in the eight month. This happens sometimes, without any reason.

It is an accident. We had to remove the dead foetus from her body. But the woman simply would not accept what had happened.

She kept saying, 'How is it possible when I was following garbh sanskar?'

This has all become a bazaar, a big market. You can use it to promote whatever myth you want to.

The Garbh Vigyan Anusandhan Kendra, a Jamnagar-based organisation, said couples can conceive the 'best progeny' by having sex on auspicious days and abstinence after conception.

Yes, it said couples can have a gora (fair) baby -- a gora ladka (fair boy) at that.

They are only playing with the emotions and perceptions of people.

We are turning the clock back.

As it is the battle is very difficult and uneven, given all the prejudices and unscientific rituals that exist.

And now the government is also promoting these things.

What is the motive?

I don't know what the motivation is. Perhaps glorification of the past is one motivation -- the belief that we were a great civilisation and should once again become so.

I am not against it. We were much ahead in many things in the past -- like we discovered the shunya (zero).

Whatever is scientifically correct should be glorified, but we are also glorifying things that aren't.

Besides malnourished pregnant women, I am also concerned about the babies that will be born with intrauterine growth retardation that can result because of malnourishment.

As it is, some 30 to 33 per cent of the babies in India are stunted and have a birth weight of less than 2 kg. Rather

than taking the responsibility of providing a nutritious, high calorie, high protein diet to pregnant women, the government is giving irrational and unscientific advice.

If we follow the advice of the AYUSH ministry 100 per cent, then the next generation will be stunted. 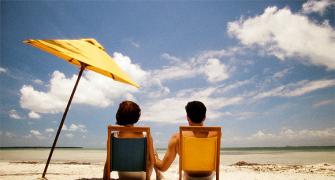 10 things to do before getting pregnant 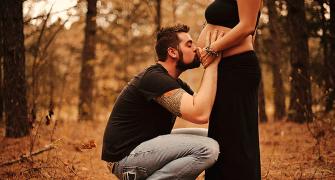 Tips to keep the sparks flying during pregnancy 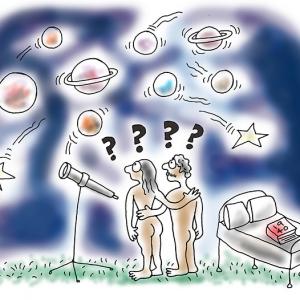