Dhiraj Dolwani is stemming the tide of migration to cities and ushering in social change in Uttarakhand in the process, writes Anjuli Bhargava. 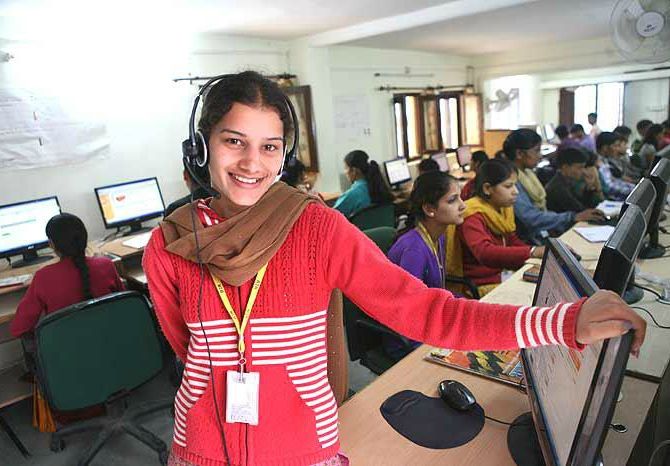 Inside a B2R office.
All photographs: Courtesy B2R Technologies/Facebook.

But what does one call someone who disrupts the way of life for a large population? Who puts new aspirations and thoughts into the minds of the young? Who changes the power equation within the family? Or who rocks the boat, so to say?

In this case, one calls him Dhiraj Dolwani. 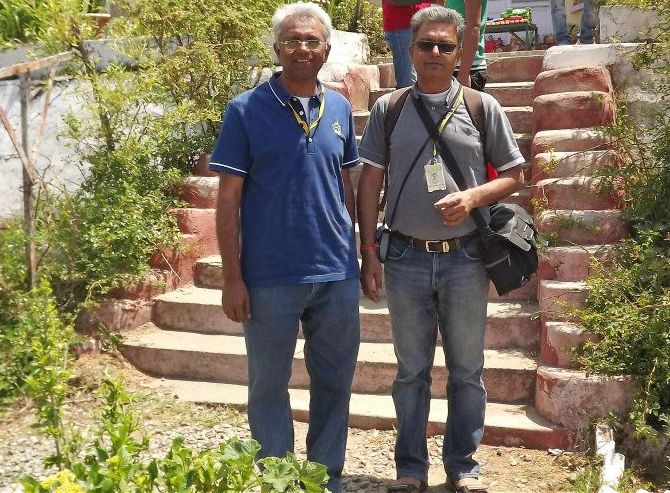 Dhiraj Dolwani (right) and his former colleague and co-founder R Venkatesh Iyer (left) used their personal savings and funds from angel investors to start the first centre of B2R in Orakhan, Uttarakhand, with 20-odd employees.

In 2008, Dolwani, an M-tech from BITS-Pilani, decided to quit a career that spanned the information technology (IT) and business process outsourcing (BPO) sectors to set up his own company, B2R.

An avid trekker, it always troubled Dolwani when he heard the youth in the hills question why they needed to educate themselves when they had no opportunity to use the education. No jobs, no prospects and nothing to look forward to except migrating to the cities and living a wretched life.

"I saw so many things broken and began to ask what I was going to do about it," he says.

By September 2009, Dolwani and his former colleague and co-founder, R Venkatesh Iyer, used their personal savings and funds from angel investors to start the first centre of B2R in Orakhan, Uttarakhand, with 20-odd employees.

The company got its first round of funding in February 2010 and growth post this was rapid.

In two years, B2R set up four centres, doing back-end work for clients from across the world and employing close to 150 people (half of them being young girls). 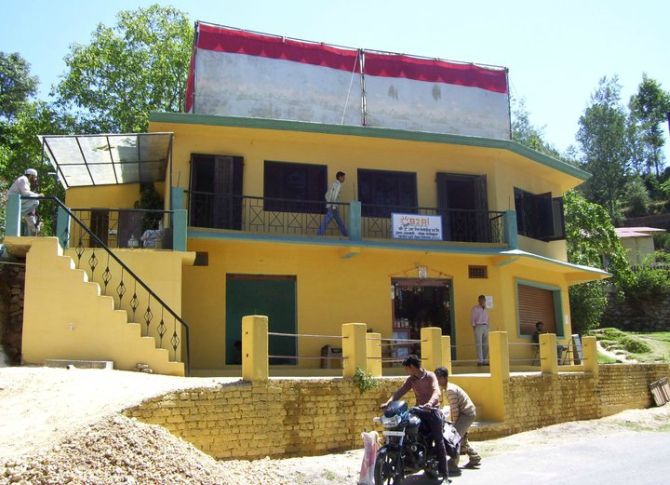 The first B2R office. As the number of locals who were employed in the BPO rose, so did the disruption B2R was creating in the community.

As the number of locals who were employed in the BPO rose, so did the disruption B2R was creating in the community.

The young, especially girls, were not going to the cities to find a job, but working in an office environment close to their homes -- changing the gender equations and long-established traditions in the community.

Local women in their early 20s started working for the first time ever and became important earning members of their families. In some cases, they were the only earning members.

"The change is bigger than it appears. As an economic contributor, these girls began to have a greater say in household matters," says Pankaj Wadhwa, founder of Himjoli, a social venture that works with producers of organic products in Uttarakhand.

Wadhwa has followed B2R's journey closely and acts like a mentor and guide to the business.

In a region where annual income of a family can be as low as ₹6,000, a monthly salary of this magnitude is like a "mini-fortune", he adds.

At a typical centre of B2R, girls and boys work together, sitting next to each other and chatting freely -- something that is alien to the culture of the region.

After a few months into the job, the confidence that these girls acquire shows in their attire. "Jeans and other western clothing becomes the norm; the aspirations of the people working at our centres and their way of thinking change," says Dolwani.

In the beginning, local girls would sit at the edge of their chairs, refusing to make eye contact with anyone, he says. But within weeks of training and being at work, they are transformed into confident young women, who can be seen chatting and laughing with seniors and colleagues, adds Dolwani. 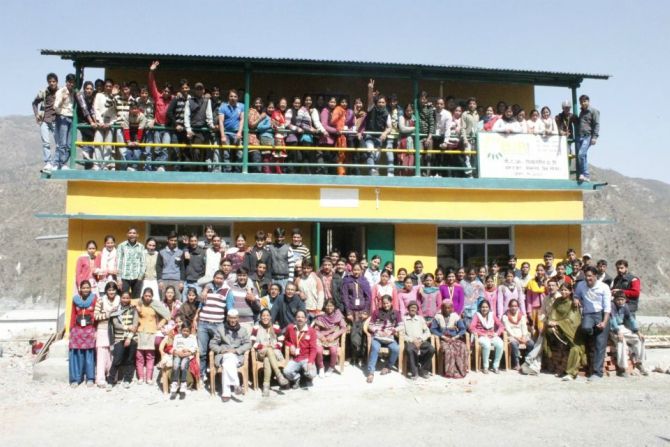 B2R Teams from the first three centers meet for inauguration of center four in Simalkha village in Nainital, Uttarakhand.
B2R set up four centres in two years, doing back-end work for clients from across the world and employing close to 150 people (half of them being young girls).

In 2013, B2R was looking to expand further when its second round of funding ran into trouble.

It had by then six centres and 335 employees, but the returns were not to the liking of investors. "This is a business where you burn before you earn, and the business needed far more patient capital than the investors were willing to give," explains Dolwani.

The financial crisis in 2013 coincided with a personal one for Dolwani when he was diagnosed with a serious illness and hospitalised for a few months. At one point, Dolwani felt it may be the end of the road for B2R; his illness and the investors pulling the carpet seemed like a bolt from the blue.

But the employees of B2R were in no mood to see the business fold up.

They agreed to take salary cuts as the alternative of leaving their homes and moving to bigger cities in search of jobs was not an attractive one for most.

The company downsized, reduced its monthly outgo and started focusing more on customers rather than investors.

Within two years, by 2015, B2R reached an operational break even, and in 2017, it expects to make a modest profit.

More than the financial rewards, the fringe benefits of B2R's journey are what gladdens the hearts of its promoters -- these youngsters who would otherwise have headed to cities are earning and contributing within their own environments. Recognition and success are trickling in for Dolwani and B2R. The company has helped set up similar centres in Yucatan, Mexico, at the request of the province's governor.

Recognition is slowly trickling in.

Having studied B2R's journey from a distance, the governor of Yucatan in Southeastern Mexico has reached out to B2R to help set up similar centres in their province. As a result, five locals from B2R's Uttarakhand centres have been to Mexico to train people, none of whom had visited even Delhi prior to this.

For the girls working at B2R, there is another big upside: not only are they getting married later than they would have otherwise, they are even choosing who to marry -- something largely unheard of in the region.

One of B2R's successful love stories is of Deepak and Deepa. They met at the BPO in 2009, fell in love, rose through the ranks to become supervisors -- before moving on to newer assignments -- and recently got married.

"Marriages clearly are not always made in heaven; some are made at B2R," Dolwani adds in jest. 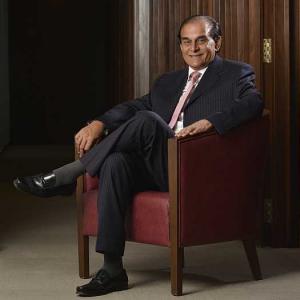