How this dance crew did India proud

Mumbai-based V Unbeatable has clinched the golden buzzer at the reality show America's Got Talent 2019. 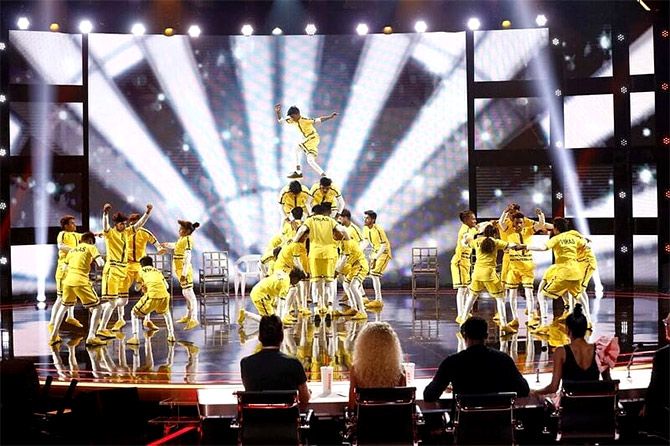 Indian dance crew V Unbeatable has just hit the bulls eye by swaying away the golden buzzer at the reality show America's Got Talent 2019, making India proud on an international platform.

The dance group presented a breath-taking act that fused dangerous acrobatics with dance, set to an upbeat song from the Ranveer Singh-starrer Ram-Leela.

V Unbeatable, who also received standing ovation from the judges wore yellow-colour tees with 'Vikas' imprinted on it, in honour of their late friend, who passed away during rehearsal sessions six-years ago. (Read their inspiring story on Rediff.com!)

"Six years ago, we were doing rehearsals and suddenly the incident happened. He fell down and his body was paralyzed. After a few weeks he passed away," one of the dancers explained to the panel of judges before their performance.

He further explained that Vikas had dreamt of performing on a prestigious platform like America's Got Talent, so the 29 dancers were doing it for him. IMAGE: A crew member from V Unbeatable performs at the show.

One of the guest judges, Dwyane Wade, was gobsmacked by their spectacular performance.

"My heart is beating at a rapid pace that I haven't felt before," Wade said.

"As a former athlete, I know the practice time it takes, I know the sacrifice it takes. Whenever I hit a game-winner, whenever it was one of those moments, I jumped up on the stand and said 'This is my house'. And today, on this stage, this is y'all house," added the former NBA player before hitting the golden buzzer, which sent the group straight through to the live shows in Hollywood. TELL US: Which is your favourite dance group? Share your choices in the messageboard below.