'The lush green of Kashmir was exactly like the postcards and posters I had seen growing up.' 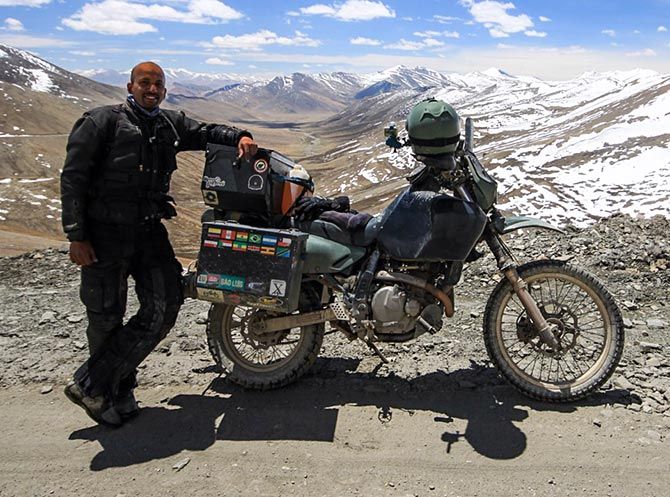 Jay Kannaiyan, a software engineer by profession and adventurer by passion, traveled on a 1,000-day motorcycle ride from Chicago to Delhi.

A fascinating excerpt from Jay's account of that monumental journey, Riding Towards Me: A Thousand-Day Journey On A Motorcycle:

One must consider that this old city sits on the Silk Route, and many others over the centuries must have felt the same as I did upon entering Leh.

The streets were bustling with activity. 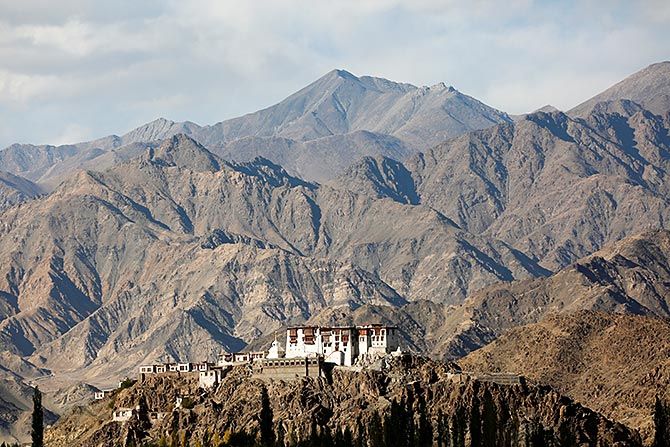 We rode past the old town to Changspa for a hotel on the hilltop that had a grand view of the snow-capped mountains that we had just crossed.

The Manali-Leh Highway is one of the most incredible rides on the planet and its popularity is well deserved.

Taxing, inspiring and, at times, punishing, there aren't too many routes that offer such a vista of snow-capped peaks combined with constantly shifting off-road challenges.

It had been a privilege for me to surmount it, and in such good company too. 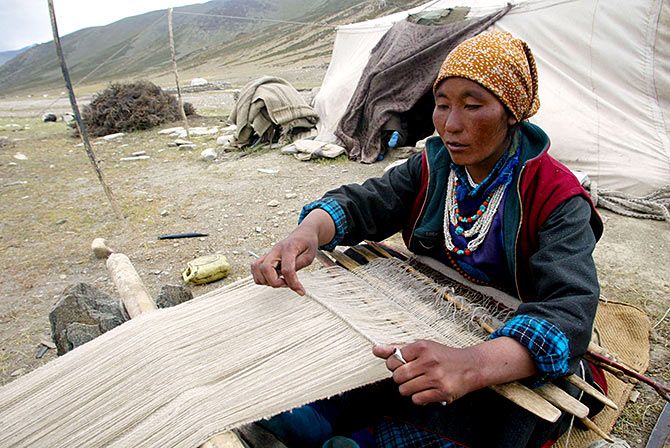 Leh lies on the northern banks of the Indus river ringed with snow-capped mountains.

It has a thousand years of history to its name and was founded in the tenth century as a key staging post on the Silk Route.

Pashmina and cashmere wool were still being hawked on the streets alongside the now ubiquitous smartphones.

This hive of activity made the most of these short summer months.

A local man named Sonam gave us a ride in a Maruti 800 hatchback, the stalwart of the Indian automobile industry, after we got lost during a walk to town.

He told us that he preferred the winters when the town more or less closes down due to the extreme weather, because that's when every family just socialises to pass the months.

I could see the appeal in that, but had no real interest in spending an eight-month-long winter there from September to May, with most of my time spent freezing. 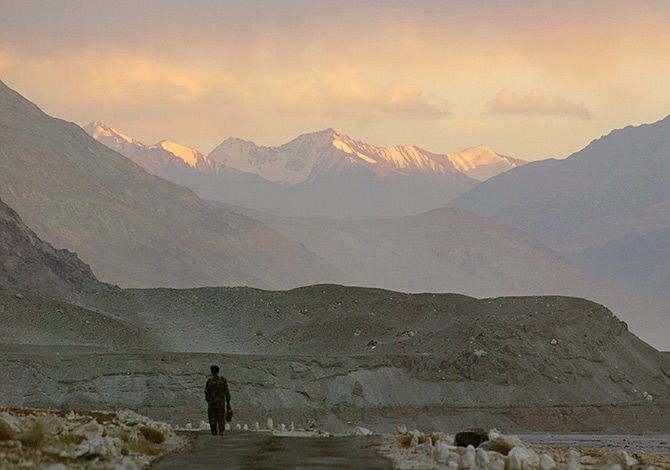 I decided to visit Khardung La which is said to be the highest motorable road in the world.

We set off from Leh and the steep climb catapulted us out of town.

The route snaked up one huge mountain with each hairpin bend elevating us higher and higher.

The road was tarred for 24 km (15 miles) up to the checkpoint at south Pullu.

Reverting to gravel, the road got very rough with bumps, mud and glacier stream crossings for the final haul up to the pass 15 km (9 miles) ahead.

Traffic was also pretty heavy as most people who visit Leh make the same trip. 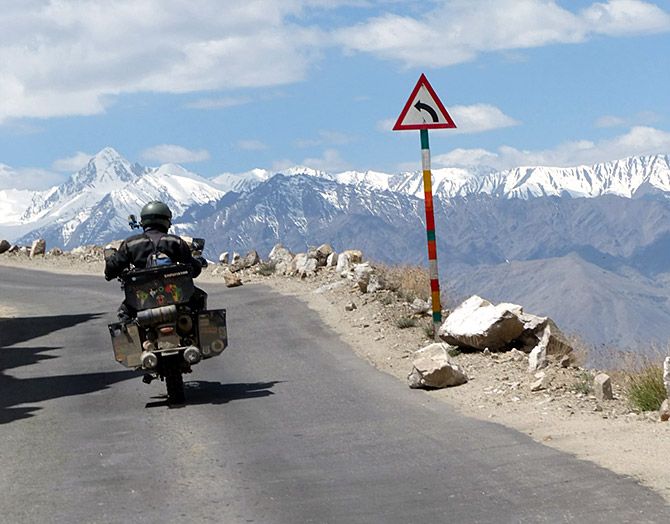 For India, Khardung La is of national importance as it is the only supply route to the Siachen Glacier and the army camps there.

India and Pakistan went to war over this glacier and its tributaries in 1984. IMAGE: Indian soldiers at the base camp after coming back from training at the Siachen Glacier, October 4, 2003. Photograph: Pawel Kopczynski/Reuters

Stopped by some BRO road construction for almost an hour, the traffic was finally let through in a long burst onto Khardung La.

I'm not sure how the BRO get their altitude readings, but their claim of Khardung La being at an elevation of 5,600 m (18,375 ft) is off by a large margin.

My GPS, calibrated to satellites overhead, told me we were actually at 5,378 m (17,646 ft), which was still the highest I had been on this journey. 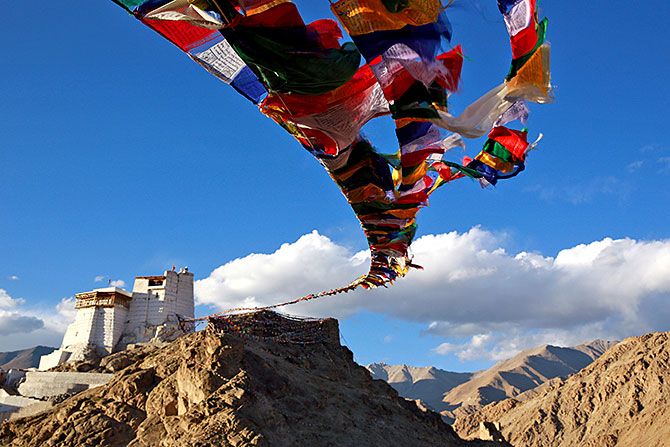 There were Tibetan prayer flags at the pass, just like at all the other passes in Ladakh.

I bought my own set in Leh and let it fly in the wind at Khardung La.

I wish I could've spent more time in Leh, but I had to get back on the road.

National Highway 1 took me along the roaring Indus and towards Kashmir. 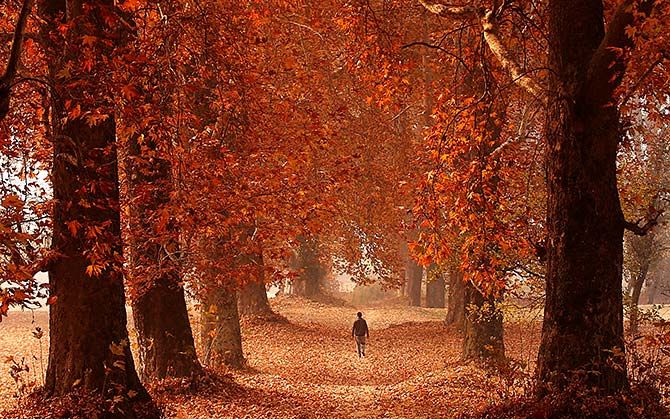 I could only imagine what it must be like at the end of summer with the full force of melting snow. 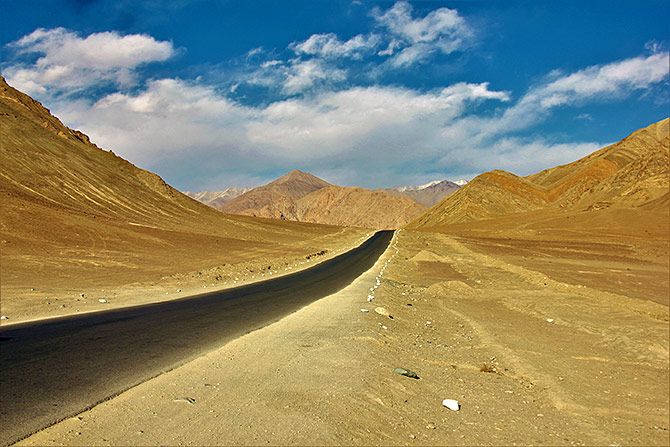 A few kilometres out of Leh, there's an odd place called Magnetic Hill.

It is said that if you park your car in the designated spot and leave it in neutral, it will move uphill due to the way the magnetic field is aligned at that point.

Of course, it wouldn't have worked on a motorcycle.

After some time, the landscape changed dramatically, resembling the surface of the moon with bleach-white rocks tumbled all over the valley. 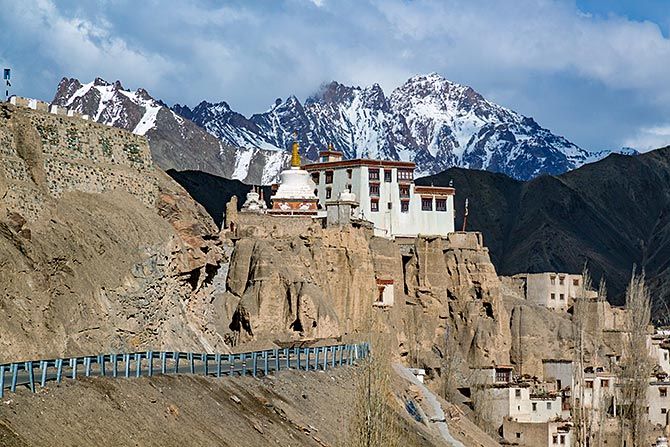 Then came Lamayuru, a Tibetan Buddhist monastery said to be a thousand years old.

Framed with enigmatic snow peaks all around, it was a handsome stone and mud brick structure perched on top of a hill.

I crossed two more passes, Fotu La and Namika La, but after the Manali-Leh Highway, these seemed like hills. 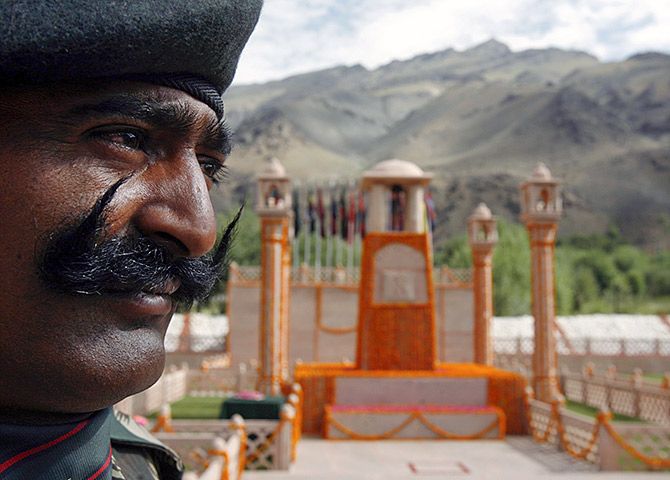 And then it was down into Kargil, the northernmost point of my trip around India.

It was near Kargil in 1999 that India and Pakistan fought their last war.

After reading so much about it and seeing those events transpire in the news just when I was leaving India, it was wonderful to see that Kargil was just a regular old mountain town now.

Traffic was busy, street vendors were selling all sorts of items and fresh bread was being baked.

It was a town that was quite different from the image created by the war.

I left Kargil early the next morning and headed towards Srinagar.

I had been warned that the route could be rough and unpredictable.

It was a bright and beautiful morning, but one that I could not enjoy because I was focused on safely navigating past the long army convoys that regularly traverse that route. 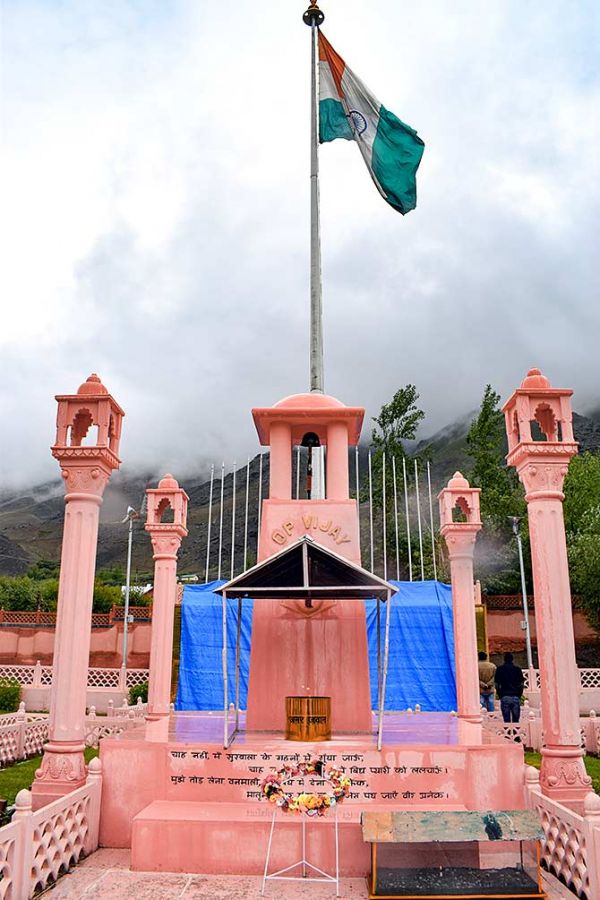 These roads were principally for military use, which is why many routes had restrictions for civilians, and stricter ones for foreigners.

A little ways out of Kargil, I came up to Drass and the Kargil War Memorial.

There was a museum on the site showcasing photos from the war and the troubles the Indian Army went through in securing victory.

I paid my respects and continued on my way. The route slowly climbed up to Zoji La, the last pass of my trip.

It was quite the dramatic gateway separating Ladakh's dry desert airs to the lush green of Kashmir, which I was pleased to see was exactly like the postcards and posters I had seen growing up. 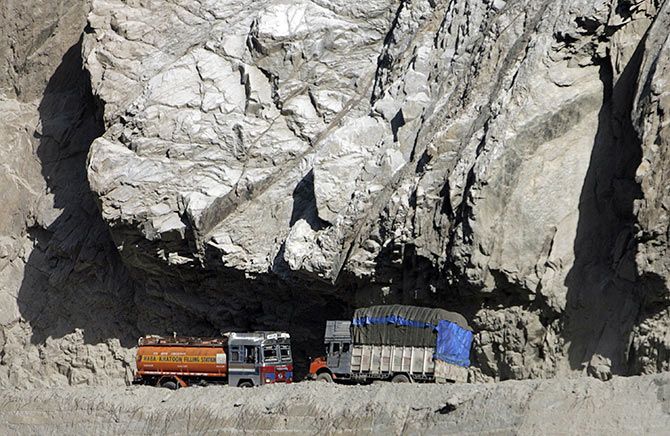 The road from Srinagar to Jammu the next day was very hectic being packed full of tourist, freight and army vehicles.

The scenery was enjoyable at times, but with so much effort required to navigate the traffic, I could only steal the occasional glance at the freshly prepared fields of paddy, which denoted the transition from upland to lowland communities. 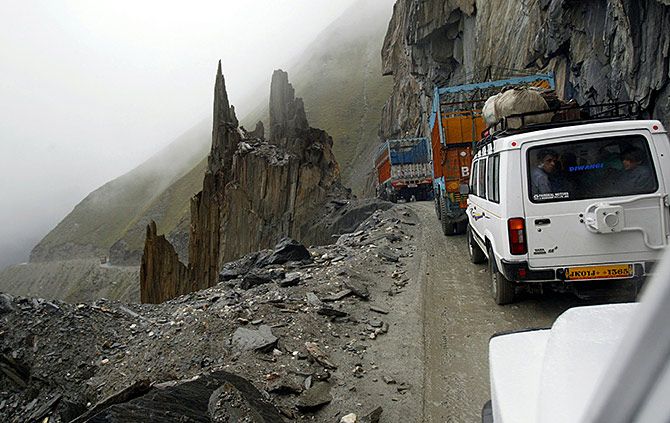 While I stopped by some fields to take a break, a soldier emerged out of the nearby woods.

It was a reminder of the ever-present military presence in Kashmir.

I asked if it was okay for me to be there and he said that it was.

I got chatting with him and it turned out he was from Kerala and was pleased to meet a fellow south Indian. 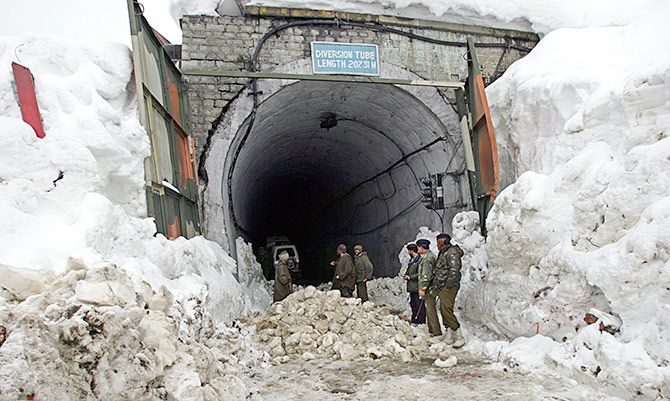 After the flat farmland near Srinagar, the road climbed up and over two small mountains, passing through the 2.5 km long Jawahar Tunnel, which was built in the 1950s.

It was the first tunnel in the world that was drilled simultaneously from both sides to meet perfectly in the middle. 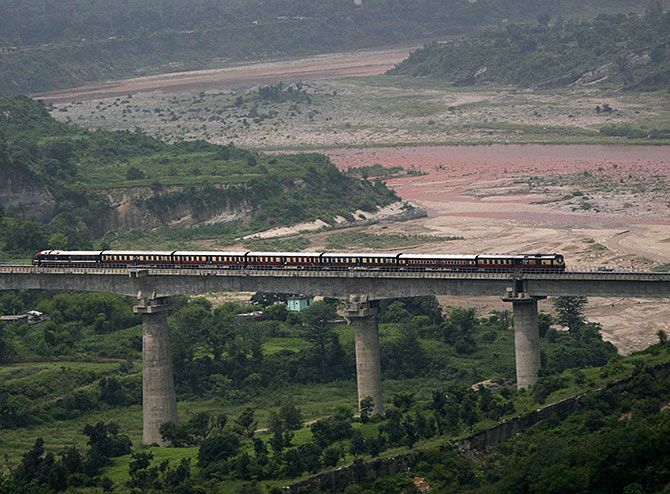 IMAGE: A passenger train from Udhampur moves over a bridge in Bazalata on the outskirts of Jammu, August 5, 2011. Photograph: Mukesh Gupta/Reuters

When I reached Udhampur a few hours from Srinagar, I was greeted by wide tree-lined boulevards of an Indian Army bastion.

Being close to the foothills, this was the primary barrack for all army operations in the mountains.

Luckily, with an introduction from a rider of the Madras Bulls motorcycling club, I was welcomed as a VIP at the 4th Battalion of the Madras Regiment, the oldest in the Indian Army, dating all the way back to the 1750s.

I rode through the white gates of the base knowing that ordinary citizens would not be welcome without special permission.

Major Karoop, moustached and fit, welcomed me by firmly grabbing my shoulders.

He was proud to learn that an Indian, and that too a boy from Madras, had undertaken such a journey. 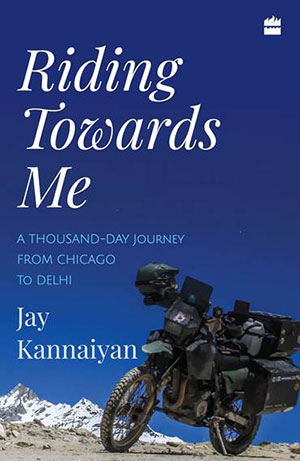 Excerpted from Riding Towards Me: A Thousand-Day Journey On A Motorcycle, by Jay Kannaiyan, with the kind permission of the publishers, HarperCollins India. 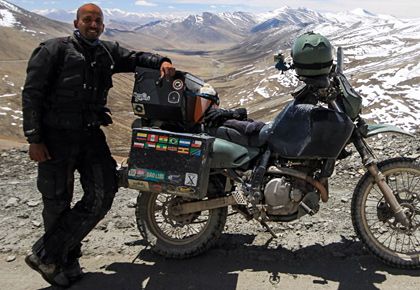 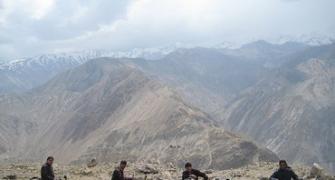 Motorcycle Diaries: Arctic to the Andes: A 15,000-km ride 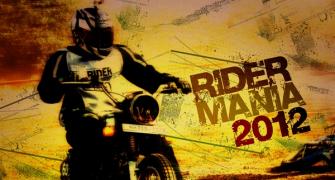 Motorcycle Diaries: Riding to Goa on an Enfield 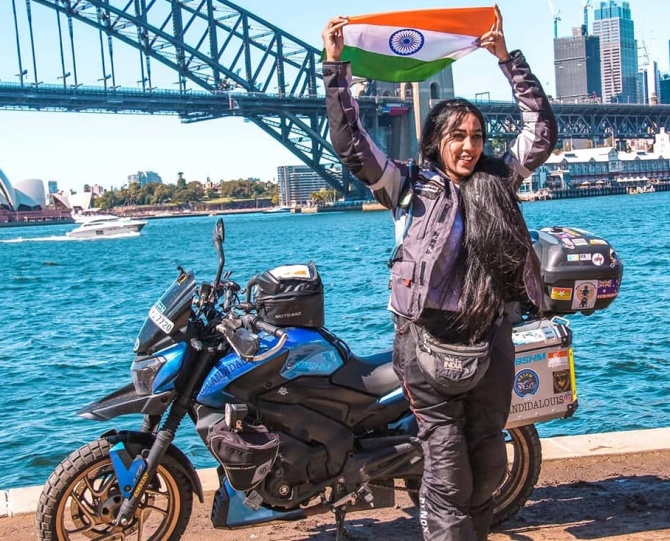 Of passionate riders and a motorcycling career