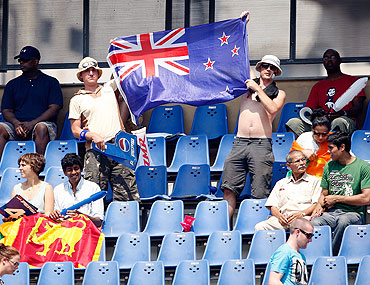 Image: Supporters of New Zealand hold up a flag during the match between New Zealand and Sri Lanka at the Wankhede Stadium on Friday
Photographs: Getty Images

India may not be playing any league match at the Wankhede Stadium but that did not deterred Mumbaikars from coming out in large numbers to witness the high-profile Group A clash between Sri Lanka and New Zealand in Mumbai on Friday.

Over 23,000 spectators turned out at the 31,000 seating capacity Wankhede Stadium for the Sri Lanka- New Zealand and encounter, thereby erasing any apprehensions about low spectator turnout for non-India games.

With no scope for being partisan or biased, the highly vocal crowd applauded and appreciated every aspect of the game -- batting, bowling or fielding, a boundary or a wicket.

In fact, one of the biggest cheers of the day was reserved for Sri Lankan speedster Lasith Malinga, who represents the local Mumbai Indians in the Indian Premier League.

The stadium, which was about 75 per cent occupied, erupted after Malinga, who made six runs off four deliveries, whacked a Jacob Oram delivery over long-on for the maximum, which was his only scoring shot.

"It does not surprise us. We are happy that people of Bombay (Mumbai) support good cricket. Even in the first match in this stadium between New Zealand and Canada the crowd was good," Mumbai Cricket Association joint secretary Lalchand Rajput said.

He said about 11,500 spectators were present for Sunday's game, which was among the highest for non-India games, involving the minnows of world cricket.

According to MCA officials, apart from the low prices of tickets for the non-India games, the newly refurbished Wankhede Stadium has become one of the chief attractions for the spectators.

"Though India does not have a single league match at the Wankhede, the newly built stadium in itself has been a major attraction," they said.

Sunday's match between New Zealand and Canada was the first international match hosted by the refurbished stadium, since undergoing revamp from mid-2008. 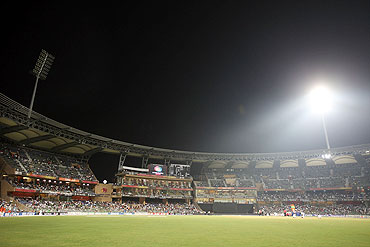 Image: A floodlight fails at the Wankhede Stadium during the match between New Zealand and Sri Lanka on Friday
Photographs: Getty Images

The Wankhede Stadium, venue for the World Cup final on April 2, suffered yet another embarrassment when a light tower suffered a power failure during the match between Sri Lanka and New Zealand on Friday.

The incident occured when New Zealand were trying to chase down Sri Lanka's total of 265-9 but the players barely noticed the blip as there was enough light on the ground.

"One of the generator sets on which the floodlight towers operate suddenly malfunctioned... but we immediately switched it on to alternative electric power and the lights were back on after seven minutes or so," Mumbai Cricket Association secretary Lalchand Rajput said.

"Also, we have an arrangement such that there is enough illumination to continue the game even if such an accident occurs."

In the lead-up to the tournament, the stadium was criticised by the city's top fire chief for not meeting safety standards before the organisers hastily fixed problems and it was declared safe days later.

A mad scramble was also required to complete the construction work at the renovated stadium, which got an extension from the ICC to complete pending work. 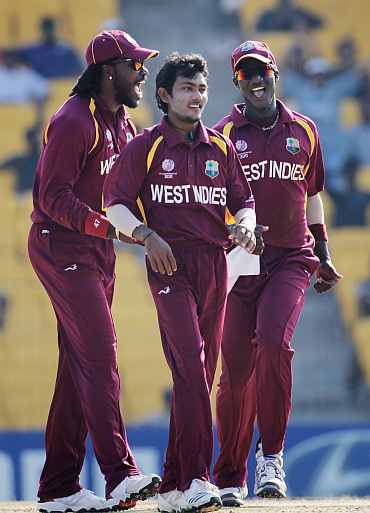 It was more than a dream come true for young West Indian spinner, Devendra Bishoo, as the tweaker revealed that it was his father's dying wish to see him don Caribbean colours.

"I always wanted to represent the West Indies and I achieved my goal. But it was more than that. It was what my father wished for," said Bishoo whose father, Mohanlal, died 17 years ago.

- The 50 most valuable players of the World Cup

The 25-year-old Guyanese, who was drafted into the World Cup squad as a replacement for the injured Dwayne Bravo, made an impressive beginning to his career when he dismissed Jonathan Trott, Eoin Morgan and Luke Wright to return with match figures of 3-34 against England on Thursday.

"When I got the news that I would be playing in the match against England, I immediately thought about my father and what he wanted for me," said Bishoo.

"After he died it was just myself and my mother and she also encouraged me to achieve my goals. I know she is very happy and if my father was here I know he would been very happy too," the leg-spinner added.

"I remembered the times when I used to get home from school and I would spend a lot of time bowling at my father.

"He realised that I could be a good bowler and he would give me the chance to bowl and learn as much as I could. He was a great help to me and I am happy I have made him proud, even though he is not here to see me," the bowler said. 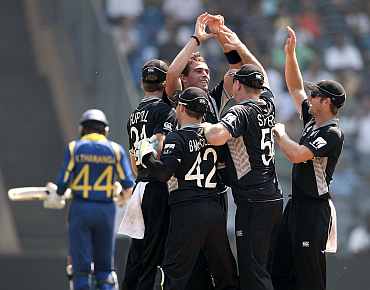 Four persons were arrested on Friday on charges of betting during the World Cup match between Sri Lanka and New Zealand.

- NZ, Lanka in a 'catch' controversy

Acting on a tip-off, police conducted a raid at the residence of one Nagesh Rangrej in Bagalkot, Karnataka, and seized Rs 95,100, three mobile phones and two motor cycles.

Besides Rangrej, three others were also arrested, police said. With this the number of those arrested in connection with the betting racket has gone up to 25.