A betting racket, in connection with the India-England World Cup tie played in Bangalore on Sunday, was busted and two persons arrested thereafter, a top police official said.

Eight other bookies, however, managed to escape.

The accused, Dinesh Kumar (36) and Vadivelu (34), were arrested by the City Crime Branch special squad during a raid in Jayanagar area yesterday, Police Commissioner Shankar Bidari said in a statement.

An amount of Rs 2 lakhs was seized from Dinesh Kumar, who had collected the money from punters.

In addition to this, eight mobile phones, an LCD TV, one paper sheet containing details of persons and amount involved in the betting were also seized, the release said.

It said Dinesh Kumar also disclosed the names of other bookies who escaped. They are Narahari, Soni Mukesh, Harish, Bachan, Lokesha, Seebu, Tiger and Akkipet Babu.

Kumar was also in touch with bookies from Mumbai and Delhi and used to transact with them. Investigation has revealed that the accused were in the cricket betting racket for the last 10 years, the release said. 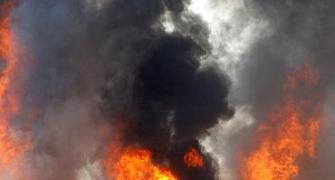