Statistical highlights of Monday's Group B match between the West Indies and the Netherlands at the Feroze Shah Kotla in Delhi.

# West Indies' magnificent 215-run win is their biggest by runs margin in the World Cup, bettering the 191-run victory over Sri Lanka at Karachi on October 13, 1987.

# West Indies' aforesaid win is also their biggest by runs margin in ODIs, bettering the 208-run win over Canada at Kingston on April 13, 2010.

# West Indies' said victory is the sixth joint-highest in terms of runs in the World Cup.

# West Indies (330 for eight) posted the highest at Feroz Shah Kotla, New Delhi, surpassing the 303 for eight by Pakistan against India on April 17, 2005.

# Netherlands (115) posted their lowest total in the World Cup, surpassing the 122 against Australia at Potchefstroom on February 20, 2003.

# Chris Gayle and Devon Smith, with their 100-run opening partnership, established a record for the West Indies against the Netherlands, eclipsing the 82 (unbroken) between the same pair at Dublin on July 10, 2007.

# Devon Smith (53 off 51 balls) posted his fourth fifty in ODIs -- one each against South Africa, Bangladesh, England and the Netherlands.

# Smith registered his second fifty in the World Cup. He had posted 61 against England at Bridgetown on April 21, 2007.

# Kemar Roach got the Man of the Match award for the first time in limited-overs internationals.

# Kemar Roach is the first bowler to capture six wickets in an innings against the Netherlands in ODIs.

# Roach's aforesaid figures are the best by a West Indian in India, surpassing the 6 for 29 by Patrick Patterson against India at Nagpur on December 8, 1987.

# Chris Gayle's brilliant 80 off 110 balls is the third highest knock at Feroz Shah Kotla in the World Cup - the top two scores are 137 by India's Sachin Tendulkar against Sri Lanka on March 2, 1996 and an unbeaten 107 by Abraham de Villiers for South Africa against West Indies on February 24, 2011.

# Kieron Pollard (60 off 27 balls) registered his maiden World Cup fifty.  His career-best in ODIs is 62 against Australia at Brisbane on February 14, 2010.

# Pollard's 23-ball half-century is the fourth joint-fastest in the World Cup.

# Kemar Roach (6/27) produced his first five-wicket haul in the World Cup, his second instance of five wickets in an innings in Limited-Overs Internationals.

# Roach is the first bowler to capture five wickets or more in an innings at Feroz Shah Kotla, Delhi, in the World Cup. His impressive figures are the best by any bowler in the World Cup in India.

# Roach (6 for 27) became the second West Indian bowler to claim six or more wickets in an innings in the World Cup. Winston Davis had bagged 7 for 51 against Australia at Leeds on June 11, 1983.

# Roach is the first West Indian and the sixth bowler to achieve a hat-trick in the World Cup. The first five bowlers to perform the feat were Chetan Sharma, Saqlain Mushtaq, Chaminda Vaas, Brett Lee and Lasith Malinga.

# Wesley Barressi registered his third duck in OdIs - his first at the World Cup. 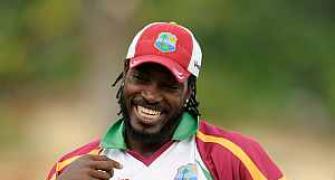 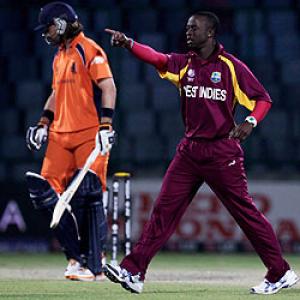 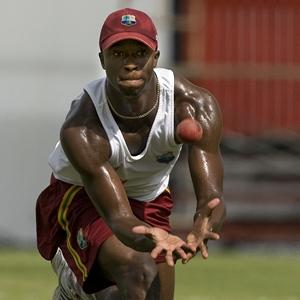