Sri Lanka self-tested its fragile middle order ahead of the big match, as they stuttered to a five-wicket win against New Zealand in Colombo on Tuesday.

The ask was simple. Get 218 in 50 overs. Copule of days ago, their openers had single-handedly shown exactly how it was done. Today, they put on 40 runs for the first wicker before they were separated.

Tharanga started like he had learnt his lesson from the England game, where he had to scamper for his 100 as the target was fast whittling down. He hogged the strike and was making good of it too.

But in the eighth over off Tim Southee, he chased a wide half volley and scorched it to the left of point, where it was intersected by a low-flying Jesse Ryder. He had made 30 off 31 balls.

Sangakkara joined Dilshan in the middle as New Zealand erected their six-man circular wall around the ring. It took all of Sangakkara's class and Dilshan's audacity to break this formation.

Around this time, the duo were aided by some lacklustre Kiwi bowling.

The 'bowl-straight-field-tight' tactic began to fray at the edges, as Dilshan and Sangakkara methodically dispatched the bad balls around the park.

Sangakkara began threading boundaries through the tight off-side field, even as Dilshan took the aerial route. Shackles broken, they dominated in a period of five overs before Dilshan's fall as they knocked off 38 runs from the ask.

Then, Dilshan played a tired shot to Ryder at point, again off a bad Southee ball. And Mahela Jayawardene walked in and walked out as Vettori trapped him leg before.

Even as New Zealand smelt blood, Sangakkara guided a short ball straight to Scott Styris at third man, making it 169/4 in 36 overs.

The Kiwis got the spring back in their steps and their prowlers in the ring were back, choking the untested Sri Lankan lower order. 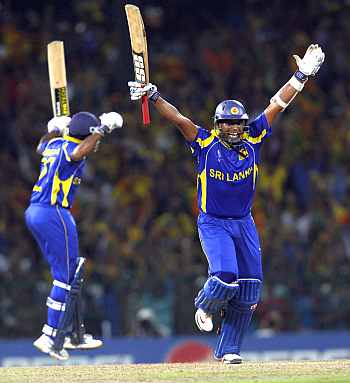 The next five overs brought a mere seven runs for Sri Lanka as Kiwis slammed the brakes on the chase.

Then, inexplicably, Daniel Vettori, who had bowled himself much earlier, brought on Jesse Ryder for the first time in the 38th over with 42 needed off 54.

Nathan McCullum had 4 overs left, Southe had 3, and Oram and McKay had two each.

That over cost 9 as Chamara Silva creamed Ryder past point and nudged one past the keeper. But in the next over, Silva chopped one from Southee back on to his stumps.

But then, Vettori -- probably not trusting his spinners enough -- brought him back again for a second over, which cost five.

From there on, it was all downhill for New Zealand as Samaraweera and a limping Angelo Mathews kept their nerves to see their side off comfortably.

As New Zealand leave their sixth World Cup at the semi-final stage, it is worth saluting their fielders, a collective of 11 men who were never good enough to compete with the best either with the bat or ball, but were head and shoulders above everyone else when they were on the field.

Today, the arc between point and cover was buzzing like it was Heathrow airspace in rush hour. Ryder, Guptill and Oram were like low flying aircraft intercepting anything hit in the arc and strangling the Sri Lankans for runs.

If only their batsmen had scored 20 runs more, or if their bowlers had bowled two more tight overs.

Earlier, when Ross Taylor and Scott Styris came together, they took it upon themselves to pull New Zealand out of the hole, which its top order had voluntarily dug the team into.

Opener Brendon McCullum went after Ranganna Herath, who had opened the bowling with Malinga.

Seeing that there was no help off the pitch for Lasith Malinga, skipper Kumar Sangakkara switched to Angelo Matthews in the third over.

McCullum came up against Herath constantly and in the fourth over, played off a maiden, with the left arm spinner getting some purchase off the wicket. But off the first ball of the sixth over, McCullum seemed like he had had a good look at Herath, took a forward stride and sent the ball sailing over the midwicket ropes.

In Herath's next over, he tried to repeat this shot, but missed the line, as the ball hit the top of offstump.

Jesse Ryder joined Martin Guptill but the two could add only 37 in the next 12overs, as Sangakkara brought Ajantha Mendis and Muttiah Muralitharan into the mix.

Murali started off around the wicket and Ryder constantly looked to back up to the on-side and hit him through the off. It paid off once, took an under-edge the second time and had him edging it to the keeper on the third occasion.

With Ross Taylor yet to settle down and Guptill unable to rotate the strike, Sangakkara brought on Malinga with a semi-old ball in the 22nd over. After two attempts, Malinga got his radar working and aimed an unplayable inswinging missile right on the base of Guptill's stumps. The score was 84/3.

This is when Scott Styris walked in and set about working the Sri Lankan bowling. He took the attack to Malinga and played the spinners with confidence, collecting singles and twos and the odd three along with Taylor.

Soon, the 50-runs partnership was up and Sangakkara was called upon to make a move for the first time in a match and a half. He brought on his most experienced bowlers, Murali and Malinga, and when they were handled with comfort, looked to Mendis.

In the 40th over, Taylor, looking to up the temp before the powerplay, hit Mendis straight down the throat of midwicket.

The batting powerplay was taken in the 42nd over and Malinga came on. Kane Williamson dispatched a full length delivery to the midwicket fence and Malinga responded with an attempted inswinging yorker.

It turned into a near beamer and looked like it would clean up Williamson, not the tallest Kiwi. But he stepped out of its line and smashed it over the off side field for three. Williamson faced up to Murali in the next over and redeemed himself with two lofted shots on the off side to fetch 10 off the second over too.

New Zealand had scored 41 in the five powerplay overs by the time Murali ran in to bowl his last ball in Sri Lanka. He took his bow in style as he trapped Scott Styris leg before.

With his departure, Jacob Oram needed to see off New Zealand to the finish line, but he perished trying to hit out at Dilshan, and Mendis cleaned up the tail to close the innings at 217. In keeping with the powerplay curse, New Zealand had lost their last five wickets for 13 runs and with it the match.