Virat Kohli's return after a well-earned break couldn't have come in a more unenvious setting, as he needs to tread the fine line between tough and prudent in his selection calls when India take on New Zealand in the second and final Test at the rain-soaked 'Maximum City' from Friday.

After an anti-climactic end to the first Test, which saw New Zealand escape with a creditable draw, defying the Indian spinners on a slow turner, the home team, under its regular captain, will certainly go for a slight rejig in the combination.

Also, at the Wankhede, the hosts may only get four days to enforce a positive result, as the heavy rain that lashed the city over the last two days could be a dampener on Day 1. The underlying moisture could also bring an extra Black Caps pacer, Neil Wagner, into the equation.

Historically, Indian cricket teams have never believed in a shake-up of the status quo and therein lies the problem that Kohli and new coach Rahul Dravid face with the current set-up. Two of the team's players haven't been scoring runs.

Shreyas Iyer, who scored 105 and 65 under pressure in the first Test in Kanpur, is not assured of a place despite a dream start to his career.

It happened with Karun Nair after a triple ton, but one could argue that it came in an inconsequential fifth Test against a tired attack and the team wasn't under any pressure.

While the spotlight is on Ajinkya Rahane for all the wrong reasons after 12 successive failures in 2021, it is unlikely that the man who captained India in the last Test will be dropped in the very next game due to lack of form.

That too on his home turf. But every extra chance given to him effectively means that criticism about not sending a strong signal would get louder.

The second cause of concern is Cheteshwar Pujara, who has time and again forgotten that cricket is not merely about survival. Every Test at home or abroad, every bowling attack -- formidable or run of the mill -- has put him in a spot.

He looked to have a changed his mindset briefly in England, but in Kanpur he again got himself into the rut.

However, when the team travels to South Africa, Kohli knows that he has only one man who can blunt the new Kookaburra against Kagiso Rabada and Anrich Nortje.

So Pujara and Rahane backers can rejoice as their favourite players aren't going anywhere for this game unless they are injured.

The Kohli baiters would then say that it's not just Rahane who hasn't been scoring for two years, even India's skipper hasn't had a three-figure mark against his name in any form of the gaame for more than two years now.

Now with Dravid for company, someone famous for taking a middle of the road approach, one can certainly expect that Mayank Agarwal will be disposed of for perhaps being a low hanging fruit.

Shubman Gill scored an attacking fifty in the first innings and despite his not so great defensive technique with a yawning gap between bat and pad, he will be persisted with as he is being looked as a long-term middle-order solution.

Kohli will be a straight replacement for Agarwal. The question then arises on who will open alongside Gill.

It either has to be Pujara or wicketkeeper-batsman K S Bharat.

Pujara could turn out to be a poor choice given his current form, while Andhra man Bharat has the requisite experience at the first-class level with a highest score of 308.

Bharat replacing Wriddhiman Saha, who has been suffering from stiff neck, could actually save the team management from actually taking tough calls for the match. IMAGE: Pacer Neil Wagner could be brought into the New Zealand XI for the second Test in Mumbai. Photograph: Getty Images

For the Kane Williamson-led New Zealand, they missed Wagner badly in Kanpur where his presence could have spelt more trouble for India in the second innings. Rain and a pitch devoid of sunlight could mean that both pacers and spinners would be in equation.

New Zealand's three-pronged attack could spell trouble for India on a spiced-up track and Will Somerville, who played a gutsy knock in Kanpur, might have to sit out.

India may bring in Mohammed Siraj into the equation with Ishant Sharma looking completely out of rhythm, but with turn expected, three spinners may be persisted with. 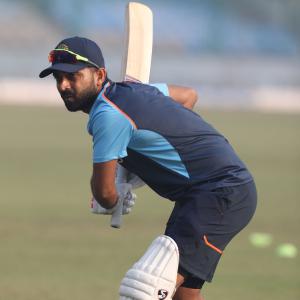