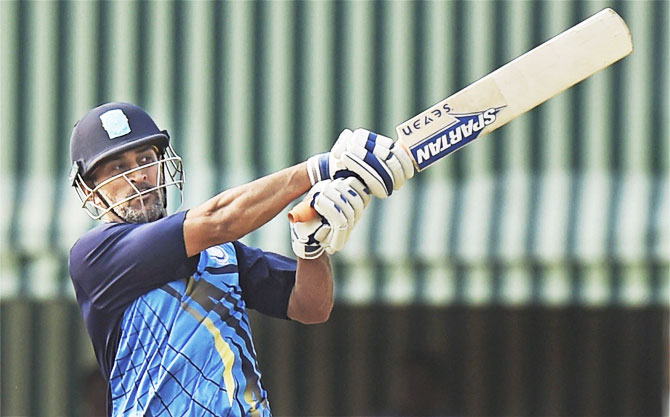 Mahendra Singh Dhoni led-Jharkhand made it to the quarter-finals of the Vijay Hazare Trophy with a six-wicket thrashing of Jammu and Kashmir in Kalyani, West Bengal, on Monday.

Their campaign in tatters after their 21-run loss to Hyderabad, Jharkhand not only needed a big win against Jammu and Kashmir but wanted Hyderabad to lose to Services.

Hyderabad had cleared Dhoni's hurdle at EdenGardens in the afternoon by losing to Services after they were shot out for 88 in 28.5 overs.

At the BengalCricketAcademy, about 50 kilometres from Kolkata, Dhoni entertained his fans with an unbeaten 19 off 17 balls (2x4, 1x6) to take his team to a resounding victory.

Chasing 185, which was possible after Shahbaz Nadeem's (5/42) second five-wicket haul bowled out Jammu and Kashmir in 43 overs, Dhoni finished the game in his trademark style, with a huge six over fine leg.

He pulled Mehjoor Ali to seal the chase with 15 overs to spare as Jharkhand joined table toppers Karnataka in the quarter-finals from Group D. The knock-out round will be played in Delhi from March 13-18.

Top-order batsmen Jitesh Sharma (83) and Ganesh Satish (73) hit half-centuries as Vidarbha trounced Assam by 104 runs to finish on top of Group A points table at the Vijay Hazare Trophy in New Delhi on Monday.

Sharma and Satish forged a 99-run partnership for the second wicket in 16.5 overs to help Vidarbha score 273 for 9. Siddhesh Wath and Apoorv Wankhade hit 35 and 32 respectively to boost their team even as as the lower order failed to contribute.

Vidarbha then returned to dismiss Assam for 169 in 41.1 overs, riding on off-spinner Abhishek Chaurasia's 6 for 37 at the Karnail Singh Stadium.

Assam's chase was fuelled by Rishav Das's 96-ball 57 but none of the other batsmen could provide any support to the opener.

In another match, Haryana notched up a 85-run win over Baroda at the Feroz Shah Kotla but it was not enough for a spot in the quarter-finals.

Dagar and Tewatia shared an unbroken 136-run stand for the sixth wicket to provide the late charge.

Haryana then dismissed Baroda for 181 with new-ball bowlers Sanjay Pahal and Ashish Hooda snapping three wickets each to spark the collapse.

In another match, Odisha beat Punjab by 69 runs, riding on skipper Govinda Poddar's third List A hundred at the Palam ground.

Left-arm spinner Dhiraj Singh then returned with a career-best figure of 5 for 49.

Shubham Gill (41) and Anmolpreet Singh (58), who represented India in the Under-19 World Cup in Bangladesh last year, were the top scorers, but their middle and lower-order failed to put up a fight to be eventually bowled out for 171 in 30 overs.

Bengal, Gujarat in last-8; Shami goes wicketless on his return

Ranji Trophy champions Gujarat rode on Jasprit Bumrah's three-wicket haul and Parthiv Patel's 88 to make the quarter-finals of the Vijay Hazare Trophy after beating Bengal by seven wickets in a Group C match in Chennai on Monday.

However, despite losing, Bengal topped the Group C table with 20 points and booked a berth in the last-eight stage of the tournament.

Meanwhile, Ranji Trophy finalists Mumbai failed to make the cut, finishing third in the points table after Bengal and Gujarat from Group C.

Gujarat toppled Mumbai with higher net run-rate. Both Gujarat and Mumbai finished with 16 points each but the former advance to the knock-out round, winning by a huge margin over Bengal today and significantly improving their run-rate.

Put in to bat, Bengal were bundled out for a meagre 168 in 49.1 overs and then Gujarat reached the target in just 28 overs, losing just three wickets in the process.

Bengal batsmen simple failed to settle down, losing wickets at regular interval to be all out below 170-run mark.

Only three Bengal batsmen could put on 30-plus score.

Tamil Nadu trounced Tripura by 262 runs to enter the quarter-finals as table toppers from Group A in the Vijay Hazare Trophy in Cuttack on Monday.

Tripura came a cropper in their reply, folding up for 75 in 18.2 overs pacer Aswin Crist picking up five wickets.

With the thumping win, Tamil Nadu topped the group with 20 points. The other team to qualify for the quarter-finals from Group B is Maharashtra, who too ended with 20 points but finished behind Tamil Nadu due to an inferior run rate.

In other Group B matches today, Delhi defeated Uttar Pradesh by 112 runs for their third straight win of the tournament. However, they were already out of the tournament after losing the first three matches.

Unmukt Chand, brought back into the Delhi team, proved his worth with a well made 78, his second straight half century that helped his side post 220.

Left-arm pacer Kulwant Khejroliya starred with the ball, ripping through the UP batting to end with figures of five for 22 in eight overs.