Over the past few years, India's fast-bowling arsenal has risen through the ranks to be counted as one of the best in international cricket. With the big-picture UK tour coming up -- World Test Championship (WTC) final against New Zealand and five Tests against England -- fans will once again hope for the pace-bowling battery to rise to the occasion.

Umesh Yadav, who has been a tried and tested performer on the big stage, is looking to once again put up match-winning performance when the opportunity presents itself and says he would like to win the World Test Championship (WTC) final which is equal to winning the World Cup.

Umesh opened up about his preparation ahead of the WTC final, the role of skipper Virat Kohli in developing such a potent pace attack, and how challenging it would be to bowl in England.

"The only preparations going on right now, during the lockdown, is of individual physical fitness and being strong mentally. We are all trying to stay positive and just looking forward to playing the World Test Championship final. We are all training individually now so that when we come together we are even better," said Umesh.

"Yes, Ishant Sharma and Ajinkya Rahane are correct. As a player when you are playing Test matches, the WTC is like a World Cup for you. It's very uncertain if we are going to get to play ODIs in the near future. So, as a Test match player, WTC is like a World Cup only. I also think the same. WTC final is different because you reach at that place by defeating a lot of good teams," he added.

When asked about how challenging life inside a bio-bubble can get for a player, Umesh said: "Yes, definitely it is difficult because once your quarantine is over, the bio-bubble life starts. Until 10-15 days, it is all great, but then it starts to get a little exhausting because you are in the same place in a limited area and you cannot go beyond that. So, being mentally strong and keeping yourself fresh is very important."

Umesh, who has managed to take 148 wickets from 48 Test matches, also spoke about the role of skipper Kohli and head coach Ravi Shastri in ensuring that every player in the side has the desired confidence to take their game to the next level.

"Virat and Ravi bhai have worked really hard. The way Virat has captained and handled the team, the freedom and confidence that the captain and coach have given to the team keep a lot of weightage because as a bowler or a batsman when you can play at your free will and freedom you definitely perform so much better. When the team steps down on the ground, there is a kind of aggression, a feeling of backup and support. All 11 players are in sync with each other. So, coaches and captain deserve the credit for that. The players are very comfortable, there is a team spirit and good environment," said Umesh.

When asked whether winning in England would be like conquering the final frontier, Umesh said: "When you start playing you always think that no matter what the situation is, you should know how to win even in the toughest of conditions. I feel that winning against strong teams like England and Australia have been a good journey. So you get a feeling of satisfaction and you know that your team is headed in a good direction and I feel India has been doing so for the last 5 years."

The 33-year-old pacer stayed humble when asked whether India has the best bowling attack in the world right now, and he added that everybody in the team prides themselves on working hard.

"Can't say if India has the best fast-bowling attack in the world or not because there are so many teams with incredible talents. I'm sure as of now for India our fast bowling attack is the best and we are trying to improve and work and train on all our areas," he said.

"It depends on the situation and the condition when we play the match. A lot of times, when we start bowling, the sun comes over and it gets dry in England due to the sun. So, the ball doesn't do enough movement then. When it's cloudy, then the ball also swings well. So, if we throw the ball in our control and in our discipline while playing in England, then that's the best otherwise it is difficult. So, to bowl with patience and discipline will be very important for us," Umesh signed off. 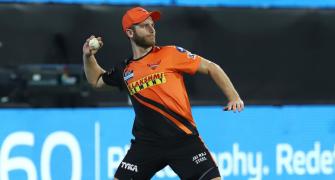