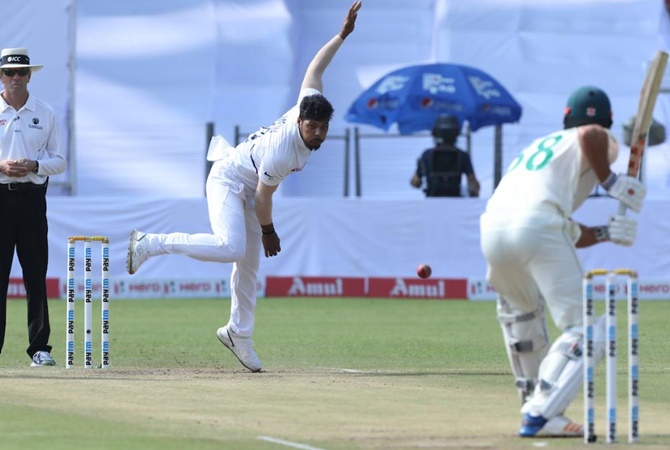 There is no dearth of talent in India but the youngsters have a fair idea that they have to be better than the existing bunch of seasoned campaigners to break into the national side, reckons senior pacer Umesh Yadav.

The Vidarbha speedster feels that the current lot has gained rich experience over the years and is setting the benchmark for the next batch of players.

"Most of the boys in this set-up, at least 7-8 have played 40 plus Tests. So when the youngsters, who are coming up, see the kind of hard yards seniors are putting in, it's not easy for them. They know that they need to get better than us to be in the side," Umesh said after the match.

Umesh savoured a six-wicket match-haul in India's big win in the second Test but he knows that it's not a great position to be the fourth choice pacer in the side when Jasprit Bumrah is available.

"It's not in my hands. I can't say that I will play all Test matches. All the bowlers are doing well, there is a healthy competition and everyone will get their chances at some point or other. I am ready for that and that's my mindset."

So his solution was to speak to the national selectors and ask them to include him for the India A games.

"When I didn't play in the West Indies, selectors put me in India 'A' team for South Africa 'A' series. But when there is a big gap with ODIs, T20s being played, I told the selectors that whatever match is there, let me play as match practice is very important for me."

"Suddenly, you come from home and play a match, it can be a tad difficult as a fast bowler,” he reasoned.

Wriddhiman Saha took two brilliant catches in both innings of his bowling and especially the second down the leg side to dismiss Theunis de Bruyn and those were certainly morale booster.

"The catch that Wriddhi daa (Wriddhiman Saha) took was unbelievable. Even the catch that he took off Ash's bowling while juggling 3-4 times, was commendable. He has taken many such catches off my bowling."

"He has an idea that I tend to drift towards leg-side at times. The manner in which he kept was brilliant," said the bowler who has 125 wickets in 42 games.

He said all bowlers wanted to go out and bowl by enforcing a follow-on on the Proteas.

"We bowled in short spells and we were not tired at all. All the bowlers said that we would like to go out there and finish the job. We didn't want a break and let batsmen bat for some time and stretch it."
Umesh was also happy that on a flat deck, the team management thought of going with five bowlers.

"There was bounce in the track but lacked pace. We had to hit the deck hard to extract the pace. The fast bowlers will come and send down three overs with full intensity and then spinners will come in. I think, this was a good idea. We could execute what we wanted," he concluded. 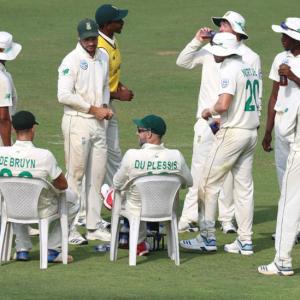